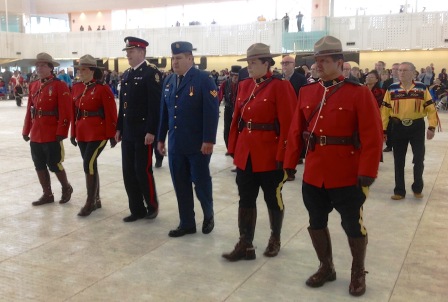 The age-old proverb, Crime Doesn’t Pay, is not only true but multifaceted as well. When bad-guys, and gals are caught breaking the law there are consequences, not just to the perpetrators who face time in a provincial or federal prison, but to society as a whole. Not only does a person serving time in jail lessen the strength and resiliency of their own families and communities, they cost everyone money. The facts are simple: it costs more than $344 a night to incarcerate one youth; the average cost of a sentence exceeds $12,000 and if probation comes into play there’s an added cost of $2821. The costs are far higher when it comes to criminal acts related to gang-culture. 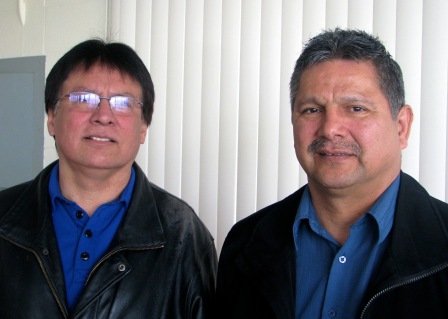 “Out of 140 files relating to gang activity in the last six months, one small community was near a million dollars; to be exact, $917,500,” noted RCMP Aboriginal Policing Services (APS) Aboriginal Gang Coordinator Clay Bird, talking about the costs related to criminal activity. “Crime doesn’t pay; in fact it costs everyone. We understand that there is suffering in the communities, there are misunderstandings, there are mistrusts, but we need to work together for change to take place.”

Gangs, often violent and often involved in the sale and trade of hard drugs, have grown in recent years and are just as prevalent in the Aboriginal communities as they are in any other. Kids turn to gangs because they want to belong to something; they want to be needed and appreciated and they want to feel useful. Bird and his partner Darrel Bruno, understand the disadvantages facing Aboriginal youth and they want to make a difference.

Bruno, who retired from the RCMP in 2009 as a Staff Sergeant with 25 years on the job, returned as a civilian contractor in 2012. As Crime Prevention Coordinator with the RCMP’s APS unit, Bruno says the key to eliminating gangs is by working in a proactive manner with Indigenous communities and RCMP detachments across the province.

“Our plan of action,” noted Bruno, “directly relates to the strategic goal of ‘Safe Homes, Safe Communities’ and is tailored to the Strategic Priorities Aboriginal Policing, Youth and Community initiative.”

K Division RCMP Aboriginal Policing Services is currently developing crime and prevention initiatives tailored specifically to meet the needs within a particular community’s environment, needs that are considered to be at the root causes of crime.

“Our crime and gang prevention initiatives are uniquely tailored to meet the needs of the community environment and address such issues as health and community wellness,” noted Bruno. “There is a desire to know and understand the nature and scope of the local community dynamics, in terms of health, safety and economic issues so that approaches to reducing victimization, gang violence and preventing crime are far more effective and target the right point of intervention for prevention.”

The residential school era took a heavy toll during its 150 year reign over Aboriginal peoples and their cultures; the healing continues today, as it will long into the future. As a result of that horrific time in Canada’s history, which ended with the last school closure in the mid-1990’s, most of the country’s three distinct Aboriginal peoples (First Nations, Métis, Inuit) continue to face the consequences brought on by decades of stereo-typing and marginalization. Poverty, housing shortages, education gaps, gang activity, ongoing health issues, high mortality rates, high school drop-out rates, child abuse, broken families, addictions problems and inadequate water and sewage systems in many communities are all related and /or connected to residential schools and the marginalization of Aboriginal peoples, their cultures, traditions and spiritual beliefs.

“We believe that Crime Prevention through Social Development (CPSD) is an approach to preventing crime that recognizes the complex social, economic and cultural processes that contribute to crime and victimization,” noted Bruno. “The CPSD initiative seeks to strengthen the bridge between criminal and justices policies and programs and the safe, secure and pro-social development of individuals, families and communities.”

This is achieved by “tackling the factors that contribute to crime and victimization that are amenable to change.”

The five key elements to the CPSD initiative include cohesion, community, coordination, cooperation and communication.

“It all begins with communication; without it positive change is difficult to achieve,” assured Cst. Clay Bird. “The CPSD strategy embraces the principles of shared responsibility at the local community level. The initiative involves working with communities, individuals and stakeholders because gang reduction and crime prevention require a concerted effort not only by all levels of government, but also by police, community members, businesses and individuals working together. Aboriginal gang and crime is a complex problem that requires a multi-faceted and comprehensive approach. Our goal is to eventually see all First Nations communities talking and working together to resolve the social issues each of them faces. Community involvement is imperative; when the community comes together and decides that change is needed, positive change takes place. An example of this can be seen by the actions taken by the Chief and Council and citizens at Maskwacis, who have successfully eliminated much of the stress they were under when gang activity was rampant. The programs and curfews they put in place have had a significant impact in the community and as a result gang activity in Maskwacis, though not completely silenced, has brought about significant reductions in crime and criminal activity.”

The RCMP’s Aboriginal Policing Services branch is involved in various aspects of crime prevention and works with communities, businesses, individuals and schools in an effort to ensure a better future for Canada’s fastest growing population.

“We visit communities across the province to address some of these issues,” noted Bird. “We also visit and play an active role in the schools, many of which have invited us to talk to their students about career opportunities in the RCMP. We actively support schools and communities and are involved in initiatives that include pre-cadet and cadet programs, summer student programs and sports programs,  which all help young Aboriginal students understand the important roles that await them in the future.”

Community participation is crucial to the success of the initiatives put together by the Aboriginal Policing Program and community engagement is high on the priority list.

“We want to see communities take ownership of these initiatives,” agreed both Bruno and Bird. They said that process begins by focussing on community engagement and on the mobilization of Aboriginal communities.

“Children are not born to be criminals or to become members of gangs but they often end up in that situation because of what they learn from others,” noted Bruno. “If parents or guardians are involved in deviant or criminal behaviour and break the law in front of their children, the child is at a greater risk and may become involved in that same pattern of behaviour. If a child isn’t receiving guidance or supervision, he or she is at risk of becoming involved in gang activity. Children often become a product of the environment they are raised in. That’s why it is important to note that everything begins in the home. Happy, successful and loving families are key to happy, healthy and loving children. We encourage parents, grandparents and family members to stop and think before they act and to understand that a child’s future depends largely on the experiences they encounter as they progress from infancy through adolescence and into adulthood.”