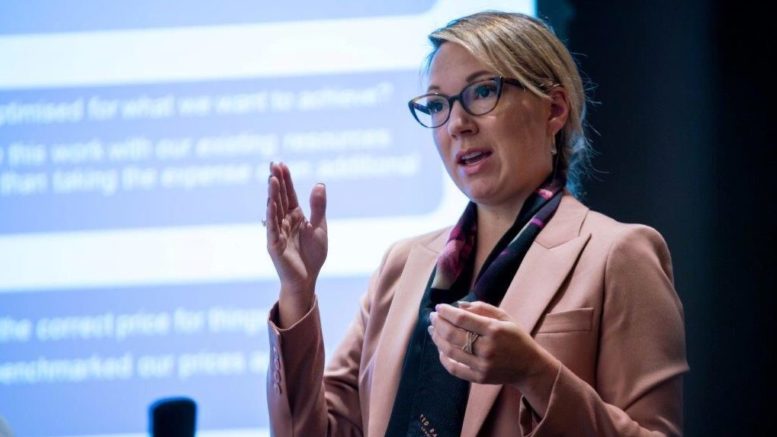 (ANNews) – On March 8, International Women’s Day, a federal task force on Women in the Economy was created to advise the federal government on a pathway to a national feminist economic recovery from the pandemic.

On March 15, PhD Student Raylene Whitford was appointed to the task force.

“The setup of this group is very non-traditional,” said Whitford, a PhD student in the Faculty of Native Studies and the Alberta School of Business, and founder of Canative Energy. “They’ve brought together an amazing cross-section of women from different industries and experiences. It’s wonderful to be a part of and contribute to this.”

The task force is co-chaired by Deputy Prime Minister and Finance Minister Chrystia Freeland, and Minister of Middle Class Prosperity Mona Fortier. It also consists of 17 other women from across the country.

“Over the past year we have seen the alarming impact of this pandemic on women’s economic participation … Canada’s future prosperity and competitiveness depend on the ability of women to participate equally—and fully—in our workforce,” said Minister Freeland.

The COVID-19 pandemic has had a disproportionate effect on Canadian women as they have faced steeper losses in jobs, wages, and hours. Since February 2020, more than 80,000 women aged 15 and older have left the labour force, compared with about 25,000 men.

“We know that women have paid a particularly high price due to the impacts of the pandemic. The steep job losses have impacted women the most,” stated Minister Fortier. ”

Mothers have had to take on more responsibilities around the home to support children who are learning virtually. And women have been at the forefront of our collective fight against COVID-19, as they represent the majority of essential workers in healthcare, education and other core frontline sectors.

“Today, on International Women’s Day, I am proud to announce the members of the new Task Force on Women in the Economy. Their diverse perspectives will help our government make smart, targeted investments through Budget 2021 and beyond to advance gender equity and address the systemic barriers and inequities faced by women, including Black, Indigenous, and people of color – so that Canada’s economic recovery leaves no one behind.”

The group will be discussing possible recovery strategies over the next year.

“This task force is all women focusing on a feminist recovery, and that’s really special,” Whitford noted. “Most of the spaces I’ve worked have been very male-dominated, so I have rarely had the opportunity to join a group of professional women of various backgrounds and specialities, and they’re able to speak openly and honestly with each other.

“I am the only committee member with an international background in finance, the only one from oil and gas. However, I see my primary role as being an advocate for Indigenous women, as I understand the issues that are faced at the community level.”

The Task Force will hold its first in a series of meetings in early March, in the lead-up to Budget 2021.

Premier declares Alberta is in a public health emergency