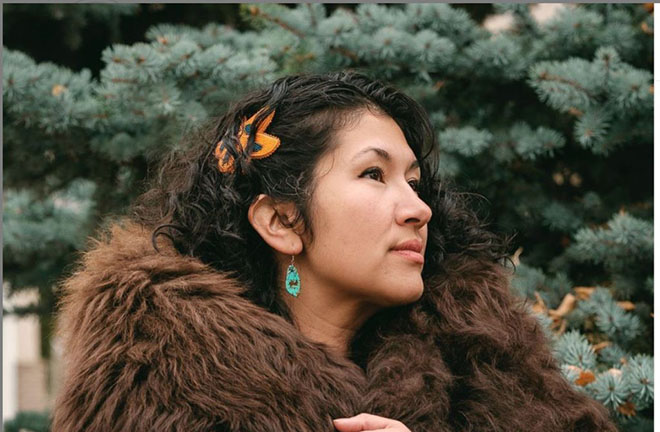 Artist Amy Willier co-owner of Moonstone Creation Gallery in Calgary passed away on January 22, 2021 at the age of 38.

(ANNews) – Early this year, Amy Willier — a Cree artisan and entrepreneur in Calgary — passed away at the age of 38.

Willier ran Moonstone Creation art gallery in Inglewood with her mother , Yvonne Jobin, for over a decade. The gallery provides cultural learning sessions and represents over 75 local Indigenous artists with a worldwide customer base.

Melrene Saloy-Eaglespeaker, a close friend of Willier’s, said that the Moonstone Gallery is  “internationally known, award-winning … they’re one of those stops you make when you come to Calgary.”

”Amy was so knowledgeable on every item, every artist, where it came from. She just took so much pride in the store, of being able to represent over 75 local Indigenous artists and to be able to talk about each one so passionately.”

The loss of Amy is being felt by Calgary and throughout the art community she was a part of, with many different dedications, tributes, and awards being established in her honour.

Quickdraw Animation Society published a release which mourned the passing of Willier that said, “We are absolutely heartbroken to learn of Amy Willier’s passing. Amy was a vital part of so many communities, and Quickdraw was fortunate enough to be one of them. From the joyful animations she created with her son Colton, to the masks our staff have been wearing since the start of the pandemic, to the friendship and inspiration she gave, her contributions will be felt for a long time to come.”

“Our most heartfelt condolences go out to Amy’s friends and family, and to the many, many others who are coming to terms with her loss.”

Quickdraw Animation  also posted two animations that Willier made to their website.

In honour of Willier, Festival Hall in Inglewood is hosting an augmented reality mural. The mural features art from local artist Tank Standing Buffalo accompanied by works from local music group Ghostkeeper, both of whom collaborated with Willier in the past.

Kerry Clarke, artistic director for Calgary Folk Music Festival said, “She was what’s called a knowledge keeper, she also was a mentor and an artist herself. A really central person in this community.”

“A festival neighbour and Inglewood neighbour.”

Now Avenue Magazine’s annual Made in Alberta Awards have also added a permanent category to their awards called the Amy Willier Award for Indigenous Artists. This category is open to all Indigenous makers and Indigenous-owned businesses and is free to enter.

Amy was described as a vivacious, kind, and loving Cree Knowledge Keeper, educator, artist, and entrepreneur. “She shone her light far in the world,” said the Calgary Herald’s obituary for Willier. “A member of Sucker Creek First Nation, she loved living off the land in her traditional ways, hunting and picking medicine, all while sporting her signature bright red lipstick and mischievous grin.”