August 5, 2014 – The Treaty 8 First Nations of Alberta will be erecting signs on the borders of their territory that falls with the province of Alberta that is covered by the 8th numbered Treaty.

Treaty No. 8 was signed with the Federal Government on June 21, 1899 and covers a vast and diverse geographical area that encompasses portions of three provinces and one territory – Northwest Saskatchewan, Northern Alberta, Northeast British Columbia and the Southern Northwest Territories.

The first sign to mark the Treaty 8 territory will be erected near Whitecourt, Alberta. This will create some awareness and serve to educate the general public about this important time in the history of the relationship between First Nations people and Canada. 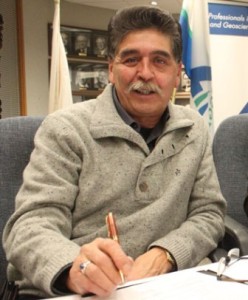 The Grand Chief of the Treaty 8 First Nations of Alberta, Richard Kappo says, “Our relationship with Canada has long been neglected and the real history ignored. This contributes to deep misunderstandings and misconceptions about what the true spirit and intent of Treaty No. 8 is.”

By marking the boundaries of the Treaty 8 territory, the Treaty 8 First Nations of Alberta also put forth an assertion of existence. Says Grand Chief Kappo, “We have existed on these lands, engaging in the ways of life that sustained our ancestors, before the signing of the Treaty.

“These are not only ways of life but expressions of who we still are. As the Cree, Dene, Beaver and Chipewyan people of this area this is a real way to remind industry, governments and Albertans, that the lands they are entering sustain the culture, traditions and roots of many First Nations people.”

The territory of Treaty 8 is home to a vast amount of natural resources whose wealth built the province of Alberta and is an important economic engine to Alberta’s economy.

The Treaty 8 First Nations of Alberta will put up 8 signs along the major highways of all entry/exit points within the province’s boundaries that fall within Treaty 8 territory.

“Putting up these signs is an important exercise in raising awareness of the Treaty relationship but it is also a statement of claim of sorts,” concludes Grand Chief Kappo. ” These territories have sustained our people for centuries and we will ensure that they continue to do so.”

Be the first to comment on "Raising Treaty No. 8 territory signs in Northern Alberta"