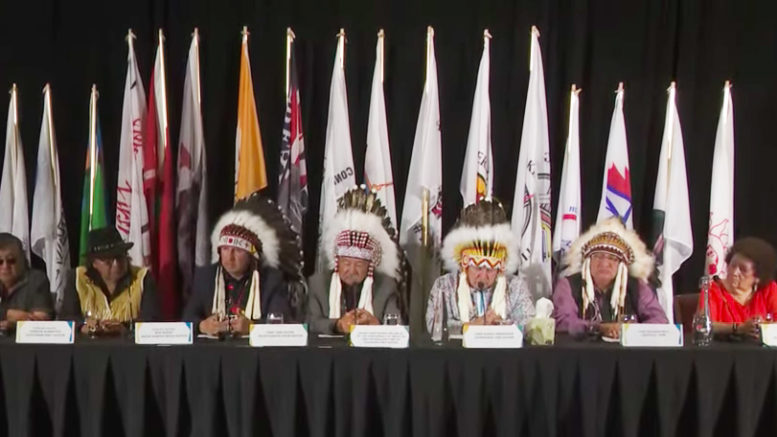 (ANNews) – Indigenous leaders and residential school survivors held a July 21 press conference to emphasize the varied emotions Indigenous people are feeling in advance of the Pope’s historic visit to the Edmonton, Quebec City and Iqaluit regions to apologize for the Church’s role in committing genocide against Indigenous peoples.

“They have been carrying unimaginable trauma for many generations. For many, the acknowledgement of this pain is an important step to reconciliation,” he said, adding that this is just the beginning.

He emphasized the perspectives of survivors should be front and centre during the Pope’s visit.

Chief Bull, whose band is one of the Four Nations of Maskwacis, said he never expected to see the day when the Pope would come to apologize for the harms the Catholic Church did to Indigenous peoples.

“I am a day school survivor and a product of intergenerational trauma. I was robbed of my language. I am now slowly relearning and reclaiming it. I’m grateful to witness an admission of truth so we can reconcile and bring peace to future generations,” Bull said.

He acknowledged “mixed emotions” about the Pope’s visit. “There must be enough mental health support and hotline support for the thousands of people who will be dealing with the aftermath for the weeks, months and years to come,” said Bull. “Our people should also look to ceremonies and medicinals to help heal.”

Chief Ermineskin, who spoke in his nation’s Cree dialect before and after speaking in English, said he understands the “pain and sorrow” many Indigenous people are going through, because he is himself a survivor. “This is a once in a lifetime event for many of us. It’s important that we support each other as we navigate this healing process,” Ermineskin said.

Later in the event, he revealed his brother died by suicide at 17 when he returned from residential school. “He came home but he didn’t come home,” Ermineskin said.

Chief Alexis said that for the many First Nations people who are Catholic, the Papal visit is a triumph while others “are angry and still struggling.”

“True reconciliation is not a photo opportunity. There’s still a great deal of work ahead of us, but it’s a good start,” he said. “There’s hope healing will happen, not just for us [but] for the Church also.”

Rod Alexis, a survivor from Alexis Nakota, said he’s pleased to see the Pope coming to Turtle Island to apologize. His parents were residential school survivors as well.

Alexis, who is a practicing Catholic, said Indigenous people can begin to heal through embracing their own cultural practices.

On his first day of school, Alexis recalled being punished for speaking his own language. “They tried to take that away, but I was stubborn to fight back,” he said. “Today, I’m starting to learn and I’m finding the beauty of what we lost. And that beauty makes me a stronger Christian today, because I understand the Creator.”

Burnstick, a survivor from Alexander, described how he came from a large family with 18 siblings, all of whom survived residential schools for varying amounts of time, adding up to more than 100 years total.

“Sister, I love you but I don’t know you. We grew up at residential school and we never talked,” he recalled one of his brothers saying to one of his sisters at a family gathering in 2007, which made her cry.

“It hit me right here,” Burnstick said, pointing to his heart.

Since that year, Burnstick has worked to provide healthcare to residential school survivors.

Be the first to comment on "Pre-Papal visit panel hears from Indigneous leaders, survivors and Elders"