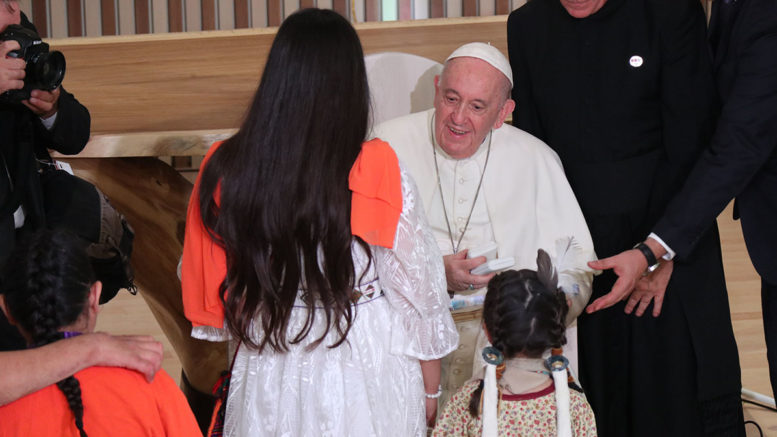 Parishioners present Pope Francis with gifts during his visit to Sacred Heart Church of the First Peoples in Edmonton. (Photo by Paula Kirman).

(ANNews) – Arriving to the sounds of drumming, Pope Francis made his first appearance in Edmonton at Sacred Heart Church of the First Peoples on July 25, to an invitation-only audience of about 250 people.

After words of welcome from Fr. Susai, Bill Perdue and Candida Shepherd shared reflections about the parish community from their perspectives and family connections to residential schools. When the music team sang the traditional hymn “How Great Thou Art” in English and Cree, Pope Francis became noticeably emotional, placing his face in his hands.

Pope Francis was welcomed to the Sacred Heart Church of the First Nations by traditional drumming. (Photo by Paula Kirman).

Speaking in Spanish, with English subtitles on the video screens throughout the sanctuary, Pope Francis addressed the parish community. “In Rome, after I listened to your stories, I stated that ‘any truly effective process of healing requires concrete actions’,” he said, referencing his Address to Representatives Indigenous Peoples in Canada, on April 1, 2022.

“I am pleased to see that in this parish, where people of different communities of the First Nations, the Métis, and the Inuit come together with non-Indigenous people from the local area and many of our immigrant brothers and sisters, this effort has already begun.”

He continued: “I wanted to make this penitential pilgrimage, which I began this morning by recalling the wrong done to the Indigenous peoples by many Christians and by asking with sorrow for forgiveness. It pains me to think that Catholics contributed to policies of assimilation and enfranchisement that inculcated a sense of inferiority, robbing communities and individuals of their cultural and spiritual identity, severing their roots and fostering prejudicial and discriminatory attitudes; and that this was also done in the name of an educational system that was supposedly Christian.” 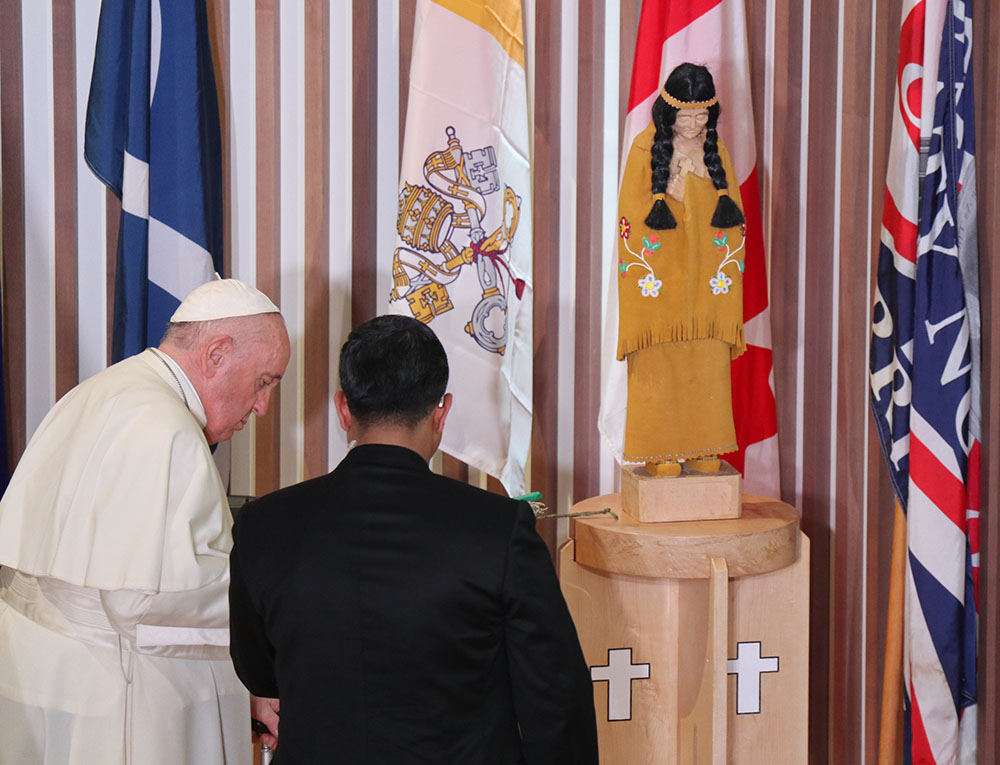 Pope Francis blesses the statue of St. Kateri during his visit to Sacred Heart Church of the First People in Edmonton on July 25. (Photo by Paula Kirman).

Pope Francis went on to speak of reconciliation in a church context. “I can only imagine the effort it must take, for those who have suffered so greatly because of men and women who should have set an example of Christian living, even to think about reconciliation,” he said.

“Nothing can ever take away the violation of dignity, the experience of evil, the betrayal of trust. Or take away our own shame, as believers. Yet we need to set out anew, and Jesus does not offer us nice words and good intentions, but the cross: the scandalous love that allows his hands and feet to be pierced by nails, and his head to be crowned with thorns. This is the way forward: to look together to Christ, to love betrayed and crucified for our sake; to look to Christ, crucified in the many students of the residential schools.”

Following his address, groups representing different  of the parish presented Pope Francis with gifts, including Indigenous paintings and prints, rawhide gloves and moccasins, an eagle feather, and a blanket. The groups included youth, a family of three generations, First Nations and Métis Elders, and a second group of both Indigenous and non-Indigenous Elders of the parish.

Pope Francis’ final act in the church was to bless the statue of St. Kateri Tekakwitha, the first Indigenous person to be canonized as a saint in the Roman Catholic tradition. The handcrafted statue was created to be a testament to St. Kateri’s Indigenous culture and Catholic faith, including handmade, traditional clothing made from animal hide and decorated with beadwork.

After exiting the church, around 100 people stood behind the gated perimeter cheering, waving, and hoping to get a glimpse of Pope Francis, who did a quick lap of the area before getting back into the Popemobile and heading off for the evening.

Sacred Heart Church is the only designated Indigenous Catholic church in Canada. The name of the church became Sacred Heart Church of the First Peoples on October 27, 1991, when Archbishop Joseph MacNeil declared it Edmonton’s First Nations, Métis, and Inuit parish. The church is located in the northeast Edmonton neighbourhood of McCauley, where there is a large urban Indigenous population.