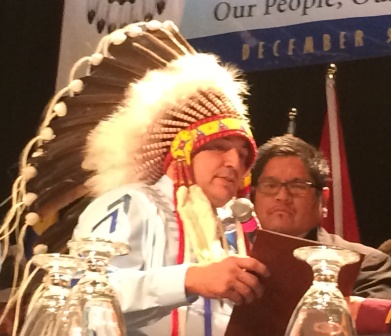 Perry Bellegarde, elected  on December 10, 2014 as National Chief of the Assembly of First Nations (AFN), reinforced his commitment to being a catalyst for positive change for First Nations people across Canada.

“First and foremost, I want to express my sincere gratitude to Chiefs from across the country for the trust they have placed in me to lead the Assembly of First Nations in its work to improve the day-to-day lives of First Nations people, in their homes, at their jobs and with their families. I am honoured to accept this responsibility.”

The issues on which National Chief Bellegarde will focus are those on which his campaign centered. Said Chief Bellegarde, “First Nations self-determination must be achieved. Implementation of Treaty Rights and Aboriginal Title, which includes resource revenue sharing and adherence to the duty to consult and accommodate, are central to that. We must establish a new fiscal relationship with the Crown. An immediate action plan and inquiry into Missing and Murdered Indigenous Women and Girls is imperative. And a committed focus on the revitalization and retention of indigenous languages is essential.”

“A strong and united AFN will be pivotal to our success in achieving our goals and it is clear that AFN must be relevant, responsive and respectful. While there has been much discussion about division and differences of opinion, my travels across the country where I met with thousands of First Nations leaders and First Nations people, have served to remind me that on these key issues, there is overwhelming agreement. It will be our job, as AFN leadership, to convert that level of agreement into an action agenda that addresses the unacceptable gap between First Nations people and non-First Nations people in Canada. I am committed to using my leadership experience, combined with a relentless focus, to deliver concrete results.”