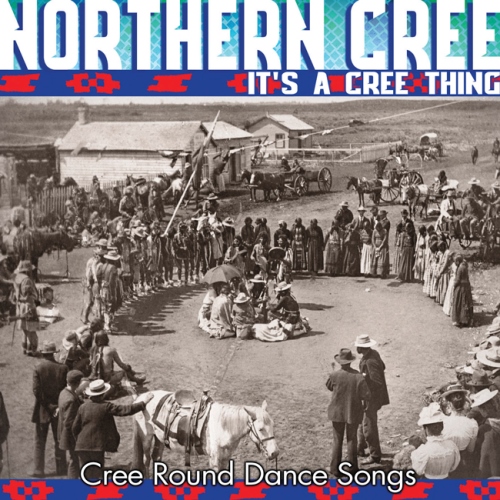 (ANNews) – Later this week the Northern Cree Singers will find out if seven is their lucky number. That’s because on February 12, 2017 the popular Alberta-based Canadian band, who received their seventh Grammy nomination last fall, will know whether or not their newest album, “It’s a Cree Thing,” released in 2016, has been selected as the winner in the 59th Annual Grammy Awards’ ‘Best Regional Music Album’ category.

The popular album, which is available from iTunes for just $9.99, has 11 great powwow tunes on board and is just one of many albums that the band has released since the turn of the century. After listening and purchasing this album, I’d say it’s one of their best yet. Tunes that include Watch Your Wives, Indian Summer, Hearts and Arrows and Oh, That Smile are among my all-time favourites and if you check out the album I’m sure you’ll agree. Recorded and produced by Canyon Records, “It’s A Cree Thing” is available for free listening on a number of popular music sites, including iTunes, Napster and Spotify. 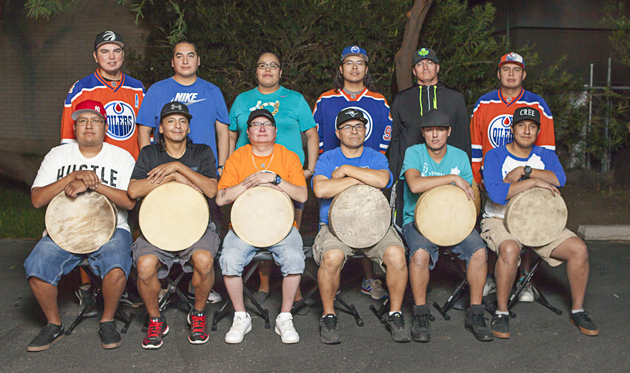 The Alberta-based music group Northern Cree Singers have been nominated for their seventh Grammy Award, this year in the ‘Best Regional Music Album’ category for their new release – “It’s a Cree Thing.”

It’s no surprise that the Northern Cree Singers are considered one of the best, if not the best Round Dance-themed drummers and singers troupe in the business today. Over the years this group’s music has spread its beautiful sounds, stories, songs and dance across North America and beyond. The foot-tapping, head-nodding beats not only reflect the vibrancy of the Round Dance, but also bring a special feeling and a kind of peace that offers a magical blend of both meditating and healing powers.

The last time I saw the group play was in the summer of 2015 when they joined the likes of Nathan Cunningham, Derek Miller, Murray Porter and Crystal Shawanda on the stage during National Aboriginal Day celebrations in Edmonton’s Louise McKinney Riverfront Park.

Group leader Steve Wood, who also teaches high school in Maskwacis, is originally from the Saddle Lake First Nation. The group has won numerous awards and many accolades over the years and have been chosen as multi-award winners during the prestigious annual Canadian Aboriginal Music Awards galas over the years.

The Northern Cree Singers have been around since 1980 when the Wood brothers made a trip to Idaho to compete in a stick game tournament. There’s a lot of stories about how the group started, and since I tried but can’t reach them in time for deadline I’ll share my favourite version.

“The first day they got there,” or so the story goes, “they lost their money and didn’t have enough to get home. The only way they could get the money was to earn it – so they did, by singing for their supper. The brothers borrowed a drum from a local museum and when they went to sign in at the arena where they were going to perform, the director asked them the name of the group. Looking down on top of the drum, they could read the faded words, Northern Cree. Thus the name was born.”

Today the group is respected, influential and has a huge following, especially in North America and Europe. The troupe size ranges in numbers from 12 to 15, sometimes even more. If you have about eight and a half minutes to spare, and haven’t already seen it, be sure to check out their outstanding and beautifully choreographed music video, You Driving Me Crazy, a youTube sensation first uploaded in November of 2009. This particular video alone has been watched more than a half million times.

In a recent interview with the CBC Wood said that he was surprised to learn that the group’s ‘It’s a Cree Thing’ album had been nominated for a Grammy. The Native American music category has been dropped from the list of Grammy categories; to that Wood noted: “To be honest, I didn’t think we’d be nominated again in this lifetime.”

This latest nomination proves yet again just how powerful Indigenous music has become over the years as more and more music lovers tune into the powerful and hypnotic beat of the drum and the powwow singer. This year they are competing against groups that have a totally different sound including non-Indigenous music from: Roddie Romero and the Hub City All-Stars, Kalani Pe’a and Barry Jean Ancelet and Sam Broussard.

In his interview with CBC’s Travis McEwan in early December 2016 Wood said he’s hoping that the music catches on outside the Aboriginal communities because he wants to share his music and his culture with everyone. He also noted that some people still say the group should only be sharing their traditional drum music with people of their own culture.

“We need positive stories for our young people so that they know that they can aspire to great things and they don’t have to be anybody else. They can be themselves,” he said.

“(Our music) is meant for everyone,” he added, noting that “when I see in the U.S. in some schools where non-Native kids are taking up drumming, I think that’s awesome. Why not? It’s our music but we’re sharing it.”