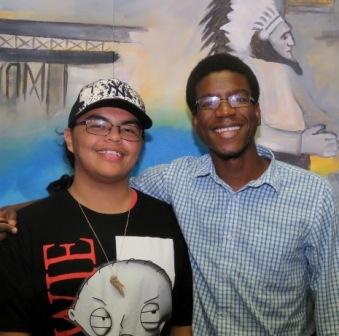 – The crowd was gathering, local musicians Dana Wylie and Kirsten Elliot were playing soft and beautiful background music and lunch was just being served. David Shepherd, the newly elected MLA for Edmonton-Centre was standing in front shaking hands and smiling at everybody as he was about to participate in the unveiling of a new community mural. That mural, an eleven foot by nine foot canvas, was commissioned by the iHuman Youth Society and was created by First Nation artist Matthew Cardinal and his mentor, Emmanuel Osahor (pictured here).

It was early Sunday afternoon, September 13 and the Edmonton-Centre constituency office, located at 10208-112 Street, was filled with community members who came to the Open House  to meet the new MLA and wish him well, and be among the first to see the new painting. Constituency Assistant Claire MacDonald was meeting and greeting, making introductions and directing guests to a table filled with a variety of interesting and tasty Moroccan dishes prepared by local chef, Rachid El Kafi. 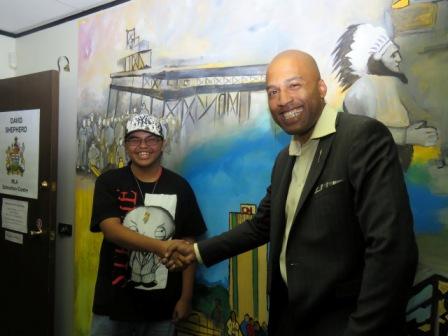 After a brief introduction to both MacDonald and Shepherd, I sought out the artist for a sneak peak at his new creation. Artist Matthew Cardinal wouldn’t have any part of that but the talented 20 year old did agree to a short interview. Cardinal hails from John D’Or Prairie but moved to Edmonton at an early age. He said he creates art to inspire others and as a relaxant that helps him deal with stressful issues in his own life. He works with aerosol, acrylics and ink and is also a poet and lyricist and loves working with music. He aspires to become better known in the community and wants to continue with his studies; he’s about to enrol at Norquest College.

“When people see this painting I want them to feel proud, proud of who they are and proud of where they live,” he said. “Catherine at iHuman brought my attention to this opportunity and it’s been a good one for me. The idea was to create an image that showed something of the history in downtown Edmonton, something that would reflect what it means to live here and also to give people a glimpse of Edmonton’s history.” 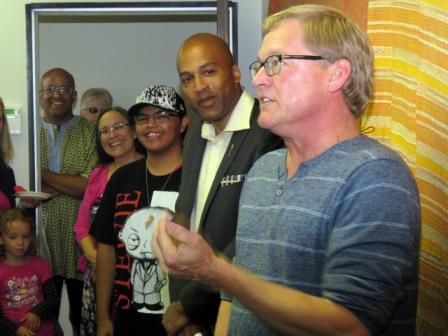 Minister of Education and Minister of Culture David Eggen joined MLA Shepherd and artist Matthew Cardinal at the Open House.

The canvas comprises four different sections or themes, each blending into the other to create a menagerie of colour and historical relevance. One area of the painting depicts the signing of Treaty 6 in the late summer of 1876; another shows the High Level Bridge under construction in 1912, the year that Edmonton and Strathcona became a single city.

The construction of the world renowned MacDonald Hotel is another area captured on Cardinal’s painting.

“This a powerful piece of the painting,” emphasized the artist, “because it remembers the many African people who came here to build it. I understand that some of their descendants still live here in the city.” 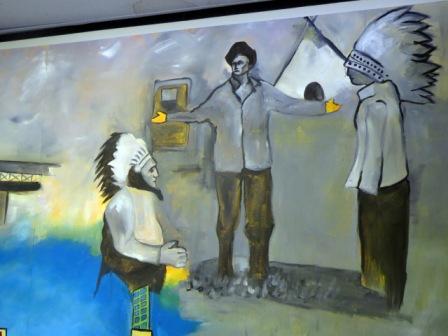 Signing of Treaty 6 is featured in the new mural.

The final piece of memorabilia shows Edmonton today, the vibrancy of inner-city life, and the communities and businesses working to bring new energy to Edmonton’s core.

“This is the biggest and most important piece of art I’ve ever done,” explained Cardinal. “It took about seven days to complete the work, but it might have taken much longer had it not been for E-man; he mentored me throughout the project and he pushed me when it was time to get the work done.” 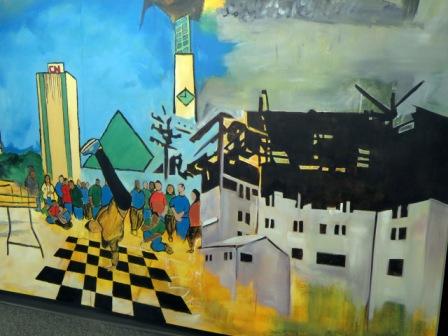 “Yes,” smiled Osahor, who’d been working as a volunteer at iHuman for about three years before being hired on as the society’s art director. “We did have a good time with it. Matthew had some ideas of what he wanted to create and we worked together and studied the history of the area and looked for pictures that describe the growth in the region There was a fair amount of research but Matthew did a great job and I think this piece of art will stand for years to come.” 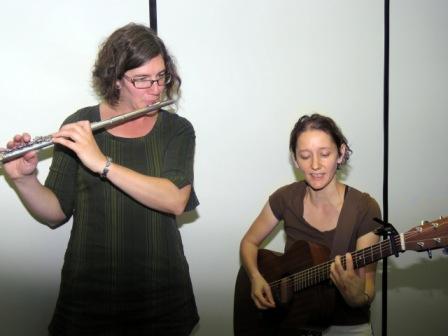 Osahor, also a painter and a graduate of the University of Alberta’s Fine Arts Program, has his own downtown studio in Blue Sky’s, where he shares space with five other artists. He accepts commissions and can be contacted via his website at: www.eosahorart.com

Minister of Education and Minister of Culture, David Eggen opened the afternoon, joked about how he’d tried to win in the riding in 2001 and said that he’d cautioned Shepherd that it usually took two go-arounds to even have a chance at being elected. 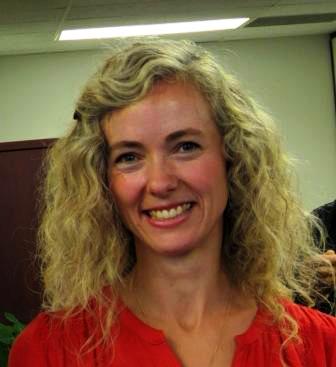 “Not so, as it turned out,” he said. “David won his very first election. This is an auspicious time for all of us here in Edmonton-Centre. It’s very exciting to be here today. I can’t tell you how proud I am of David Shepherd’s victory, but even more important what he’s already done for his community, the Legislature and the people of Alberta. With two ministries, I need some help at times and David has filled that role and attended numerous cultural events at my bequest. He’s a good man and great leader.”

“I am so thrilled to see so many of you here today, members of the community coming to help break in the new office,”  said Shepherd, in his opening remarks. “This building belongs to you, the people of Edmonton and Edmonton-Centre and I hope to see you here often; you are always welcome.” 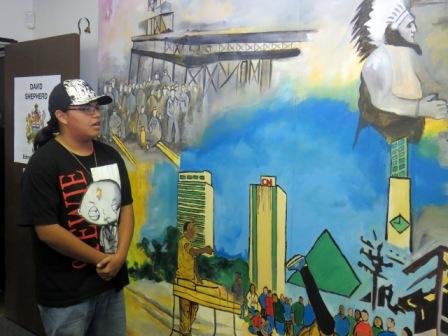 Introducing MacDonald and constituency caseworker Patricia Vanier, Shepherd explained that “one of our roles is to help out the folks in our constituency and certainly here in Edmonton Centre we have many people who need assistance with various aspects of government and other areas of life. If you or anyone you know needs help please contact our office and talk to Patricia.”

Shepherd, a graduate of Grant MacEwan’s music program, is a pop musician with an outstanding voice and proficiency with the piano, organ, accordion and the Rhodes electric piano. He offered interested listeners a free copy of his CD: Gotta Leave From Where You’re From, a 12-cut section of soothing and relaxing yet upbeat tunes perfect for that quiet moment on the couch.

Todays cultural diversity is among the highlights in Cardinal’s creation

“Art is something that is important to me and I believe it is important to the people here in Edmonton-Centre as well. We have so many great facilities here in Edmonton; we have the Art Gallery of Alberta, the Citadel Theatre, Latitude 53, the Winspear, the Jubilee and many smaller arts and theatre venues. These are all places that make our city a much richer and exciting place to live.

“As Albertans, as Edmontonians, as people that live on this land we have a deep, rich history with First Nations as we stand here on Treaty 6 land remembering their contributions and the work they’ve done. As part of this office and in recognition that this property belongs to the people of Alberta, we thought it would be a fantastic thing to commission a work of art that reflects the history of this place, the people who live here now and the idea of our community going forward in the future.”