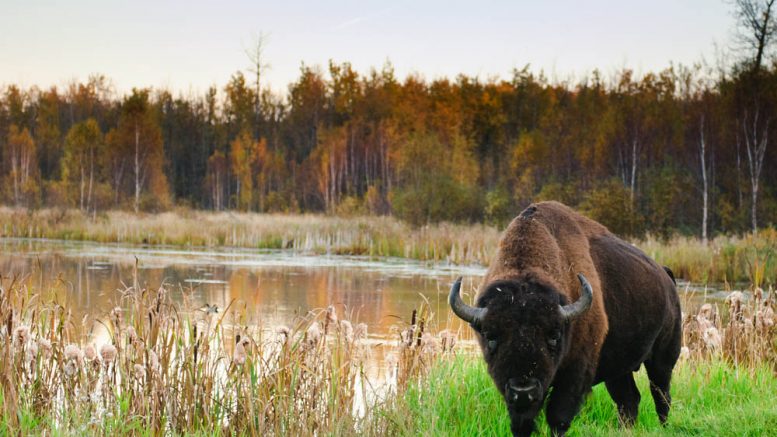 As a recognized leader in conservation, Parks Canada has made lasting contributions to wildlife conservation for over a century, including the recovery of species at risk such as the wood bison.

In a new initiative, 14 wood bison from Elk Island National Park will be translocated to the Woodland Cree First Nation in Alberta to establish a new herd. By transferring bison to establish conservation herds across North America, the Government of Canada is contributing to the restoration and long-term survival of wood bison.

“The Government of Canada is pleased to be collaborating with the Woodland Cree First Nation in Alberta on bison conservation,” stated Jonathan Wilkinson, Minister of Environment and Climate Change and Minister responsible for Parks Canada.

“The survival of bison from near-extinction is one of Canada’s conservation success stories, which has established populations of plains and wood bison across North America.

“This conservation initiative is an important step in ensuring bison continue to thrive for generations to come and helps strengthen Indigenous peoples’ connections to their history and traditions.”

Bison play a key role in their ecosystems and also have great historical, cultural and spiritual significance to Indigenous peoples of the Great Plains. Parks Canada is committed to helping Indigenous peoples re-establish connections to traditional lands and waters and significant aspects of their cultures.

“Myself and others (in our community) have also found buffalo skulls; so the Buffalo are a part of our identity that has been missing.

“To have buffalo in our area again will develop our own cultural identify back, build purpose into the community, and rejuvenate the ecosystem by bringing back more diversity to the environment. The bison will be a holistic part of our community, part of our environment, our food and our ceremony.”

Supporting the relocation of bison has been an important part of Elk Island National Park’s mission for more than a century. Both the wood and plains bison herds from the park have supplied bison to national and international conservation projects. Over the past century, Elk Island has translocated nearly 3000 plains and wood bison to various partners in bison conservation, including several Indigenous groups.