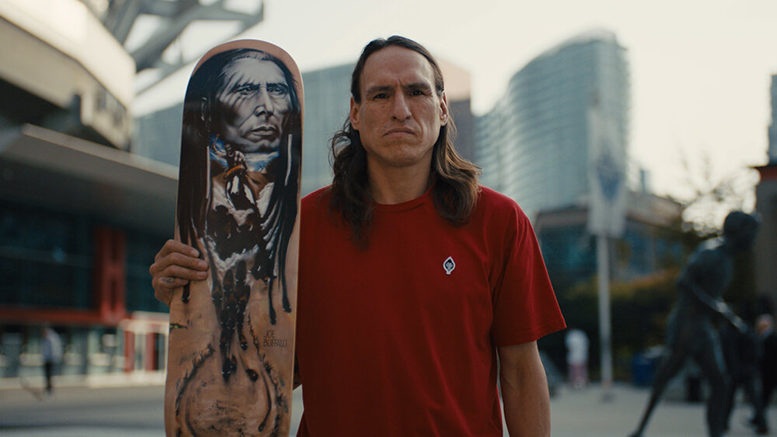 Joe Buffalo with his skateboard (Still from the film "Joe Buffalo")

(ANNews) – Joe Buffalo is a professional skateboarder from Maskwacis Cree Nation and the star of a new short documentary by Syrian-Canadian filmmaker, Amar Chebib.

The film, titled Joe Buffalo, chronicles the life of Buffalo and his turbulent come-up.

“I was raised traditionally through ceremony and speaking my language, but when I was 11 years old I was taken off reserve and forced into residential school,” said Buffalo in the film’s trailer. “Who are you supposed to run to? When you say, ‘Mom? Dad?’ Who’s going to come and protect you from these people?”

“For me, skateboarding was definitely a saviour.”

The film premiered at the Big Sky Documentary Film Festival in February. It also won the Audience Award at South by Southwest (SXSW).

Director, Amar Chebib, said of working with Buffalo, “I was sort of blown away by just by how much he has had to overcome to get where he is.”

Because the film is about skateboarding, Chebib believes that it will raise residential school awareness in people who haven’t been fully exposed and educated on the matter.

“Many people are familiar with that legacy but they didn’t know that the last school didn’t close until the nineties,” he said.

For Albertans interested in viewing the film, it will be screened at the upcoming Calgary Underground Film Festival and Edmonton’s NorthwestFest Documentary Film Festival.