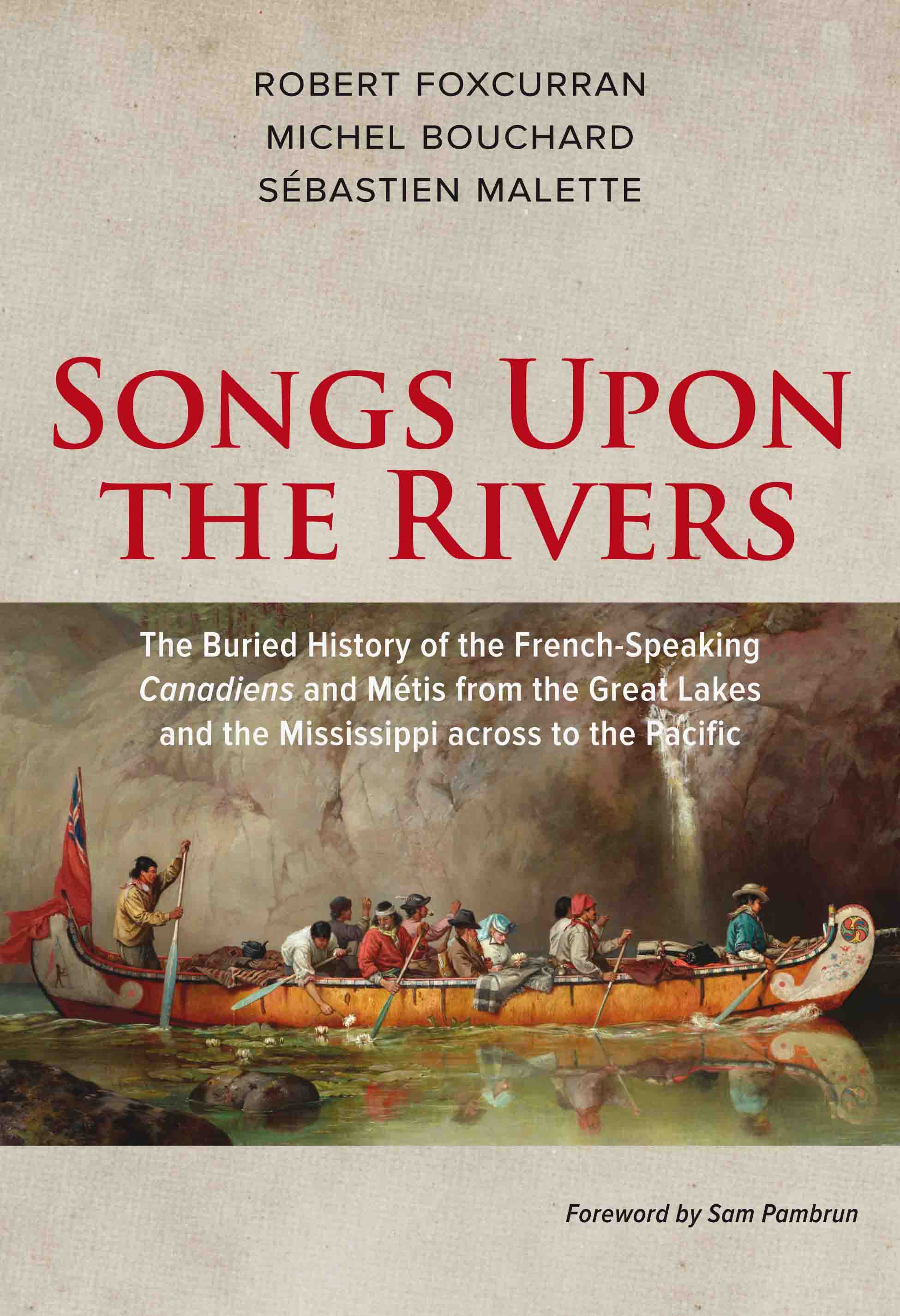 (ANNews) – An increasing number of universities and colleges across North America are offering Indigenous Studies programs and some have mandated that undergraduate students complete at least one course for their academic programs.  The philosophy behind the implementation of the requirement seeks to educate tomorrow’s professionals and academics about a dark history of which many Canadians remain unaware.  With such trends seeking to reconcile Canadians with a jaded past, there arises a greater need for contemporary scholarship addressing this period of our history with candour and reflective honesty.

On February 25th Audrey’s Books, a long-time Edmonton staple, welcomed author Michel Bouchard, a noted scholar and University of Alberta graduate.  Bouchard’s recent publication, Songs Upon the Rivers: The Buried History of French-Speaking Canadiens and Métis from the Great Lakes and the Mississippi Across to the Pacific, written in collaboration with Robert Foxcurran and Sébastien Malette, has begun an important and highly relevant public dialog surrounding the history of Canadian colonialism and early identity building.

“Nations are created through the burial of inconvenient history,” the first line of the book’s introduction reads.  Bouchard, the Chair of Anthropology at the University of Northern British Columbia, pioneered this project in order to address problematic gaps in the widely-accepted narrative of our Canadian path to nationhood.  Bouchard commented that “It was the challenge we faced: writing a book for Americans who didn’t know Canadian history, and Canadians who didn’t know as much as they thought about American history.”

An eclectic assembly of academics, history-buffs and interested community members gathered on the cosy lower level of Audrey’s Books to hear Bouchard discuss his publication which recently ranked #4 on Edmonton’s non-fiction bestseller list. 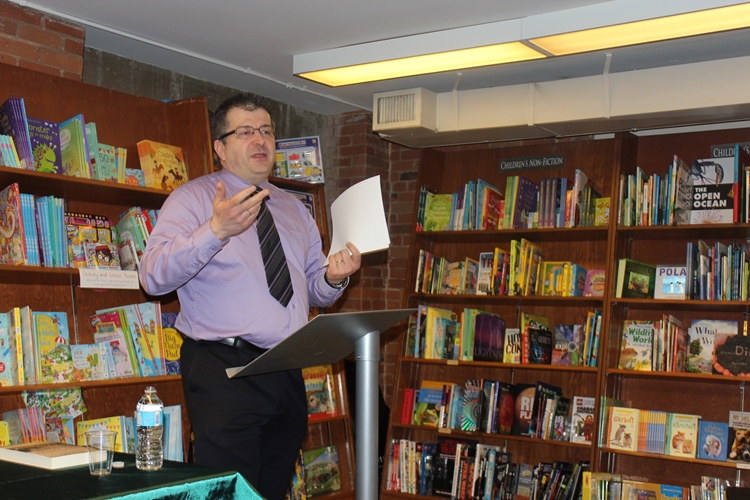 UNBC Professor and co-author Michel Bouchard explained some of the challenges and the importance of documenting the untold history of Canada during the Edmonton book launch for “Songs Upon the Rivers.”

“Who is familiar with Sacagawea?” posed Bouchard, whose question was met with a chorus of affirmative mumbles.  “Well, does anybody know what her son’s name was?” This time uncertain heads turned to scan the crowd for more knowledgeable attendees – there were none.

“His name was Jean-Baptiste Charbonneau,” explained Bouchard, “he was Métis and his father was French-Canadian.”  Instinctively Bouchard’s listeners snapped to attention with curiosity realizing that as Canadians such information should have been at least vaguely familiar.  But how could it, when our nationally accepted historical narrative relegates this piece of our past to the periphery of what we are taught and exposed to: “[t]he dominant narrative of Métis nationalism tends to produce an overly simplistic, linear and evolutionary model of Métis nationhood” (381).

Songs Upon the Rivers is a successful attempt at reconciling dominant and progressive cultural narratives through an unapologetic examination of merged First Nations and colonial identities.

“Songs Upon the Rivers challenges both American and Canadian national narratives, highlighting how the history of French-speaking Canadien, Iroquois, Métis and others was buried and forgotten,” commented Bouchard in an interview when asked about the main objectives of the book.  “It also seeks to challenge the dominant explanatory models of Métis ethnogenesis, proposing a theoretical framework whereby the Métis identity emerged continentally with multiple loci of identity and belonging.”

How a society defines ‘identity’ ultimately dictates how history will be recorded. “While Anglo-Americans came to embrace ideals of racial ‘purity,’ the Canadien would see nationality as a cultural choice, a conscious decision to become and remain Canadien” (23).  For example, long enduring identity subjugation of Métis is unequivocally rejected by the authors.  “The distinction between ‘M’ and ‘m’ Métis to denote the difference between what would be the descendants of a people endowed by a ‘collective consciousness’ versus what would be the descendants of a lower form of immature ‘métis’ communities, here reduced to the accidental and unaware status of being ‘merely mixed’ is unacceptable” (58).

In an age where questions of ‘identity’ emerge as dominant themes in popular media (TV, movies, literary fiction), many Canadians are left to ponder about their own conceptualization of identity.  Who are we as ‘Canadians’?  In many ways, Songs Upon the Rivers is an historically based answer to this very question.  “Much like an archaeological excavation where disparate artefacts are pieced together, the documents left behind when the historical record is exhumed testify to a common continental story” (388).  This collaborative effort explores the many cultural contributions that define who we are as Canadians, effectively giving voice to a long-silenced past.

According to a January 26, 2017 review posted by Octopus Books, “The history of exploration in North America is a tapestry of cultural interactions. The children of Indigenous communities and European settlers eventually established an identity distinct from their ancestors.  Songs Upon the Rivers collects information from primary sources and long-lost documents to map the distinct identity of French-Canadiens and Métis.”

The book, recently published by Baraka Books, boasts a rich array of unearthed photographs and archived maps giving the reader a vivid visual perspective of the history unfolding on the page.  Even for those who are not immediately excited by a detailed academic read, Songs Upon the Rivers is a worthwhile investment, even if only for its insightful documentary research and in depth visual historical chronicling alone.  “The research and organisation of the information in this book are the work of a lifetime for all three authors,” observed publisher Robin Philpot of Baraka Books.

After a lively question and answer session, Songs Upon the Rivers quickly disappeared from the shelves at Audrey’s Books purchased by patrons from all walks of life.  With newly signed copies bundled under layers of protective winter armour audience members began to file out of Audrey’s and onto the snow covered downtown streets of Edmonton chatting animatedly exploring their own newly forming revelations.

While an increasing number of university and college students enrol in mandatory and optional Indigenous Studies courses, Songs Upon the Rivers continues to break through the barriers of sugar-coated and watered-down standard depictions of early Canadian history ensuring that even the most sinister stories of our past will finally be told.  With each copy that is sold readers are rejecting the rosy veneer of revisionism and demanding factual honesty as the basis of Canada’s national identity.

Songs Upon the Rivers: The Buried History of French-Speaking Canadiens and Metis from the Great Lakes and the Mississippi across to the Pacific by Robert Foxcurran, Michel Bouchard and Sébastien Mallete. Published by Baraka Books, ISBN: 978-1-77186-081-9