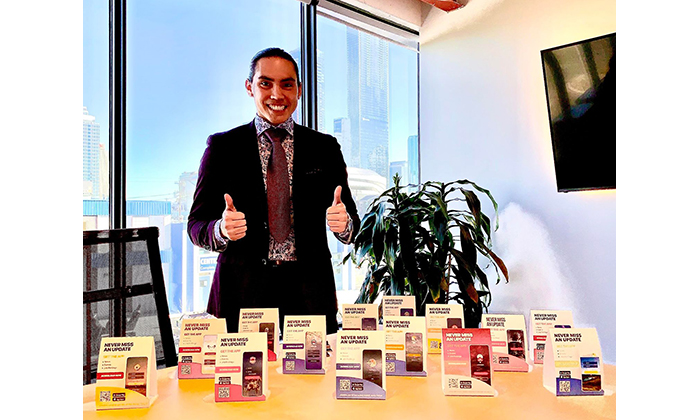 (ANNews) – An Alberta-based tech company aims to revolutionize how First Nation bands communicate with their membership. The company – AIVIA – has developed an App tailored for the specific needs of Indigenous communities.

The need for the App was brought to AIVIA’s attention by the Driftpile Cree Nation, explained co-owner Shawn Bannerman. “They mentioned they had a problem communicating with off-reserve members,” and they asked if the company could come up with something to address this.

Bannerman said that something as simple as a change of address form can be difficult for a First Nation community. Sending documents to band members can be cumbersome for a First Nation Administration when half their membership lives across the country.

He said that First Nation communities traditionally have low attendance for on-reserve programming and there are issues stemming from lack of communication on band services being offered.

“The App provides a single channel to all of their members,” said Bannerman. “Just download the free App; the administration runs it.”

He explained that the App allows First Nation tribal governments, band departments, and leadership to send band updates or documents to band members by notifications through the App – regardless of whether they are checking social media or not.

Bannerman explained the problem with social media like Facebook is that band members who are part of a Facebook group or page, don’t necessarily get push notifications as they would with an App.

He noted that Indigenous communities are the youngest and fastest-growing population in Canada and are tech-savvy. The App is the most effective way to communicate with this population that largely lives off reserve, added Bannerman.

He also explained that all data collected by the App is owned solely by the client – the Nation in this case. He said as a third-party entity AIVIA doesn’t have access to any of the data or personal information collected from the usage of the App.

Darrell Brertton is AIVIA’s first and only Indigenous employee. He was born and raised in Edmonton and has membership with Saddle Lake Cree Nation.  He is also a prominent Cree powwow dancer from Edmonton and performed recently at Rogers Place at an Edmonton Oilers game.

The young father is a consultant and sale rep with AIVIA; the company plans to hire more Indigenous representatives as they expand.

Part of Bretton’s role at the company is to inform AIVIA on Indigenous protocols and offer advice on how to build rapport with Indigenous communities.

Brertton said the App can track messages and notifications being sent and received by smartphones(device ID). According to Brertton, if a First Nation community sends an update through the App about a band activity, a youth camp or Covid -19 update for example, they will receive that update through a notification sent to the App. The administration can see in real-time if a band member gets an App notification or not.

Since the onset of the COVID-19, distanced communications have become increasingly vital, especially for communities with specialized communications needs. The App is making a real difference in people’s lives by allowing for rapid distribution of information to anyone with a smartphone.

To date the group has gained twenty-eight First Nation communities as clients.