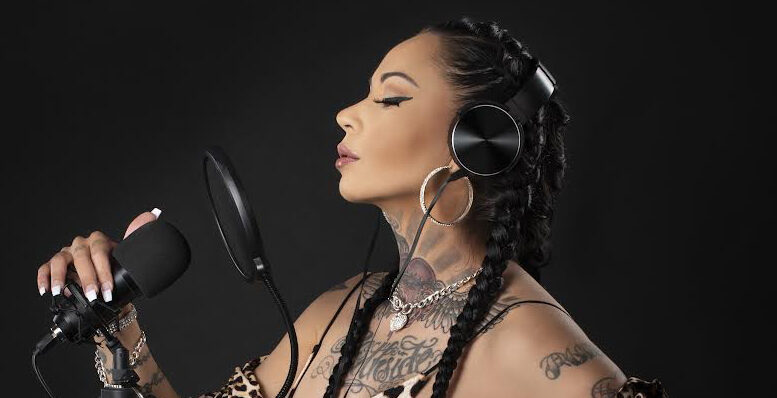 (ANNews) – All across Turtle Island, there are many Indigenous artists creating beautiful music that reflects their experiences and beautiful spirits. One of those artists is Roni Gauthier aka Pooky G. She currently lives in Edmonton, and her EP album So Far So Hood recently won the award for Hip Hop Album of the Year at the 2022 International Indigenous Hip Hop Awards.

In an interview with Alberta Native News, Pooky G spoke about her inspirations, music and several of her other non-musical projects.

Born and raised in Edmonton, she fell in love with music at a very young age. At around 12 or 13, Pooky G was always in her room listening to instrumentals, writing her own music, recording and dreaming about the life that she is living now. Her dad was an emcee and he introduced her to hip-hop and also helped inspire her in her musical journey. She has many inspirations for music, but what usually inspires her to make music is her own life experiences.

“Usually my inspiration is true events that happened in my life,” said Pooky G. “I use music as therapy, so I get it out in journaling, poem form. But music is my forte.”

Another factor that motivates Pooky G to keep creating music is the fact that she can provide a voice about issues that a lot of people deal with. Knowing that she inspires others also keeps her motivated and inspired.

“My motivation is knowing that I can use music as an outlook for healing and getting out a lot of stuff that needs to be said and a lot of issues that people deal with and don’t speak about,” Pooky G said. “So it gives them something to relate to; inspiring others keeps me motivated and inspired as well.”

For the process of making her award winning So Far So Hood EP, Pooky G said that when she was making songs she thought she might as well make an EP and see where she could go with that and put it on platforms. Additionally, her friends helped influence the EP’s creation.

“A lot of my friends kept asking for more and more music, so that helped to inspire and motivate me to make the EP album,” she explained.

The 2022 Indigenous International Hip Hop Awards Show took place in Winnipeg, Manitoba. The event was both live and virtual. Pooky G flew to Winnipeg to perform at the event. She had been nominated for several different categories apart from the category that she won. She said: “ I flew out to Winnipeg thinking: Okay, I’m nominated. I’ve been nominated before for different things and acting. And I thought just being nominated, I’ll take it as a win. But I did promise them a performance. So in my mind I was set to go perform. When they called my name for the award, I was super stoked and surprised. I was very much in shock.”

Pooky G is currently working on a new album. She said that she’s been doing lots of collaborations this year and has been setting aside new tracks to put on her new album. She feels like the award she received for her EP is confirmation for her that she is where she needs to be on her path of life with music.

In addition to her work and art as a musical artist, Pooky G has many other pursuits in life. She is an actress and acted in a major lead role for the movie Abducted, which was directed by Daniel Foreman and follows the story of an Indigenous teenager searching for his missing sister. Pooky G played the role of Lisa Cardinal.

Pooky G also models and was recently featured in a Paris based magazine called Moevir. “I scored a ten-page spread in there,” said Pooky. “And it just kind of gave a bio of me as a musician [and of some of the other things I do such as modelling and acting] and some of my pictures were featured from a photographer named Lane Jensen.”

On top of modelling, acting and deejaying Pooky G is also an Aboriginal family needs support worker and a workshop facilitator for Going M.I.L.E.S. –  a program that aims to empower Indigenous youth through various workshops.

Pooky G said her workshops are focused on empowerment through music. “I just teach people that you can heal through music,” she noted.

When asked if she had any words of advice for other Indigenous artists who may wish to make music, Pooky G said: “I say: make music. Don’t ever double guess yourself, because as artists we are our own worst critics. But, when we make stuff and art through music without having to re-analyze it and [without having to] keep going over it, some of the best music is created that way.”

She also said that artists should never give up and she re-emphasized the importance of never double guessing yourself. Pooky G finished her words of advice with words of encouragement.

“Definitely go for it. Keep going. Don’t stop for nobody. Let nothing stand in your way. And dreams can be lived for sure.”

So Far So Hood can be found on various platforms such as Spotify, Apple Music and iTunes.