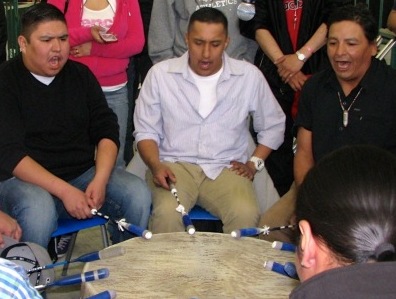 Summer is almost upon us and with it comes the rodeo and powwow circuits, two integral parts of First Nations culture and tradition. The recent Ben Calf Robe Powwow, which took place in Edmonton, was the first and one of the largest of many that will follow throughout the summer of 2014. More than 18 Drum Groups participated at this year’s annual event as dancers strutted their stuff before an estimated crowd of 2,000 spectators, visitors, dignitaries and powwow participants.

“This year’s event is awesome,” beamed Cameron Francis, leader of the Sunchild First Nation-based Drum Group, Rock Creek, one of the many different groups who performed during the day-long Ben Calf Robe event. “Wow, it’s an electric atmosphere in here today; I’m very impressed with the number of drums and with the overall crowd in general. This is a spectacular undertaking and one that I wouldn’t want to miss.” 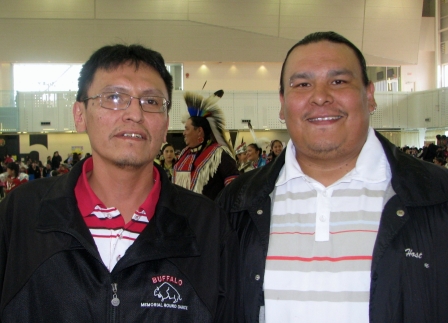 To fully understand what an “electric atmosphere” and impressive music really is, you just have to listen to the tunes on Rock Creek’s latest CD, Ahh Nukka Cha, a delightful undertaking that comprises a dozen different songs, including the title song.

“Yes,” noted Francis, “Ahh Nukka Cha is not just the highlight of this CD but it is also the Number One song on the 2014 Round Dance Trail. We are very excited about that; it is nice when everyone appreciates the efforts you and your drum group go to in an effort to share our stories through song.”

“Each of the songs is symbolic of an event, an undertaking, a vision or an experience,” noted Francis. “We attempt to tell our stories through song, with the music of the beating drum adding emphasis and meaning to the messages we deliver.”

Rock Creek was first launched on the Nekaneet First Nation, located south west of Maple Creek Saskatchewan. The name was the brainchild of the brothers Kurt and Cameron Francis.

The name of Rock Creek, explained Cameron, “was chosen as a gesture of respect to honour our parents, the late Frank Francis and our mother Agnes Francis, who was a member of the Sunchild First Nation near Rocky Mountain House.” 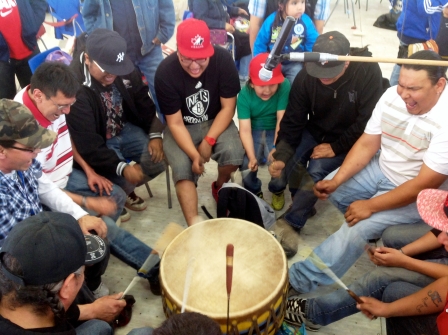 The Drum Group was initiated by brothers Kurt, Cameron, Bill, and John.

“Though we have had a few changes in members of the group over the years, today’s Drum Group consists of family and friends that we’ve made throughout the Powwow Trail.”

There may be many drums at a powwow, especially weekend or week long ones, but each powwow features a host drum which is accorded great respect and the most authority. The members of drum groups typically include family, extended family and friends. Powwow groups are often named for families, geographic locations and tribal societies. Many groups display their names on jackets, caps, vehicles, and chairs. Traditionally it was just the men who would perform on the drum, while the women would sit close by and sing the higher harmonies, but that changed somewhat in the mid-1970s as women began to play different roles, including as singers and drummers.

“Depending on where you come from and depending on the visions or stories you want to share,” explained Francis, “powwow music changes its beat and its meanings. For instance there are various types of songs and each has its own particular style, but the idea is always the same, to get people dancing and expressing themselves and their appreciation for the music and the meanings behind the songs. There are, to name just a few, tribal and intertribal songs, peyote songs, flute songs, ceremonial songs, songs of worship, songs about the Creator, songs about family life and songs about love.”

In most cases the vocals presented in intertribal songs are neither words nor lyrics, but instead a series for syllables called ‘vocables’ that have no actual translation with grammatical meanings.

“To the unfamiliar listener Indian singing sounds exotic, different, and difficult to comprehend,” noted well known and respected teacher, dancer, combat veteran and keynote speaker, Boye Ladd, a member of America’s Ho Chunk and Zuni Nations. As an educator who uses dance, storytelling and sharing his personal experiences to teach others about Native American culture, Boye Ladd also teaches powwow dancing as a way to maintain his commitment of strengthening and supporting the unique spirit and identity that each dancer brings to the powwow music scene.

To the trained ear, however, notes Ladd, “melodies flow, ascend and descend” while dancers react to changes in the structure of the melody and the song. If you give me a stink song, I’ll dance stink. If you give me good music, I’ll give you a great show,” he noted, implying that one can appreciate the music through the dancing, which is readily appreciated by everyone.

Appreciation is always sought, no matter the type of song or the singer performing it. If you are looking for some good music to accompany you on your journey throughout this year’s powwow season, check out the music of the Sunchild First Nation’s star drum group, Rock Creek.

For more information or to order your Rock Creek CD, call Cameron Francis at 403-846-8070 or talk to him at the next major powwow event.