On May 13, the Canadian Council for Aboriginal Business (CCAB) held its annual Calgary Gala at the Hyatt Regency Hotel and celebrated a new business award entitled, the Aboriginal Economic Development Corporation of the Year. 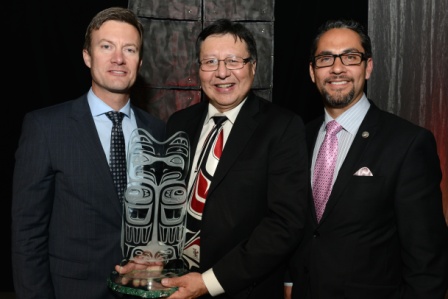 The CCAB and Sodexo Canada celebrated the Membertou Development Corporation (MDC) as the inaugural winner of the AEDC Award for 2014. The community of Membertou successfully overcame the significant challenges facing an urban First Nation community. In a two-decade span from 1995-2014, Membertou First Nation lifted itself from a poor community with low morale and a high unemployment rate to a very strong community within a community that has seen progress, economic growth and a commitment to its culture and heritage.

“The road to economic stability and development in Aboriginal communities has today more than ever become the role of Economic Development Corporations (EDCs).  As Aboriginal communities reach prosperity, they become strong examples for other communities to follow. Congratulations to Membertou for such impressive economic stewardship,” said CCAB President and CEO JP Gladu. “This new award will become the barometer of Aboriginal business growth and success around the world. After a hiatus of over 200 years, Aboriginal business is back and growing through diversification and investment that encourages entrepreneurial spirit and prosperity for all Canadians.

“The CCAB recognizes and thanks Sodexo Canada the founding and exclusive sponsor for the Aboriginal Economic Development Corporation (AEDC) of the Year Award.”

Membertou is situated three kilometers from downtown Sydney Nova Scotia and is one of five Mi’kmaw communities in Cape Breton. The First Nation has a population of over 1260. The path to economic success was made possible through three strategic decisions:

1. Membertou actively forged a new economic frontier for its people, one that built on the innovations of today while at the same time, incorporated indigenous knowledge-based principles of conservation, sustainability of resources and reverence for the land and the waters.

2. The Membertou Development Corporation increased its profile with major private sector companies by launching the Membertou Corporate Office in downtown Halifax in 2000 and forming lucrative partnerships across a diversity of private industry sectors. It has since been able to establish a strong corporate office within Membertou, which has allowed them to bring the Halifax workers home.

3. Membertou initiated education and career training programs for its residents in order to maximize employment opportunities within the newly forged business partnerships and initiatives.

The opportunities flowing from these decisions continue to build momentum for Membertou’s financial independence and self-sustainability.

“Sincere congratulations to the Membertou Development Corporation for this honour,” says Dean Johnson, President of Sodexo Canada. “When we speak about quality of life we see this exciting new award as an opportunity to celebrate the economic well-being and sustainability that Aboriginal Development Corporations bring to their communities.”

Brett Wilson, star of Dragon’s Den and Dave Tuccaro, CEO of Tuccaro Inc. were among the many guests who attended the gala. Pictured above with CCAB CEO Jim Gladu.

The Membertou Development Corporation was successful in diversifying its economy, including becoming ISO 9001 certified and creating a convention centre, gaming centre, business centre and many other investments within the community. The most recent addition is the Hampton Inn by Hilton Membertou, which opened in 2012.

The AECD award is the first of its kind in Canada and is designed to shine a light on the important role that Aboriginal corporations are playing in boardrooms and First Nation, Inuit and
Métis communities across the country.