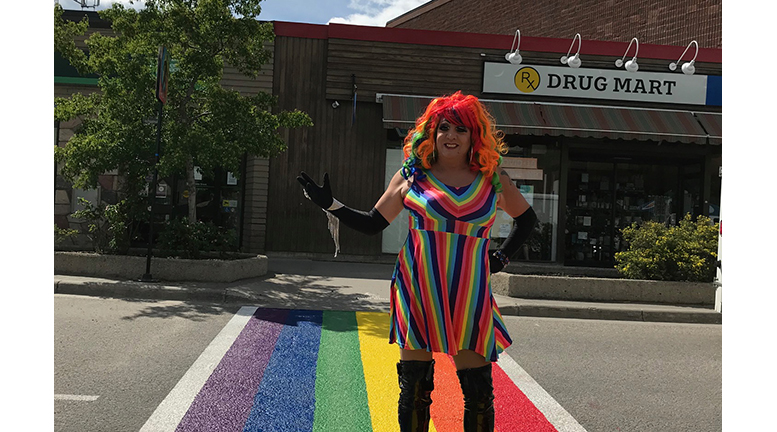 (ANNews) – Earlier this week I pulled in to the Municipality of Jasper, Alberta to cover the painting of a new rainbow crosswalk. Jasper was one of the first national parks in the country to have a rainbow crosswalk and proclamation, (2017) and, as locals will tell you, residents have worked hard to make it known that Jasper is an inclusive community.

This happened, in no small part, by the work of OUT Jasper and the groundwork laid by members of HIV West Yellowhead. Mychol Ormandy, the Director of OUT Jasper (outjasper.ca) coordinated the day’s events with his drag persona Toni Lester Van Blam, who was crowned Imperial Sovereign Majesty of the Imperial Sovereign Court of Wild Rose, some years back. 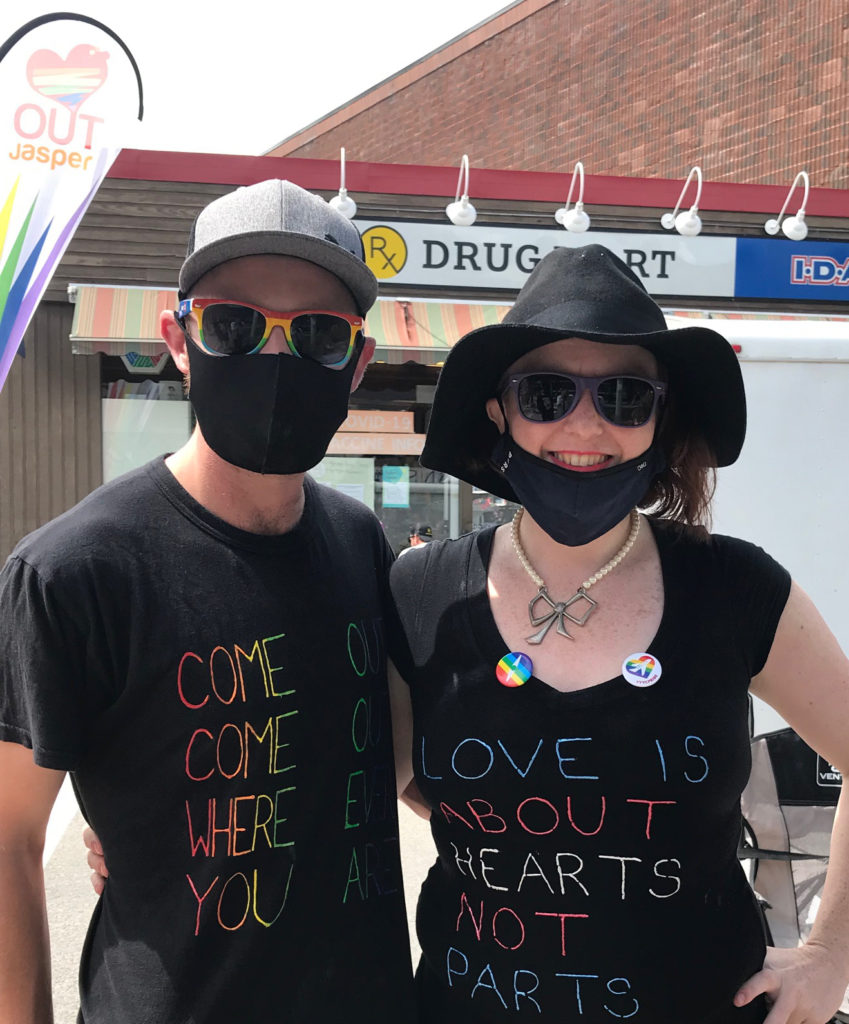 It is notable that many families were there, wanting to paint even a small section of the crosswalk, to be able to say they had been a part of it.

Aeryn Hisey and Laura Lanthier moved to Jasper just recently and met Mychol through OUT Jasper, while learning about the local scene, facilities and services. Laura explained that Mychol “mentioned about painting the crosswalk and, of course we had to participate – any community services [we want to be a part of]”.

Jasper municipality workers were on hand to set up traffic control and new signage and were enthusiastically engaging with the crowd. “Personally, I think it’s great,” said one worker, “I’m really glad it raises awareness because it’s good for the town, it’s good for the business – good for everyone.”

Jenna McGrath, Deputy Mayor for the Municipality of Jasper, has been a proponent of creating a more inclusive Jasper for some time now. McGrath began, “Mychol reached out and told us they were painting the crosswalk on June 24th so I grabbed my children and came down for the day.” She stressed the importance of having her children there because it “teaches acceptance and inclusivity. We pride ourselves on the openness and pride in our community and that’s why we created the Welcoming & Inclusive Communities Proclamation, back in 2017.” 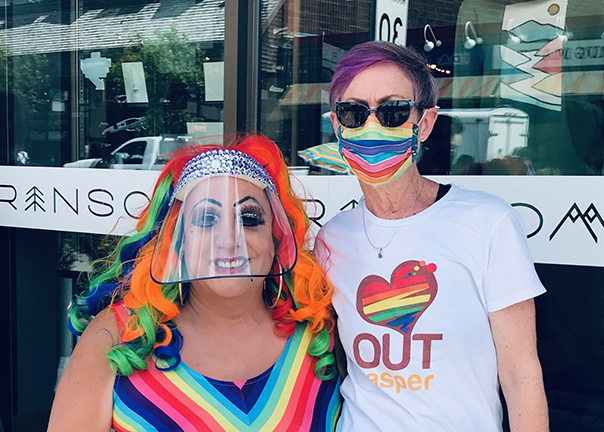 Toni Lester Van Blam / Mychol with Nancy, a member of the board of OUT Jasper and HIV West Yellowhead.

Lynn Wannop, owner of Coco’s Café and longtime resident of Jasper was chair for the Board of HIV West Yellowhead which started OUT Jasper.

“This is near and dear to my heart,” shares Wannop, “I think it is really important to have a rainbow crosswalk and Mychol and OUT Jasper fought to make it happen and is now able to continue with it year after year.”

Wannop explains that Jasper has come a long way with inclusivity. “In 2010 I [was the first one in town to] put the rainbow sticker on Coco’s door and it just got ripped down. That turned into a little bit of a political thing. All that did, (with that person who ripped it down), was bring more attention to why we put it up.” Lynn explains, “I learned along the way that I want to be a part of the solutions, not the problems. Instead of finding people dumb and ignorant about things, teach them why and how they can help and how they can grow to be part of [a healthy, accepting community].”

Mychol explains some of his recent history as a pride advocate. 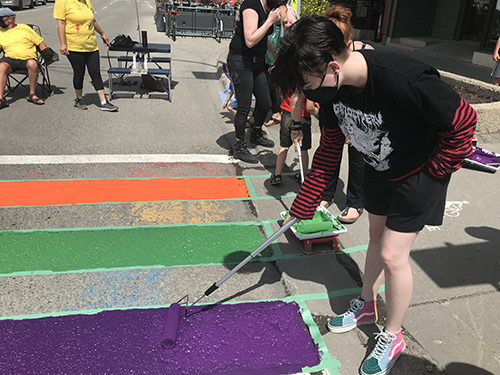 Grayson Hobson puts the finishing touches on the purple stripe of the rainbow crosswalk.

“When I was finished with my involvement with the Jasper Pride festival society, (2015), I contacted strong individuals that I wanted for the [OUT Jasper] Board and then made us a legal, non-profit organization. The first rainbow crosswalk was in 2017 in front of the Whistler’s Inn and the tourism info centre. Some people didn’t want it but we won in the long run.”

When asked to reflect on today’s proceedings, Mychol/Toni was jubilant. “I was just tickled pink with how everything went. The volunteers were exceptional, and the kids made my heart swell because they got to take part in painting and [creating a more accepting community].”

Packing and rounding up her children, Lynn Wannop reflected on the day-long event “Jasper is an amazing place. We’ve built such an inclusive community together that it’s now a safe space. We’re a tourist destination, right? And being a part of the LGBTQ2+ community, if you have somewhere to go and feel safe, you’re going to return.”