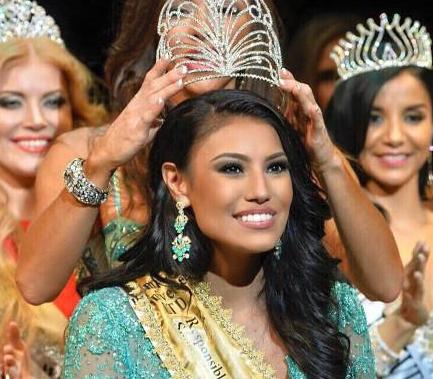 – There’s an old saying that dictates: the bigger you are, the harder you fall, but in the case of Ashley Burnham, nee Callingbull, it’s more like the braver you are, the taller you stand. This beautiful young woman, crowned Mrs. Universe 2015 in Minsk, Belarus on August 29, is much more than a pretty face, she’s a strong speaker who doesn’t shy away from the podium nor mince her words when it comes time to advocate for the things she believes in.

Following her recent win she took to the podium and urged Canadians to make the trip to the polls on October 19 to vote for a new leader, a new Prime Minister. She noted that Stephen Harper has “failed Aboriginal people” in refusing to consider First Nations issues a priority, particularly when it comes to addressing the “traumatizing issue” of missing and murdered Aboriginal women. She accused the federal government of maintaining an acrimonious and “controlling” attitude toward Indigenous peoples, saying that “we are in desperate need of a new Prime Minister,” one that will make First Nations issues and concerns a priority.

Some social media critics questioned her stance, suggesting that as a pageant winner she may have gone too far in Twitter comments that urged Canadians to get rid of the Harper regime and vote instead for a compassionate leader with an understanding of Aboriginal peoples and their concerns and political issues in Canada.

“Really?” she questioned on her Facebook a couple of days after winning her new crown.

“People think I’m too political on my first day as Mrs Universe?  Did you really think I was going to just sit there and look pretty? Definitely not. I have a title, a platform and a voice to make change and bring awareness to First Nations issues here in Canada, and I’m going to use this media to address those concerns to the best of my ability. I’m not your typical beauty queen; I have a voice for change and I’m going to use it.”

Her words have hit home in many communities and with the gatherings she’s attended in recent days as a special guest speaker. One of her first stops was a visit with the Chiefs of Ontario, who earlier this month launched the Who Is She? Fundraising Campaign, an effort that is being supported by a group of more than 160 communities. The funds raised will help pay for their own inquiry into missing and murdered Aboriginal women and girls, something the Chiefs have vowed to do since Prime Minister Harper won’t.

“Thank-you for your involvement with the Who Is She campaign,” Burnham began as she addressed Ontario’s Chiefs. “Growing up myself I lived through severe trauma; I lived through physical and sexual abuse for years so this is an issue that really touches my heart.”

Burnham talked about her life, her aspirations and her willingness to step up to the plate and bring Aboriginal issues to the forefront. She said winning the pageant and “becoming the first Canadian and First Nations’ woman to have won this title is a tremendous honour, and one that drew a great deal of media attention.”

The media attention, she pointed out, is welcome.

“It was always my plan that if I were to win this title I would address the many issues facing First Nations – because we need to be heard. People have been talking about these issues for years, but the media isn’t listening; we’re not important. When I won the title I said some things that shocked  a lot of people –  but those things needed to be said.”

Burnham, who reiterated her wish to see Canadians vote for “someone who cares about and listens to” Aboriginal citizens, also noted that Aboriginal women continue to be murdered and continue to go missing.

“It is both sad and terrifying to be a First Nations’ woman in this country. We don’t get the attention we deserve; it seems we are not as important; we are treated differently. Now that I am speaking up, now that I have this attention, I’m going to keep speaking for our sisters who were stolen from us and I’m going to keep fighting for justice because that is the right thing to do.”

Burnham, 25, is a member of the Enoch Cree Nation. A contestant at beauty pageants since the age of ten, she’s won many crowns over the years and came very close at winning others. She was chosen as Miss Canada for the Miss Friendship International Pageant held in Hubei, China in September 2010 and represented Canada at the Queen of the World Final held in Germany 2010. She also represented Canada at Miss Humanity International in Barbados in October 2011. Ashley was also Top 10 at the Miss World Canada competition in 2012.

Congratulatory messages have flooded in from across the country and the comments have been very positive. In a recent interview with Cold Lake Sun reporter, Celina Ip, Cold Lake First Nation Chief Bernice Martial lauded her win and talked about a visit she made to the community several years ago.

“We are all so excited for her,” emphasized Martial. “I mean to win that title is wonderful, especially coming from a Native young woman. She had come to Cold Lake just a few years ago to do a motivational speech. She briefly talked about the way she was raised by a single mother and her grandparents and she talked about the physical and sexual abuse she suffered as a child. She talked about issues like that and how it gave her strength and how she remained optimistic and was able to stay strong and take a different road.

“She’s a very smart woman and she has courage, a lot of courage. And because of her past and what has happened to her, I know she would do a really good job working with youth and with young women. She is capable of really talking about important issues because she has actually experienced things for herself in her own life. I’m pretty sure she’s going to be very inspirational to our young women and I’m so proud of her.”

The Mrs. Universe Pageant is an international beauty pageant that has celebrated and honoured married women since 2007.

Be the first to comment on "Mrs. Universe: It’s time for Stephen Harper to go!"