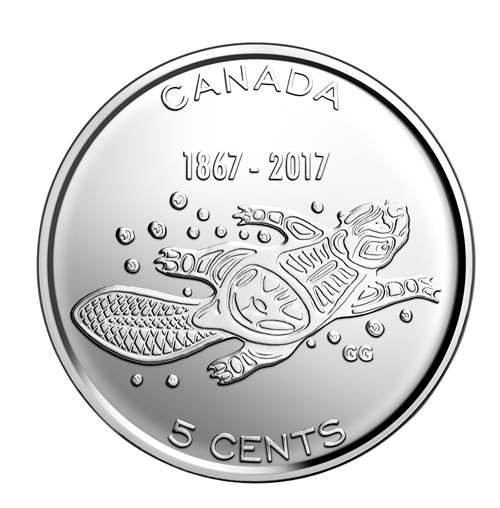 MILLBROOK FIRST NATION, NS, Nov. 2, 2016 /CNW/ – After thousands of Canadians took part in a national contest to create circulation coin designs celebrating Canada’s 150th anniversary in 2017, the Mint is finally revealing the choice of Canadians.  As simultaneous unveiling ceremonies unfold in the communities of each winning coin designer, the Mint today unveiled the work of graphic designer Gerald Gloade, which will grace the reverse (or tails) side of the 2017 five-cent circulation coin.

“I’ve always treasured the Alex Colville-designed set of centennial coins that I received as a young boy and having the chance to leave your own mark on a Canadian circulation coin is an amazing way to be involved in the celebration of Canada 150,” said Gerald Gloade. “As a proud Mi’kmaw, I was inspired to re-imagine the beaver of our traditional five-cent coin through the eyes of my own First Nations culture.”

“As the country looks forward to marking Canada’s 150 birthday next year, the Government of Canada is pleased that the Mint has given Canadians a taste of celebrations to come by unveiling the designs that will change the face of our 2017 circulation coins,” said the Honourable Bill Morneau, Minister of Finance.  “These coins will stand the test of time as memorable keepsakes of a milestone in Canadian history.” 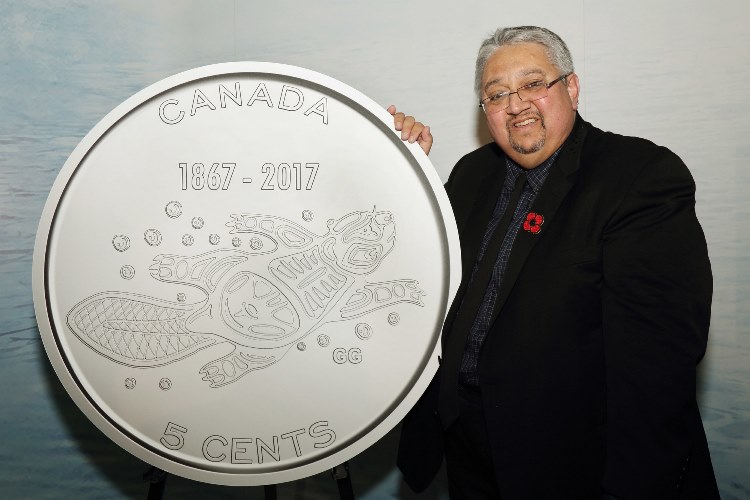 “From the artists who shared their vision to the people who voted for their favourite designs, Canadians showed how much Canada means to them,” said Sandra Hanington, President and CEO of the Royal Canadian Mint.  “The My Canada, My Inspiration coin design contest captured heartfelt expressions of the spirit of Canada and the Mint is proud that our 2017 circulation coins will give Canadians new stories worth holding onto as they celebrate Canada 150.”

Gerald Gloade’s dynamic and spiritual illustration of a solitary beaver was influenced by his northeastern woodland Algonkian heritage and the wildlife theme of Canada’s 1967 commemorative centennial coins.   Created entirely with digital tools, his interpretation of this iconic national symbol fuses the traditional with the new and celebrates the importance of First Nations culture to Canada as all its people unite in celebrating 150 years of Confederation.

On March 11, 2015, the Mint launched a national contest inviting the public to create new designs for a 2017 circulation coin series celebrating Canada’s 150th anniversary from five theme perspectives: Our Wonders, Our Character, Our Achievements, Our Passions, and Canada’s Future.  After the public cast over one million online votes, Mr. Gloade’s design won the popular vote among five finalists in the running for the coin celebrating Our Passions.

The finalists in each category were determined by the Royal Canadian Mint and a panel of notable Canadians. The winning design per category was selected by Canadians in an online vote which took place in September 2015. Each 2017-dated circulation coin denomination will feature one of the winning designs and Canadians will be able to find these coins in their change next spring.

The Mint is also launching an extensive collector coin program in celebration of Canada 150.  Interested customers can sign up at www.mint.ca to receive the latest product news.

About the Royal Canadian Mint
The Royal Canadian Mint is the Crown Corporation responsible for the minting and distribution of Canada’s circulation coins. An ISO 9001-2008 certified company the Mint is recognized as one of the largest and most versatile mints in the world, offering a wide range of specialized, high quality coinage products and related services on an international scale. For more information on the Mint, its products and services, visit www.mint.ca