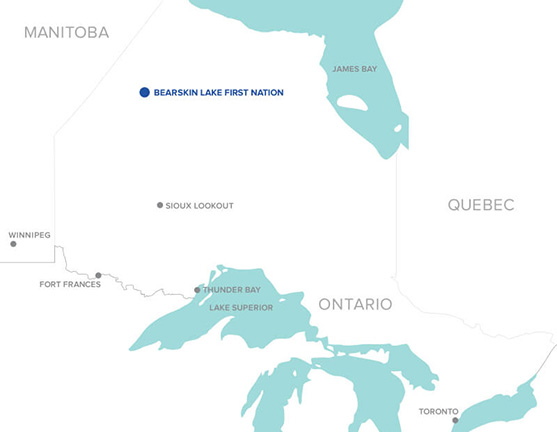 (ANNews) – Since late last month, the Bearskin Lake First Nation has been in a state of emergency as COVID runs rampant throughout the 400 member Nation, in which 201 people are infected with the virus.

Since the beginning of the outbreak, the Chief of the Bearskin Lake Nation — along with other Indigenous leaders — have been calling for immediate military intervention from the federal government, as the Nation is running low on available front-line workers.

Finally on Jan. 8, four members of the Canadian armed forces arrived in the Nation to conduct an initial assessment.

Indigenous Services Canada (ISC) is also said to have funnelled approximately $1.2 million in financial aid to the Nation.

However despite the support from the armed forces and ISC, former Nishnawbe Aski Nation Grand Chief Charles Fox has said that the Bearskin Nation was expecting a much better response, saying there was a “total indifference to the First Nation’s situation; I expected more of a human response.

“To say, ‘We’re here for you, truth and reconciliation. We’re here, we’re going to live up that mantra,’ not evident.”

Meanwhile, the armed forces has announced that its medical personnel is being stretched thin — which likely means that it is not able to provide additional medical support to the country.

Defence Department spokesman Daniel Le Bouthillier, told The Canadian Press, “The CAF has less than 50 per cent of required physicians available to conduct routine activities or operationally deploy along with only 75 percent of nurses and 65 percent of medical technicians.”

“Over the course of the pandemic, (Canadian Forces Health Services’) strength has decreased to the point where it can only fill 60 percent of its mandated tasks,” he added.

In fact, the limited amount of medical staff in the armed forces has affected the recruitment and training of soldiers, along with mission deployments.

“Health care, screening, vaccinations and testing are all needed to ensure our troops are ready and prepared to deploy when needed,” said Le Bouthillier.

In addition to the country’s current COVID situation, it was recently reported that 75 percent of Manitoba First Nations have active cases of the virus.

Indigenous people in that province now make up a quarter of all hospitalizations.

NDP MP for Churchill–Keewatinook Aski, Niki Ashton, even called upon the government for military support for Manitoba.

“Our region has gone above and beyond to stay safe, but more people are getting sick and we need the federal government to respond to the current urgent needs of communities,” MP Ashton said.

“Remote and isolated communities like Manto Sipi Cree Nation require particular support. This includes bringing the military back to ensure communities are able to function and limit the spread of COVID-19. Lives are on the line.”