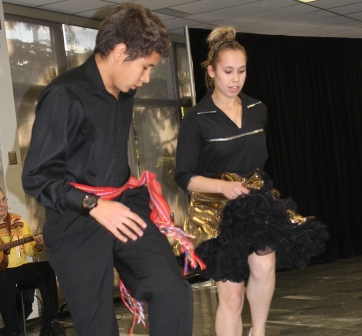 When Jolene Langford first donned her dancing clothes she was about seven years old.

“I was very nervous back then, and even today I am a bit edgy when I step on the dance floor, but when I’m dancing with the group all of that tension disappears and everything becomes much easier,” explained the 20 year old receptionist, who talks proudly about her culture and about the team of dancers she appears with as part of the well-known and always-booked dance group, The Metis Child and Family Jiggers.

“We perform in various venues and have made many appearances at different events over the years.  In 2010 we even travelled to Hawaii where we joined up with other Aboriginal groups from around the world to perform as part of a global Indigenous event that gave us the opportunity to showcase what Canadian Métis dance is all about. It was a great time and one that I’ll remember forever.” 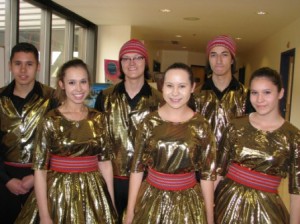 Jolene Langford is one of Don Langford’s granddaughters and one of four family members who participates with the popular group. Others include Jillian, Jordan and Jada Langford as well as Luc Gauthier, Joel Gladue, Jade Fiddler, Jennie Trouck and Amanda Belcourt, the latter of whom has since moved out of the region but still comes out to participate in some of the group’s annual undertakings.

“They are a fantastic group, remarkable young people who are easy to work with and very polished in their presentation of Métis dance,” noted Don Langford, the Executive Director of Edmonton-based Métis Child and Family Services and an Elder who participates with Kingsway Avenue-based, Amiskwaciy Academy.

The elder statesman of the family, Langford attributes much of the group’s success to the efforts of the its manager, Florence Gaucher.

“She is the clock that makes this group tick; she’s the person responsible for their bookings, for their travel, for their practice sessions, the costume designs and just about every other facet of the groups’ success,” he assured. “Florence’s extraordinary efforts and her calm and collective demeanour help to ensure the stability of the group and everything that happens within it.”

And what is Don’s role?

“I’m the driver, the announcer and a real proud grandpa,” he smiled, talking about the extraordinary behind-the-scenes efforts the young dance troupe contributes, especially when the gig is out of the Edmonton area. “We often appear in out of town venues, sometimes hours away from home and it’s not likely that many people realize the commitment these young dancers and their families make as part of the group. They appear in about two dozen events every year and many are far from home. Sometimes there’s a two or three hour road trip and then a performance or two and then back into the vehicle for the return trip home. It’s a big commitment for anyone, but for dancers in their teens to be committed and focussed the way they are speaks volumes about their maturity and their dedication and commitment to both their culture and the audiences that they dance for.”

“We are all very proud of their attitudes, their dedication and determination,” he noted, adding that the group was first introduced by former CNFC director, Georgina Donald, who began working with the dancers when they still practiced at the Native Senior’s Centre. They moved away from that venue because more space was needed and evening practices became part of the group’s requirements, while the Senior’s Centre is open Monday through Friday from 8:30 a.m. until 5:30 p.m. 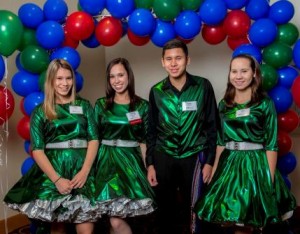 Members of the  Metis Child and Family Dancers – Jada, Jolenne, Jordan and Jillian Langford.  Photo courtesy of the BBMA

The Métis Child and Family Jiggers strut their stuff on dance floors, on stages, in gymnasiums and just about every other surface you can think of, but they are also known for their competitive spirit and for the dance competitions they enter from time to time. Florence’s son, Luc Gauthier. for example, was named the Alberta Male Adult Role Model of the Year during the 2013 Alberta Aboriginal Youth Achievement Awards gala, something that caught him by surprise. A year earlier he participated in the same event when he served on the AAYAA winner selection committee.

“It gave me a real sense of purpose, a sense of pride, knowing that I am one of the youths who really cares for his culture,” noted Gauthier, who makes his home in St. Albert.

The AAYAA program, which has been ongoing since it was developed by the Métis Nation of Alberta in 2003, honours the outstanding efforts and achievements of young people from the Métis, First Nation and Inuit communities. The annual awards program is currently being directed by the Rupertsland Institute.

The annual event, which also invites professional dance groups to participate, albeit in the professional category, draws dancers and spectators from across the western provinces, and often from beyond. Performing groups that have attended the popular event include the sensational Asham Stompers, the renown Sagkeeng’s Finest, the very popular Kikino Dancers and numerous others.

The Métis Child & Family Jiggers are committed to the cultural preservation of Métis traditional music and dance. They promote the Métis traditions of music and dance by performing at various functions and events. Some of the traditional dances performed by the troup include the Drops of Brandy, the Duck dance, Reel of 8, Reel of 4 and of course the Red River Jig which is the dance most widely known. The Red River Jig was by far the most popular dance tune in Rupert’s Land and is still played and danced by many Métis across Canada.

The dancers have been performing since 2004 and are selected from interested children in the greater Edmonton area.  “Métis fiddle music,” concluded Florence Gaucher, “is an oral tradition handed down from generation to generation. And I am very proud of these fine young performers who are making sure that our traditions flourish.”