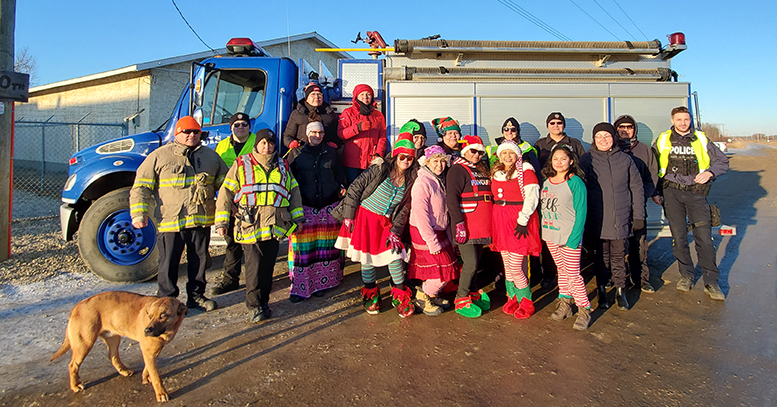 (ANNews) – The four Nations of Maskwacis rotate the duties of their annual Christmas Candy Cane Charity Checkstop. Montana First Nation was the host of this year’s celebration. A total of 65 volunteers from all four communities made the very well-organized event a success. With their help they raised a total of $ 6,580.90.

In total the group received over 42 toys and 104 items of food that were split between the four Nations that make up Maskwacis which include Montana Cree, Samson Cree, Louis Bull Cree and Ermineskin Cree. The community of Pigeon Lake is included in Maskwacis but is land that is collectively owned by all four nations of Maskwacis,

“On behalf of the organizers of the 9th Annual Candy Cane Lane Charity Checkstop, we would like to thank the Comm”unity” of Maskwacis and everyone who contributed to our non-enforced event,” said Luci S. Johnson, Paralegal, Maskwacis Paralegal Services Owner, Courtworker / Advocate, Maskwacis Wiyasowewin (Justice) Society. 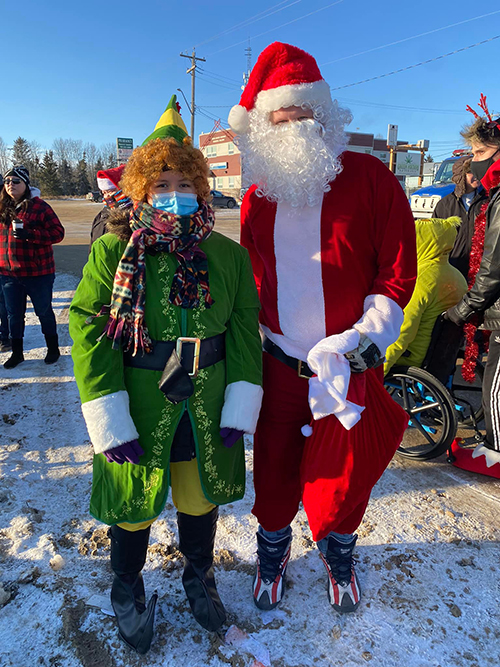 “As this was the 9th year to host the Charity Checkstop we were amazed with the volunteers, organizers and the out-pour of donations in the amount of $6580.90 with two big donations of $1,000 each, by Mark Wicklund from Cashbox and by a senior gentleman from Calgary who wanted to donate directly to Samson Food Bank,” said Johnson. Each of the five communities received $1315.16.

“We also want to thank the Montana First Nation host of this year’s event, Ingrid Kellen and their Community Rep plus staff, and daughter Samantha Kellen all dressed up in Christmas costumes,” said Johnson.

“Others who came out to donate their time included, DeAnne Lightning, Ermineskin Cree Nation Community Rep and her staff Brian Small the Ginger-Breadman, Jess Omeasoo and Clancey Alice Threefingers. The Louis Bull First Nation Rep and her staff all dressed up as our Elves. Also Marcella Dion from Pigeon Lake and her workers, Carmella Cutknife, Angela Bull, Jennifer A. Nepoose were Samson Secret Santa.” 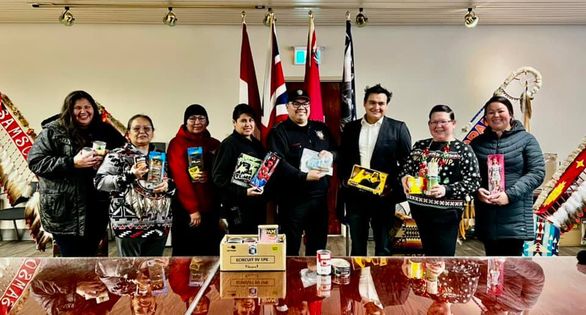 Johnson added, Mark Wicklund and Nicole Wicklund from Cashbox donated their time to be Christmas Santa also for the first shift with his daughter.

“Paula Johnson- Jefferson and Lavern Jefferson from Meskwaki, Iowa, USA also took part in the event as sexy Ms. Claus and her helper for the afternoon shift,” said Johnson.

“Shout out to Ermineskin Counselor Mr. Wildcat for the donation of 300 dollars (worth) of toys plus coffee and donuts for the volunteers.”

“We also want to thank our sweet lil Samson Cree Nation warrior Keslee Littlechild for coming and being part of the event. To Noreen Saddleback for her prayers before we started and had a great time with no issues.”

“We also gave out 1500 prevention bags that had materials from Safe Roads, RCMP promotional items, MADD Ribbons Edmonton Chapter and a candy cane.”

“A donation of 2000 candy canes from Mark Wicklund from Cashbox plus $1,000.00 towards the event and several toys. Local Cree Councilor Shay Yellowbird donated the 300 candy canes for Santa to give out and goodie-bags donated by Caysha Saddleback,” said Johnson.

“Let’s not forget the hospitality from Leann Rain and her delicious tacos and ribs and fries plus the yummy ten Burger Baron pizzas for the volunteers. Deneen Lawrence for her two take-10 Tim Horton’s coffee. Also, a dozen donuts from the Court Assistance Program Society (CAPS) from Edmonton for our volunteers.”

Johnson said the prevention of Drinking and Driving during the Holidays is the main goal of the event. The overall success of the event could not be achieved without the help of the communities and volunteers.