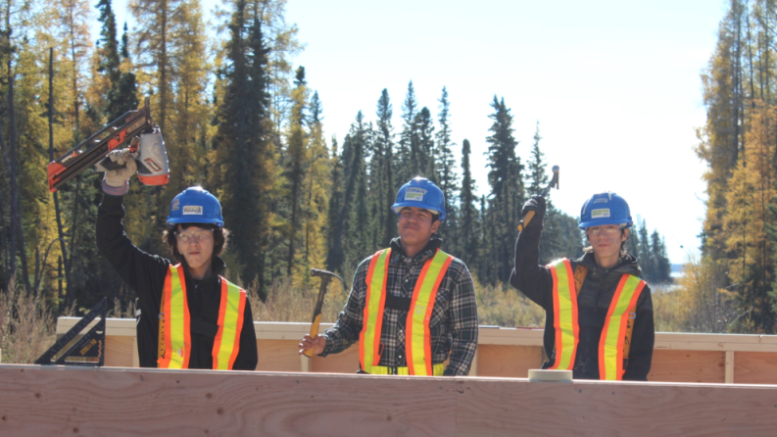 Your Choice Homes is working with students from the Ermineskin Cree Nation in a project to build eight homes in an Elder's Village at Maswacis. (File photo from Your Choice Homes)

(ANNews) – A new and exciting pilot program announced by Indigenous Services Canada (ISC) in late April got underway on the Ermineskin Cree First Nation at Maskwacis in early May when a group of 36 students, 12 from each of the community’s three high schools, began to build the first of eight new homes in an Elder’s Village project that will be funded in part by an ISC contribution of nearly $1,000,000 .

“It is a very unique program that not only builds much needed homes on the reserve but also provides high school students the opportunity to learn construction trades through hands-on involvement,” noted Jay Noel, the program manager and business development community partner with Your Choice Homes, the Saskatchewan-based company heading up the construction project. “The first three homes in the Elder’s Village project will be built by the students in a program that will continue into the summer months.”

The other five homes will be up for grabs by local tradesmen and high school students who are inspired by the work they are doing and apply for an apprenticeship in their trade of choice. It is expected that this project will be the first in several other projects that will be designed to create more needed housing in the future.

Ermineskin leadership noted that “this is a new style I’m learning, exposing students to the construction careers as they learn and work with pride by contributing to their community. Our partner, YC Homes, are experts at turning blueprints into curriculums and job sites into classrooms. This is a unique funding approach being taken by ISC as they are adding a training component, Housing through Education, to the local (Elder’s Village) construction project. This is a very important program for the Ermineskin Cree Nation Housing Department as over the next several years the number of contractors retiring far exceed the number of youth that are (currently) registered to start their Journey To Apprenticeship.”

“This is a unique opportunity for Maskwacis students to receive high school credits towards their diploma by learning valuable life skills at the time receiving future apprenticeship hours for potential future careers in construction,” stated Ermineskin Chief Craig Makinaw.

Your Choice Homes began building homes for First Nations in Saskatchewan and have since initiated programs outside that province.

“We have been involved in Alberta for a couple of years,” noted Noel, who said he’s been active in home building on the O’Chiese Nation, the Piikani First Nation and most recently, the Ermineskin Cree Nation.

“These are small but very important projects; if one community can build one new house a year and utilize its student (population), it’s amazing what changes can happen in a community.

“That’s because respect for (home-built) housing will increase because kids aren’t seeing them come in on wheels anymore. The local economy will improve because all those housing dollars aren’t being given away to housing manufacturers and local youth can get involved not just in helping to build a home, but also learning what has to be done for them to take up a trade and use their skills to work in and help improve their respective communities.

“It is joy to me because of all the positive feedback we get from aunts and uncles and Elders and community members, and particularly gratifying to see how encouraging these communities are when it comes to their youth.”

“We are the product manager for the students, liaison between the classroom and the job site and we are the contractor,” noted Noel. “We try to hire locally because it sends a good message to have some of the students whose aunts and uncles are in the trades in the construction program because that also helps keep the money in the community.”

The schools also play an important role: the teachers work with an online curriculum and Noel says they do a great job when it comes to explaining the ongoing movement of the program and the hands-on work that they will be participating in. It is safer this way because students won’t be stunned when they get to the job site, they’ll already have some understanding of what they will be doing. For students who begin to work on a home and then finish the job it’s a great sense of pride and accomplishment; knowing that they had a hand in building this new home brings pride that can only be accomplished through participation.”

It is no secret that housing shortages are one of the main and most serious issues facing Indigenous citizens living in First Nation communities across Canada. Alberta is among the provinces currently facing the most serious housing issues; in fact, Maskwacis-based Ermineskin First Nation Councillor Jason Makinaw recently told media that his community was about 500 new homes short of what is needed to properly house the community’s population. He said that Elders face the biggest crisis and noted that many are forced to live with their children and grandchildren in houses that are already often crowded and uncomfortable.

In a recent interview, he told CBC that building homes for the Elders is really about “bridging the gaps” and that he’d like to see “our Elders live in stress free environments and in a peaceful way. With this project, they’ll be living independently but with someone to assist them with their daily needs. We always want our Elders to be able to help guide the youth; this is a turnaround (in that) our youth are leading a project to build homes for the Elders.”

A similar project, also utilizing YC Homes, took place in 2018 on southern Alberta’s Piikani Nation when a dozen high school students worked for eight weeks to build a small 750 square foot home for an Elder on that nation.