“Oh Goddd how long are aboriginal people going to use what happened as a crutch to suck more money out of Canadians?” Winnipeg teacher Brad Badiuk wrote on Facebook last month. “They have contributed NOTHING to the development of Canada. Just standing with their hand out. Get to work, tear the treaties and shut the FK up already. Why am I on the hook for their cultural support?”

Another day in Winnipeg, another hateful screed against the city’s growing indigenous population. This one from a teacher (now on unpaid leave) at Kelvin High School, long considered among the city’s progressive schools—alma mater to just about every Winipegger of note, from Marshall McLuhan to Izzy Asper, Fred Penner and Neil Young. 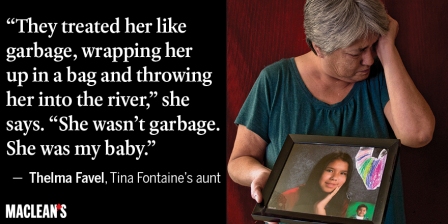 Badiuk’s comments came to light the day Rinelle Harper—the shy 16-year-old indigenous girl left for dead in the city’s Assiniboine River after a brutal sexual assault—spoke publicly for the first time after her recovery. She called for an inquiry to help explain why so many indigenous girls and women are being murdered in Winnipeg, and elsewhere in Canada.

Badiuk’s comments came while the city was still reeling from the murder of Tina Fontaine, a 15-year-old child from the Sagkeeng First Nation who was wrapped in plastic and tossed into the Red River after being sexually exploited in the city’s core.

They came after Nunavummiuq musician Tanya Tagaq, last year’s Polaris Music Prize winner, who complained that while out to lunch in downtown Winnipeg where she was performing with the city’s ballet this fall, “a man started following me calling me a ‘sexy little Indian’ and asking to f–k.”

They came the very week an inquest issued its findings in the death of Brian Sinclair, an indigenous 45-year-old who died from an entirely treatable infection after being ignored for 34 hours in a city ER.

They came in the wake of a civic election dominated by race relations after a racist rant by a frontrunner’s wife went viral: “I’m really tired of getting harassed by the drunken native guys” downtown, Gord Steeves’s wife, Lori, wrote on Facebook. “We all donate enough money to keep their sorry asses on welfare, so shut the f–k up and don’t ask me for another handout!” The former city councillor and long-serving, centrist politician didn’t bother apologizing. He lost, but not because of this.

For decades, the friendly Prairie city has been known for its smiling, lefty premiers, pacifist, Mennonite writers and a love affair with the Jets. Licence plates here bear the tag “Friendly Manitoba.” But events of last fall served to expose a darker reality. The Manitoba capital is deeply divided along ethnic lines. It manifestly does not provide equal opportunity for Aboriginals. And it is quickly becoming known for the subhuman treatment of its First Nations citizens, who suffer daily indignities and appalling violence. Winnipeg is arguably becoming Canada’s most racist city.

Click here to read more of this article by Nancy MacDonald in the January 22, 2015 editon of Macleans Magazine.

Be the first to comment on "Macleans: Welcome to Winnipeg – where Canada’s racism problem is at its worst"