(ANNews) – The 2016 Mrs. Canada Globe Pageant will take place at the Conexus Arts Centre in Regina, Saskatchewan on April 1-2, 2016. The two-day event will culminate when the judges presiding over the contest choose a winner to represent Canada at the Mrs. World Globe Pageant that will be held later this year in Shenzhen, China. Since 1996 the Mrs. Globe Pageant is the longest running and has been producing one of the most recognized and celebrated international pageants in the world. The annual pageant celebrates beauty, culture and charity for women.

“It’s a very exciting time for both of us,” smiled Barbara Dumigan-Jackson, who along with fellow contestant, Sheena Papin, will vie for the honour of representing Canada to the world. “We don’t know how many Aboriginal women will be competing, but Sheena and I are very proud to be among the many women who will seek the privilege of representing Canada.” 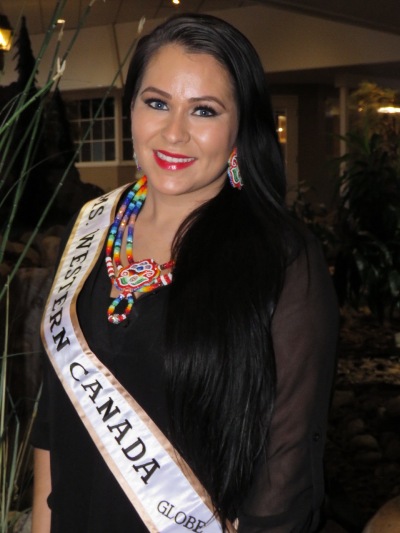 Barbara Dumigan-Jackson is the reigning Ms Western Canada Globe pageant Queen. She will vie for Ms Canada Globe title in Regina on April 1-2

Dumigan-Jackson, a Cree woman whose family hails from the Saddle Lake and Whitefish Lake First Nations, is a student at Kings University, a mother of three children and a survivor of domestic abuse. She wants to put any success she earns toward her goal of helping other women overcome adversity, while at the same time promoting healthy lifestyles and positive choices and encouraging women to seek out and secure career paths that will enhance their lives and provide better opportunities for their growing children.

“It’s not really about winning the crown or adding a title to my name,” assured Dumigan-Jackson. “For me it’s about adding my voice, representing my people, taking a stance for youth and acting as a role model that others can emulate. I want to make a positive difference in the Indigenous community and I hope to encourage others to do likewise.” 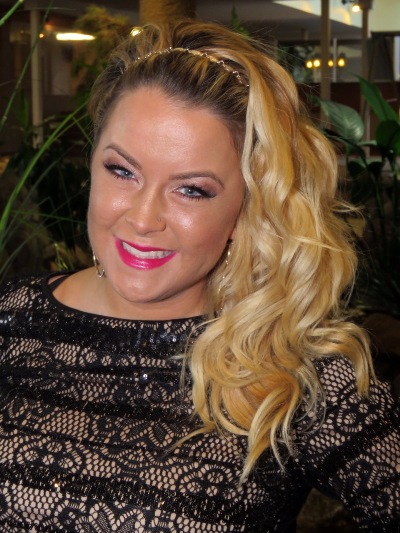 Sheena Papin is a member of the Enoch Cree First Nation. Before entering her name as a contestant in the upcoming Mrs. Canada Globe competition, Papin had only participated in one previous pageant. She is the mother of two year old daughter, Kheriyae, and is engaged to fiancée Justin Christian. Papin is also a sales director with Mary Kay Cosmetics, a professional hip-hop dancer and a fancy shawl powwow dancer. At age 22 she completed her criminology degree at the University of Alberta and though she didn’t pursue it as a career choice, she did gain the experience necessary to understand that no matter what road one takes, success is something that has to be earned.

“No question about it,” she assured. “If you want to achieve your goals you have to put in the effort it takes to do so. I have a lot of energy and I am confident that no matter what comes next, I will be ready.”

Papin has also earned her 2nd Degree Black Belt in Tae Kwon Do and credits her healthy living choices as one of the main reasons she is able to fulfill her daily goals.

“To date,” noted Papin, “my biggest business or career-related success has come with my work at Mary Kay. In the five years I have been with the company I have earned several diamond rings and three cars; I’m currently driving a pink Ford Edge but my next goal is to earn the prestigious Pink Cadillac.”

During her first year (2013) as a director with the world-renown cosmetic company Papin was named “Rookie of the Year,” something that inspired her to become even more successful. 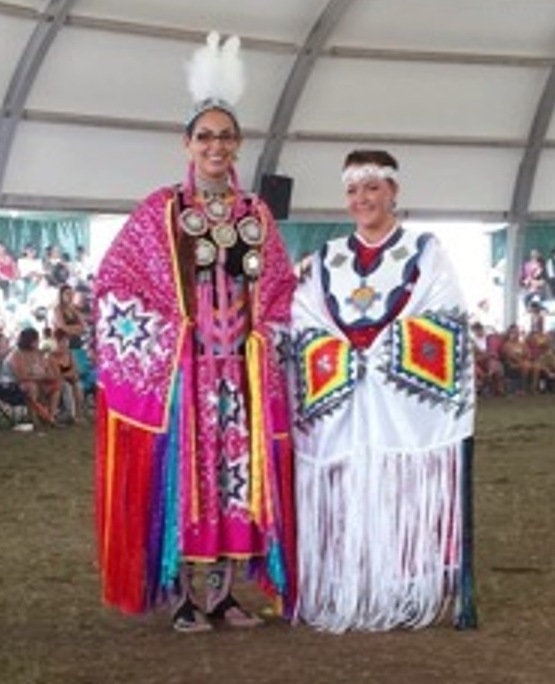 My initiation into the powwow circle came earlier this year when I attended the Enoch Powwow with my girlfriend Erin Meetoos, explained Sheena Papin (r).

“What I’m most passionate about is being able to empower women via their use of these fantastic products. They not only beautify your skin, they help to enhance self-confidence and self-esteem, and for any woman who wants to participate in the Mary Kay sales program, there is also a very positive career opportunity that one can capitalize on. I hope to be able to use my skills to create positive opportunities for women; if I can just help one person find the road to success, or even to feel positive about themselves and their futures, then I will have fulfilled one of my goals.”

The Mrs. Canada Globe Pageant attracted Papin because of what it can do to help in the achievement of her future plans. She currently holds the title of Mrs. Northern Canada Globe.

“I chose to be part of the Globe organization and pageant because it gives me another platform to empower young women. I want to show them that no matter what you want to achieve in life, you can do it; never give up your dreams, just work hard and you will achieve them. I am so excited to be chosen as a delegate and share this experience with all the other women across Canada. I also want to help do my part in bringing about real awareness to issues facing Indigenous women, issues like domestic violence and alcohol and substance abuse.” 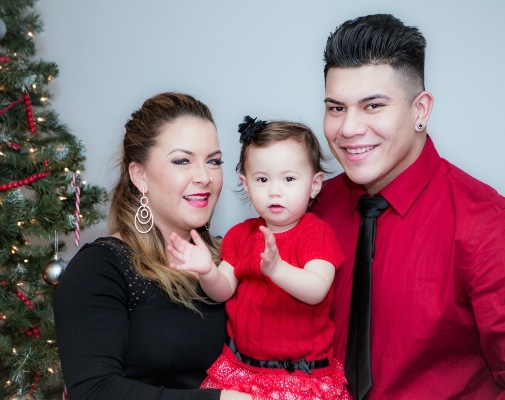 Sheena, her daughter, Kheriyae and fiancee Justin Christian pose for a 2015 Christmas photograph.

All monies collected through the Mrs. Canada Globe Pageant will be donated to the WIN (Women in Need) Foundation and to the Sophia House in Regina – organizations that work to help women and families recover from the trauma of domestic violence.

On March 20 from 4 to 8 pm, Barbara and Sheena will help host a local fashion show to raise the money they need to make the trip to Regina in April to compete in the pageant. Unlike the other events, this fashion show fundraiser will help the two women pay their expenses to the pageant. The fashion show will take place at Concordia University; tickets to the event are just $20.

“It will be a fun time for everyone,” noted both Papin and Dumigan-Jackson. “The event is called: The Walk to End Domestic Violence and will include an evening of entertainment, guest speakers, information booths, raffles, a live DJ and much more. We’d like to invite everyone in Edmonton and area to come out and support this worthwhile event. You’ll have a great time; you could win one of the raffles and of course you will be supporting our efforts to bring the Mrs. Canada Globe trophy to Edmonton.” 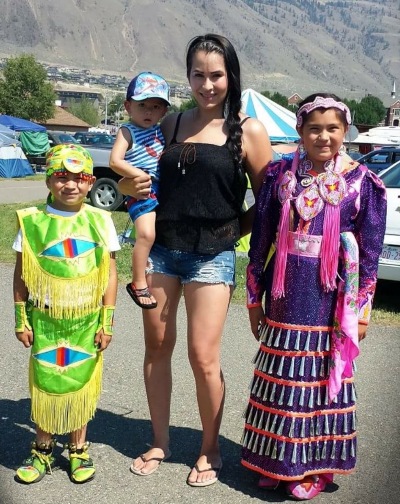 Dumigan-Jackson said that she is a “very dedicated supporter of the WIN Foundation because of the work they do and the achievements they have made when it comes to helping women in need.”

“They also raise awareness about domestic violence and violence in general and that is something I can support because I am a victim and survivor of domestic abuse,” she explained. “I escaped that situation seven years ago. I am thankful for having the courage and strength to leave for the betterment of my children. I found that strength in my culture, my prayers and from the people who helped and supported me. Today I am proud that I found the courage to get away and the fortitude to carry on and try to help make a difference in the lives of other women who have faced or are facing the same type of situation.”

Dumigan-Jackson completed her Bachelor of Arts Degree at Concordia University in June of 2015 and is currently enrolled at Kings University where she has one year left before completing her Bachelor of Education After-Degree. She is also a youth and child care worker who has experience working with at-risk teenagers. Currently the title holder of Ms. Western Canada Globe, Dumigan-Jackson is competing on the national level this year as a stepping stone to help further her career as a community worker who specializes in providing services to both women and children.

“Abuse comes in many forms, physical, mental, spiritual and emotional and effects men, women and children,” she emphasized. “I want to help raise awareness and let others know that contrary to what some people might believe, there is a way to escape abusive situations. Help is available and once you find it, you will have the opportunity to once again be happy and successful. 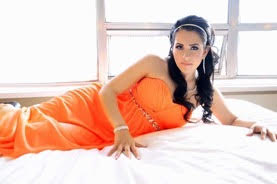 Barbara – all glammed up.

“We all have a purpose in life, a real purpose for living; it’s just a matter of finding it. My real purpose is something I feel so strong in my heart that it touches me on an emotional level. My purpose is to be the best mother I possibly can be, the best daughter, sister, girl friend, aunt, friend, and cousin. I want strangers to feel welcome; I want to help the less fortunate; I want to help our struggling youth and others who are in need.”

Dumigan-Jackson is a dedicated and determined worker who volunteers much of her time trying to find ways to help the less fortunate. In addition to the upcoming fashion show she is also hosting the Second Annual Making Strides to Help Save Lives Suicide Prevention Walk on March 6; the event gets underway at City Hall beginning at 2 pm.

“It’s been almost nine years since I lost my brother Melvyn to suicide,” she explained in a recent interview. “Suicide affects us all, there’s not a day that goes by that I don’t think of him. I was unable to help my brother but losing him to suicide showed me a life lesson, one that I am utilizing to help our youth that are suffering and hurting today. I believe by coming together and raising awareness and reaching out to those in need, we can help others before it’s too late.” 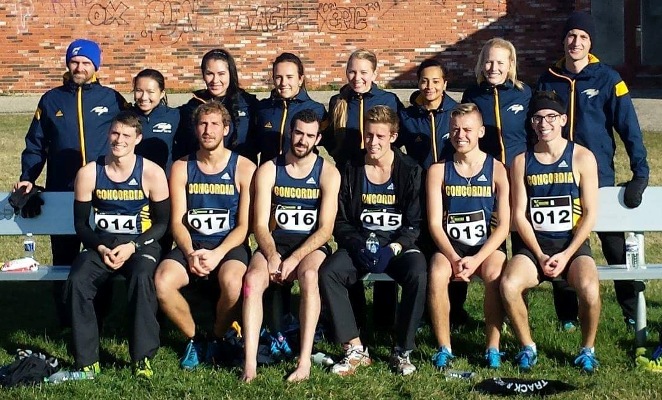 Barbara Dumigan-Jackson (2nd player from the left in back row) poses with Concordia College track and field coaches and teammates.

“Giving back in any form is the simplest act of human kindness,” she stated. “Money to a homeless organization, volunteering, donating food/clothing, positive words, your time and even something as simple as a smile are just some ways you can be a giver. Not everyone is willing to give, help or support. Giving is not a matter of money; it’s about giving some love back and showing you care. As for me, helping people has always been my sole purpose in life. I truly believe I was destined to help those who need helping. I want my life to have a meaning; I want to help others by showing them how to make positive changes to their lives, to listen and support them in any way possible.”

An athletic person who stays away from smoking, drinking and abusing drugs, Barbara Dumigan-Jackson is active and healthy.

“I’ve been an athlete my whole life,” she explained. “I’ve been a competitive runner since I was in Grade 4 and have completed throughout Canada and the United States. I’ve also competed in two North American Indigenous Games and placed in both of them. I was a competitive runner with the Concordia University Thunder Team for four years and recently competed in the Canadian National Championships in Montreal in February of 2015 where I placed fifth in the 400m run.

She has also earned a Fine Arts Award at Concordia University (2014) and was awarded with the Esquao Arts Award l(2015) from the Institute for the Advancement of Aboriginal Women.

“My children motivate, inspire and encourage me every day to be the best mother I possibly can be,” concluded Barbara. “I’ve always lived an addictions free life for the betterment of my children, myself and the people I surround myself with.”

For more information about the Mrs. Canada Globe Pageant 2016 see the website at: mrscanadaglobe.com.

In Her Shoes Gala: Raising awareness of domestic abuse – June 15

Be the first to comment on "Local women to compete in Mrs. Globe Canada Pageant in Regina: April 1 – 2"