A student from Lethbridge College is the recipient of the 2014 Alberta Equity Scholarship, an initiative of the Alberta media stations of the Jim Pattison Broadcast Group.

Rachel CrowSpreadingWings is a 2nd year Communication Arts Student, majoring in Broadcast Journalism. She is also member of Southern Alberta’s Kainai First Nation.  Rachel has had dreams of a broadcasting career since a very young age.

She notes, “…as I grew, I learned that I want to be a voice for the people. I want to inspire others to find themselves and to achieve what is with their heart and to remember the strength they come from.” 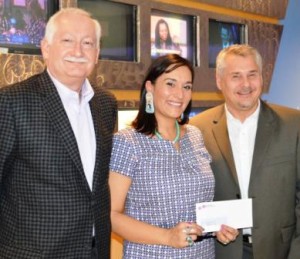 She has already had experience on-air in Washington State and on community cable in Alberta with Prairie Phyre First Nations News.

Her industry and school contacts describe Rachel as “motivated” and “committed”, with a “positive can-do attititude” and “a great screen presence.”  Another industry employer lauds her as “…a leader who is not fearful of crossing barriers and speaking out.”

As well as maintaining a positive grade point average at Lethbridge College, Rachel designs clothes, sings, and dances at powwows. She is also a single mother.

Rachel CrowSpreadingWings was recently presented with the $2500 Alberta Equity Scholarship from the Jim Pattison Broadcast Group to assist her in pursuing her education and career goals.

The Alberta Equity Scholarship was instituted in 2009 to address the shortage of Alberta broadcasters from four under-represented groups; Aboriginal Peoples, Persons with Disabilities, Members of Visible Minorities, and Women.

“The Jim Pattison Broadcast Group,” explained General Manager Dave Sherwood, “believes that by supporting the career development of these groups in Alberta broadcasting, the industry will access an untapped pool of potentially talented employees,
encourage diverse viewpoints and backgrounds, enhance relationships with local communities, and broaden the advertiser and audience base.”

Last year, Jeff Keddy, a Broadcast Systems Technology Student from the Southern Alberta Institute of Technology, received the award. Jeff is a First Nations student with a disability suffered in a previous work-related accident. All of the previous winners have also had to overcome significant obstacles to continue in their chosen careers.

The Broadcast Group, which is celebrating its 49th anniversary as a leader in radio and television programming in Alberta and British Columbia, took the initiative in 2009 in an attempt to resolve the discrepancy in the numbers of visible minorities and Aboriginal Canadians entering the broadcast industry.

“The broadcast industry is about utilizing all of the talent possible,” emphasized Sherwood. “We want to ensure that our listeners and viewers have access to as many viewpoints as possible, and as such we’d like to engage as many minority groups as possible. We also want to ensure that we are doing our part to bring new people and new ideas into the broadcast field. By inviting and attracting people from all cultural and ethnic groups, we’re creating better relationships in every community.”