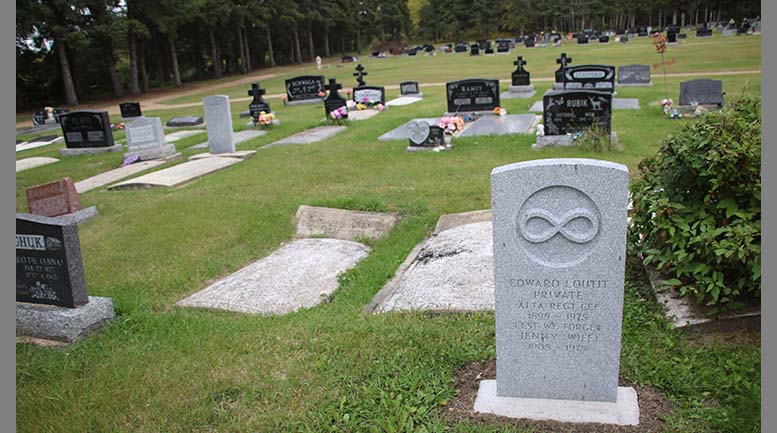 Shown above is the new military marker installed in September 2020 at Athabasca cemetery by the Last Post Fund under the Indigenous Veterans Initiative for Private Edward Loutit. The Metis symbol is now available as an option for new military markers. Photo by Glenn Miller

(ANNews) – Research done over the winter months by volunteer members of the Last Post Fund on unmarked Veterans graves has led to orders being placed for headstones that will be placed throughout the summer months and into the fall. The installation of an estimated 140 military markers in Alberta on previously unmarked Veterans graves is anticipated over the course of the next months.

“Our volunteers are looking forward to hosting a number of commemorative ceremonies in communities across Alberta as markers are installed during this summer and fall, as Covid conditions allow,” says Hans Brink, Alberta Branch President of the Last Post Fund.

The mission of the Last Post Fund is to ensure that no Veteran is denied a dignified funeral and burial, as well as a military gravestone, due to insufficient funds at time of death. In addition to delivering the Funeral and Burial Program on behalf of Veterans Affairs Canada, the Last Post Fund supports other initiatives aimed at commemorating Canadian Veterans.

These include the Unmarked Grave Program, through which the Last Post Fund provides military markers for eligible Veterans who have been deceased for over five years and lie in unmarked graves. Since the inception of this Program in 1996, the graves of 6,946 Veterans have been properly marked across the country. Last year alone, thanks to researchers 605 markers were installed under the Unmarked Grave Program.

Both services require research and community support from members of Indigenous communities throughout Canada. The LPF provides a list of Indigenous Veterans as a starting point for the research.

The program is gaining traction through awareness and has made several achievements since being launched in March 2019:  A summary to date would include:

At a recent ceremony in Swift Current, Saskatchewan in partnership with the local legion recognition was given to the installation of a number of new markers in a field of honour. Local Metis Elder Cecile Blanke was invited to attend. She presented Last Post Fund volunteer Glenn Miller her book Metis Veterans Monument and Lac Pelletier History Logbook. The first 4 pages contain pictures and short biographies of sixteen Metis veterans from the area.

Miller has begun researching where these veterans are buried across Canada and if they have a permanent marker. Initial findings have indicated WW2 veteran Elise Fayant who served in the Canadian Army Womens Corps. After the war she married Metis veteran John Rouzault. Both are buried together in Calgary. He has a foot marker, but her headstone has been removed over the years likely due to damage and remains unmarked. An application has been submitted by Miller to the Last Post Fund for her to have an upright military marker with the Metis symbol engraved. Another WW2 veteran Lloyd Trottier died in Whitefish Montana in 2004. Miller is working with the American veteran post to determine where he was buried.

A new Lost Veterans Initiative aims to support volunteer researchers for unmarked Veterans graves. As society has allowed people to work and live further from where they were born, many veterans are buried in other locations across Canada and elsewhere.

With Covid restrictions across the country easing, the Last Post Fund is requesting that Canadians visiting the gravesite of a departed loved one take note of any veteran unmarked graves they know of. The very last honour we can bestow upon these heroes is to recognize and record their service.

Click here to learn about other symbols designed by artist Jason Carter, that are now available for military headstones.

If you know of a Veteran in an unmarked grave for more than 5 years, you can help us ensure they receive a permanent marker to recognize their service, sacrifice and commitment by calling 1-800-465-7113 or visiting The Last Post Fund website for more information.

Glenn Miller is a volunteer with The Last Post Fund.