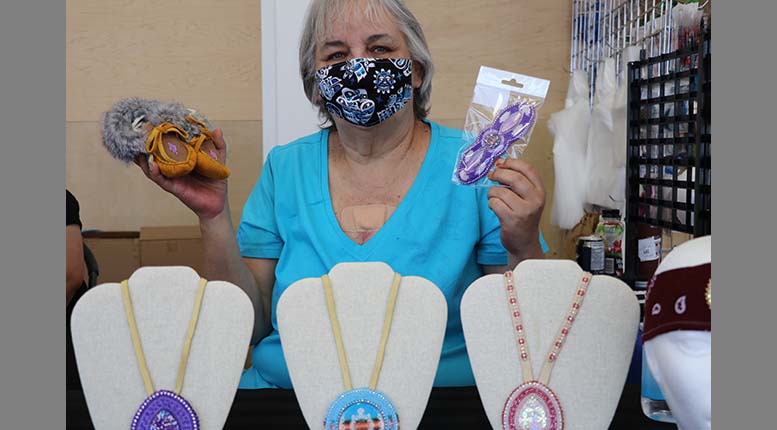 Indigenous artists and crafters showcase and sell their art on the second floor of the Edmonton Downtown Farmers Market on Saturdays and Sundays - as part of the "I am Collective." Photo by Terry Lusty

(ANNews) – The talented group of artists known as ‘I am Collective’ is gaining popularity in Edmonton and across Alberta. Located in the upper level of the Farmers Market (the old Army and Navy Store) at 97 Street and 103 Avenue in central Edmonton, it is gradually developing into a primary destination for people looking to purchase Indigenous arts and crafts.

The I am Collective rents space from the privately-owned market and each weekend it accommodates Indigenous proprietors with anywhere from two to fifteen sales booths. Of course, and especially given the economic downturn over the past year due to the Covid pandemic, the onsite market is a blessing for Indigenous crafters.

On the whole, the collective has about 60 members and continues to grow. While certain crafters set up just once or twice a month, others are there every weekend like clockwork.

In addition to their own products, some crafters also sell items for friends or relatives. Many of the business are a family affair wherein everyone contributes.

For example, Jamie Lynn Stewart, a Cree from Alexander First Nation, is assisted by her hubby and older son. She produces a number of household items such as oven mitts, place mats, towels, etc, in addition to face masks, shirts, shawls, sashes, mossbags and more. Her booth also sells those ever-popular Native-designed face masks. However, she’s quite proud of her oven mitts which, she explains, “have worldwide interest in such countries as the U.K., Germany, Japan, Australia and beyond.”

Much of her work incorporates Native patterns and images which adds to their popularity and gives their owners a sense of identity, “something to connect with,” she says. 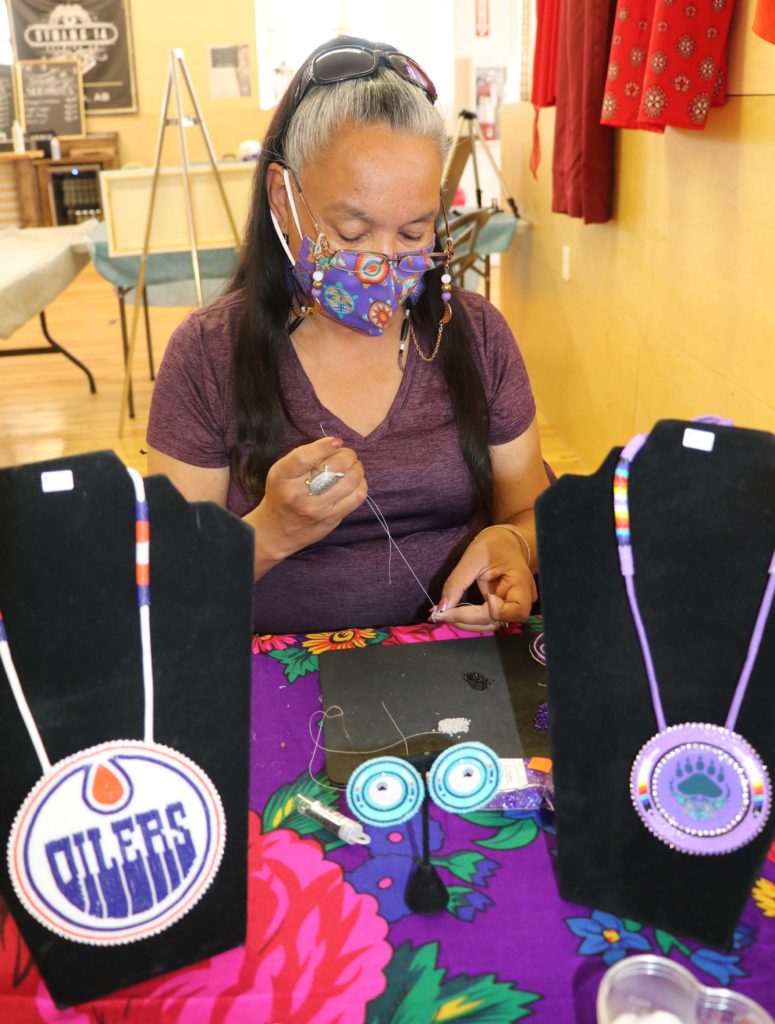 Then there’s Darlene Cardinal who produces some excellent and exacting beadcraft jewelry such as earrings (one of her best-selling items), necklaces, hair ties and so forth. She also produces orange shirts (to honour Residential School children) and red dresses (to honour Missing and Murdered Indigenous Women).

Known as “Lightning Fingers,” Cardinal can accommodate special custom orders for certain beaded products, such as beaded face masks. As an independent crafter her sales are her “sole source of revenue.” That, combined with her terrific beadwork and renowned artistry, is all the more reason to purchase her treasured work.

Now into his third year as an exhibitor is Tom Baril. The 22-year-old Metis who used to market a lot of his “moccasin photography,” has expanded his subject matter, which now includes trees, buildings and other configurations, landscapes, suns and moons, and more. Because his dad was into photography, it wasn’t unusual that Tom had an early introduction to the profession and he’s good at what he does. 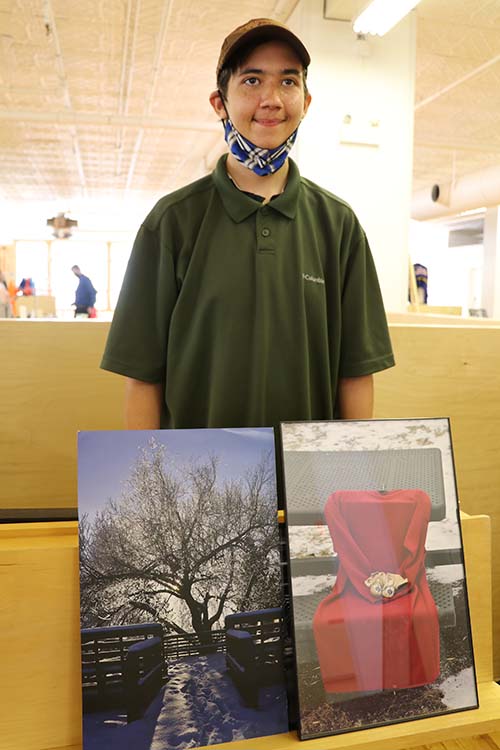 “I started when I was eleven,” he says. Now at 22, he really has evolved as is evident if you view his eye-catching imagery.

Be that as it may, Tom hopes to eventually follow his passion for cycling and wants to pursue a career as a bike technician.

Tina Brett is a well-known knitter and finger weaver whom many seek out for such items as Metis sashes and shawls as well as toques, mittens, leggings, and so on. She also produces those famous finger-woven sashes that the Metis were so well known for.

One additional feature at her booth is the work of her daughter, Bobbi, who is making her own mark in the area of flat art. Among the pieces she recently had on display was an image of Metis war hero, Tommy Prince from Manitoba who was one of the country’s most decorated soldiers. For anyone desiring a custom-made knitted or woven product, don’t hesitate to seek out Tina’s booth at the market. 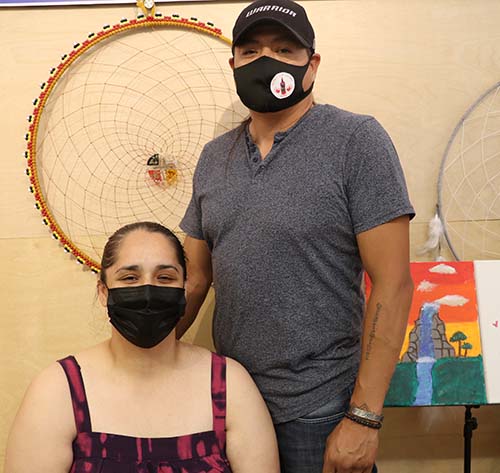 Covid has really put a spotlight on these types of health products, which really are a mainstay at her booth. Like Darlene, Sabrina is on-site pretty well every weekend.

These are but a few of the many Native crafters who are established artisans, but still constitute only several of the dozens who make up the I am Collective.

What about you? Are you in the market for a special gift for someone – maybe as a birthday, graduation, anniversary, wedding or Christmas gift? Or perhaps there’s something you’d like for yourself? After all, it’s okay to treat oneself every now and then.

Well, look no further. Amble on down to the 97th Street Farmers Market. Most of the Native crafts are on the second level.

If you wish to own a one-of-a-kind product or craft piece, and if you ever wanted to show true support for Indigenous products and artisans, then find your way to this market some weekend. That’s where you’ll find a variety of genuine, handcrafted items, many of which are unique and one-of-a-kind.

Finally, your purchase(s) will definitely assist the economic well-being of these talented Indigenous craft makers.