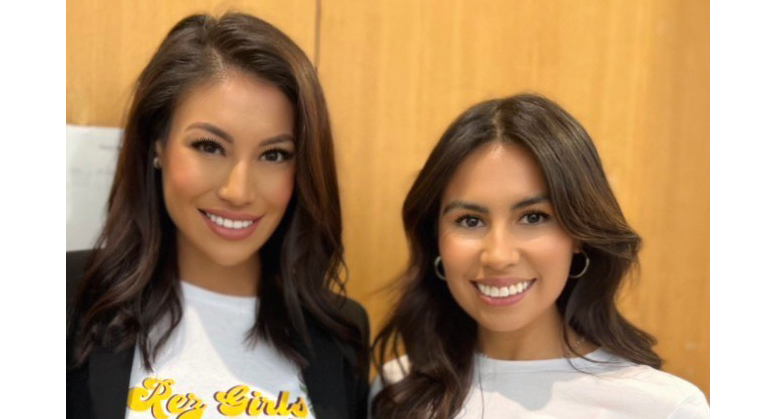 Former Mrs. Universe Ashely Callingbull gives some pointers to Lannie Houle as she competes for Miss Universe Canada. Vote for Lannie before May 12 to help support her journey.

It took 15 seconds of courage on Instagram for Lannie Houle to reach out to a former MRS. UNIVERSE for her life to change. Now the two have become so close as Lannie journeys through the Miss Universe Canada pageant process.

Instagram is Canada’s most popular social media site among millennials and gen z.

Lannie Houle is an Indigenous Plains Cree and Sylix Okanagan woman born and raised in Goodfish Lake, AB and Vernon, BC and she now resides in Kelowna, BC.  Lannie has followed Ashley Callingbull’s career and decided to take a chance, reach out on Instagram and ask if she could offer some suggestions in her preparation for the Miss Universe Canada competition.

Houle is an athlete who plays hockey and elite fastball. After running for Team Canada at the WIG, where she earned a silver medal and competing in multiple Nike races, Lannie enrolled at the Concordia University in Edmonton. She competed as part of the cross-country and indoor track team and later transferred to the University of Alberta.

Currently, Lannie is working with Spirit North, a national charitable organization that uses land-based activities to improve the health and well-being of Indigenous youth, empowering them to “become unstoppable in sport, school, and life.”

The transformative power of sport and play helps youth find the courage to take on any challenge and develop leadership skills, as well as improving their health and wellness, explains Lannie. This often leads to the discovery of new talents and limitless potential.

In land-based teaching for example, the primary sport might be cross country skiing. “So, we teach the youth how to cross country ski, and then we’ll go ice fishing in the wintertime. We also set snares; we’ll get elders to come in, make bannock, and tell stories,” added Houle.

Lannie is appreciative of her new relationship with Ashley. “We both didn’t have a perfect childhood,” she said. “So, it’s nice to relate to her about shared childhood experiences, knowing that you can overcome many things and help other people with their aspirations at the same time.”

“Of course, she’s been my inspiration from day one,” said Houle. Many coworkers encouraged Lannie to enter Miss Universe Canada and one day something clicked while she was looking at Callingbull’s pictures and videos.

“I saw a bit of myself in her. If she can do this, so can I. Then I learned more about her stories and the stuff that she’s overcome,” said Houle.

Through this process, Ashley has become more like an older sister, said Houle.  “I’ve never had an older sister. So it’s amazing to me that I have an Indigenous woman as a coach who’s also done Mrs. Universe; it’s just so incredible.”

“I saw Ashley do it before me, and that gave me confidence,” said Houle.

“It shows that Indigenous people are still here; we’re still thriving. We come from a bloodline of resilient, strong men and women; they’ll continue to pursue any dreams.”

Ashley Callingbull-Rabbit said, “I get messages from people to help out in different areas of their life,” and Lannie’s request really spoke to her.

When Houle reached out to her, Ashley offered to set up a zoom chat with her.

“There’s a lot of resilient and strong Indigenous women out there,” said Ashley. “But there are, I feel, a very select few women in the world that will be a real force to reckon with, and Lannie, has this drive and this determination that I’ve rarely seen in other pageant competitors.

“I think that comes from her being a professional athlete. She knows what it’s like to have that drive and be determined and put in the hard work.”

“What I have done to help Houle is provide some guidance and help find sponsorships to build up her confidence,” said Ashley.

“But in the end, it’s Lannie who is going to take herself all the way; it’s Lannie who’s going to be standing on the stage, and all we can do is, help her and support her, and everything that she’s done, up until this point. I am very, very impressed with her.”

As Indigenous women, we should never be competing against each other, and we should always be empowering and uplifting one another.

“Because Lannie is another sister to me. And all I want to do is amplify all my sisters’ voices, and you know, open the door for them so that when they walk into these spaces they are at their best,” said Ashley.

“Everything that we’re doing together, I hope encourages other Indigenous women to empower one another to help each other rise and always be the best versions of themselves,” said MRS. UNIVERSE!

Click here to vote for Lannie Houle for Miss Universe Canada Peoples Choice. The deadline is May 12.