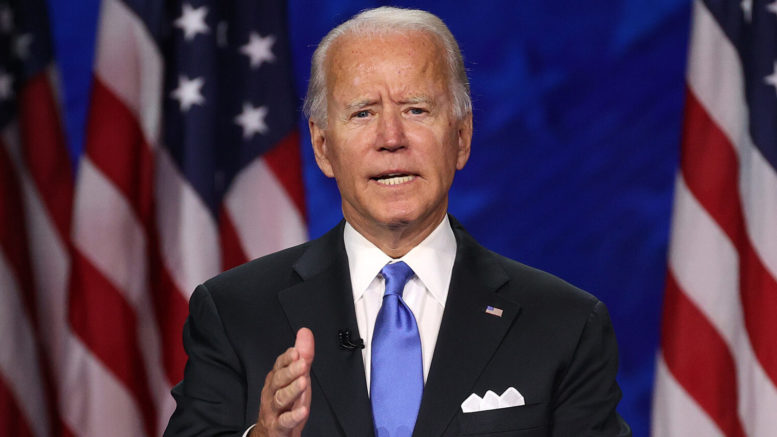 One of Joe Biden's first Executive Orders after being inaugurated as the 46th President of United States was to cancel the Keystone Pipeline as promised during his presidential campaign. (Photo by Win McNamee/Getty Images)

(ANNews) – Mere hours after being sworn into office, 46th U.S. president Joe Biden revoked the permit for the $8-billion Keystone pipeline via executive action. “I’m proud of today’s executive actions, and I’m going to start by keeping the promises I made to the American people,” Biden said from the Oval Office.

This decision, including re-entering the Paris climate accord, was made by Biden to tackle climate change.

Meanwhile, the Alberta government agreed last year to invest about $1.5 billion as equity in the project, plus billions more in loan guarantees.

“The leader of our closest ally retroactively vetoed approval for a pipeline that already exists and which is co-owned by a Canadian government, directly attacking, by far, the largest part of the Canada-U.S. trade relationship, which is our energy industry and exports,” he said.

The premier called on the Trudeau government to ask the U.S. to “sit down and discuss the decision.”

“If, however, the U.S. government refuses to open the door to a constructive and respectful dialogue about these issues, then it is clear that the government of Canada must impose meaningful trade and economic sanctions in response to defend our country’s vital economic interests,” he said.

Prime Minister Justin Trudeau also made a statement on the revoked permit, “While we welcome the President’s commitment to fight climate change, we are disappointed but acknowledge the President’s decision to fulfill his election campaign promise on Keystone XL,” he said.

“Workers in Alberta, Saskatchewan, and across Canada will always have our support,” the statement read. “Canada is the single-largest supplier of energy to the United States, contributing to U.S. energy security and economic competitiveness, and supporting thousands of jobs on both sides of the border.”

“I look forward to working with President Biden to reduce pollution, combat climate change, fight COVID-19, create middle class jobs, and build back better by supporting a sustainable economic recovery for everyone.”

The project – previously approved by TC Energy – would see the 1,930-kilometre pipeline transport up to 830,000 barrels of oil a day from Alberta to Nebraska.

While it’s clear that Biden has thrown a wrench into the Federal and Provincial Government’s plans, they are not the only ones affected as First Nations from Alberta and Saskatchewan have also promised to invest money into the Keystone pipeline.

An Indigenous partnership with TC-Energy was made through a separate entity known as Natural Law Energy (NLE), which is a coalition/alliance made between Indigenous Nations to “pursue economic opportunities for the wealth and benefit of Indigenous Peoples,” says NLE.

The Indigenous Coalition is made up of Maskwacis Nations: Ermineskin Cree Nation, Montana First Nation, and Louis Bull Tribe; as well as Saddle Lake Cree Nation and Nekaneet First Nation.

In now-unavailable documents, NLE announced that they supported and signed a Memorandum of Understanding (MOU) with TC-Energy, in a move the Coalition described as a “historic agreement for First Nations within Treaty No. 4 and Treaty No. 6.”

The TC-Energy partnership would have allowed NLE to make an investment upwards of $1 Billion dollars. It also would have meant a stake in the pipeline for the First Nations involved – approximately 12 per-cent ownership.

According to Natural Law Energy CEO Travis Meguinis, the deal was one of the largest ever for First Nations. “We’re a major contributor to economic developments on our traditional lands and will create opportunities for future generations.”

It is important to note that the $1 Billion dollars was dependent on NLE securing financing for the investment and at the time of writing, no news of the coalition securing funding has been heard.

Support for the Keystone pipeline has been mixed among Indigenous Nations. For example, the partnership was a source of contention in Saddle Lake Cree Nation.

On October 8, 2020 a protest was held outside of the Saddle Lake Band office as part of an on-going power struggle between Saddle Lake Chief Eric Shirt and the Council members.

The protest – which was attended by many council members – was addressing what many believed to be lack of transparency, financial accountability, and governance exhibited by the Shirt administration.

In response to this protest, Eric Shirt released a letter addressed to the Saddle Lake people which said, “Since being elected, I have tried my hardest to make the changes I promised during my campaign, like improving transparency and eliminating corruption. At every turn, a quorum of Council has opposed me,” wrote the Chief.

As for how this letter involves the Keystone Pipeline, Chief Shirt stated that one of the grievances from the protesters was lack of transparency, specifically on a little deal Shirt and other Nations made in partnership with TC-energy.

Shirt claims that he was not the only Saddle Lake Government official to sign-off on the pipeline, but that is for another story.

It is unclear what will happen with the pipeline, as this is not the first time it has been cancelled, but work has been suspended. In a statement by TC Energy, the company said it was disappointed in Biden’s decision and warned it would lead to the layoffs of thousands of unionized workers.

“TC Energy will review the decision, assess its implications and consider its options,” the statement reads. “However, as a result of the expected revocation of the presidential permit, advancement of the project will be suspended.”