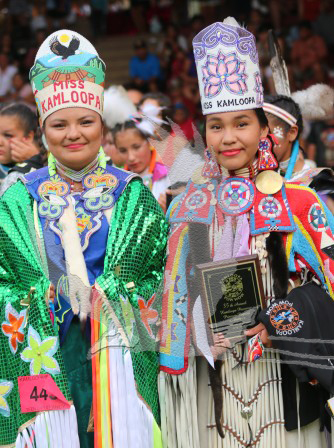 Hot! Hot! Hot! There is no other way to describe it. That was the 35th annual Kamloopa Powwow. Day One got to +38; Days Two and Three also hit the mid-30s.

It was definitely a time to drink lots of water, seek a spot of shade and not be overly active. One couldn’t help but empathize and feel for the hundreds of powwow dancers at what is one of Canada’s best powwows.

Despite the intense heat, participants, dancers and visitors turned out in droves to be a part of the action and to show their support for a powwow that rakes in dancers and drummers from throughout North America and visitors from distant points like China, Germany, Japan, northern Europe and Central America. Considered one of the larger powwows, it usually draws an estimated 15 to 20 thousand visitors with 500 or more dancers and 15 to 20 drum groups. 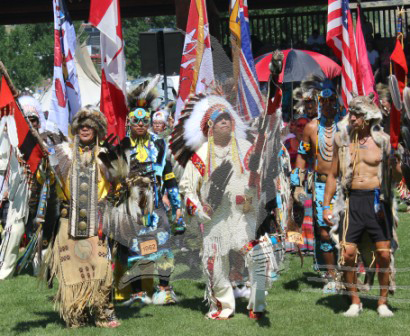 The Grand Entry at the Kamloopa Powwow.  Article and photos by Terry Lusty

Chief Shane Gottfriedson claims it’s one of the most popular, go-to powwows that attracts the world’s best dancers with attractive payouts of over $77,000. Its beautiful red cedar arbor, built in 1994 is believed to be one of the country’s very best.

Home to the TK’emlups te Secwepemc (Shuswap Band), the powwow has a broad range of Native craft booths but limited food stands, some of which often experience long lineups that are a bit irksome.

But overall, the powwow is wonderful and participants enjoy coming back year after year. This year’s emcees were Stan Isadore from Driftpile, Alberta and Russell Red Crow from Standoff, also in Alberta. Dale Alexis was the Arena Director, Kacey Nicholson the whipman and Brandon Daniels the Head Judge.

A brief three weeks prior to the powwow, communities were saddened to hear of the loss of veteran drum maker, Harold Dale Isaac who moved on to Great Sky Country on July 10 at the age of 61. Isaac was a regular seller of his hand drums at the annual Kamloopa powwows. He was a member of the Lusilyoo Clan at Ft. St. James in northern B.C. His hand-crafted drums were highly sought out by many drummers/singers and he’ll be well remembered by those who knew him. 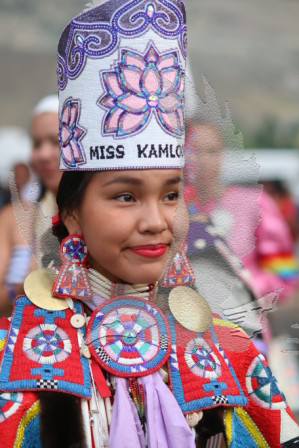 Contestants are judged and awarded 20 points for each of five categories – regalia, dance, speech, talent and poise/appearance. plus 100 points for every 100 fifty-fifty tickets they sell. In the end, the new Princess was another Alberta girl in the person of Chiquita Bird-Mackinaw who is from Maskwacis and Paul First Nations in Alberta. Bird-Mackinaw is a fifteen year old traditional dancer who was initiated into the powwow circle when she was four. She is currently enrolled at Amiskwaciy Academy in Edmonton. She is going into Gr. 11, plans to complete Gr. X11 and then  enter the Marines, something she has desired for some years now.

“I hope that everyone learns our traditions, our culture and our language to carry on to the next generation,” Bird-Mackinaw said in her speech while being judged as a contestant for the 2014 Princess crown. She stated her belief in the power of education and that there are many doors of opportunity out there for people.

Ever since she was young, she’s wanted to be a Marine and told her mom that she hopes that she can achieve her goal by continuing in school.

“I dance for the people and everyone who can’t dance,” said Chiquita. “And, I dance for the Elders mostly.” She also mentioned the recent passing of her late father and claimed that on this particular day, “he is watching me dance.”

In the talent category, the newly crowned Kamloopa Princess played flute, saying she was inspired by Amanda Woodward, an Edmonton-based flute player.

Be the first to comment on "Kamloopa Powwow celebrates 35th Anniversary"