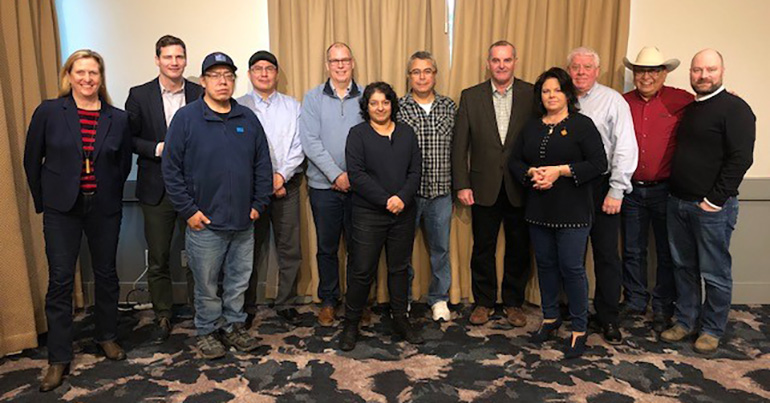 Senior representatives of the CER, TMC, and the Indigenous Caucus, facilitated by Natural Resources Canada, began meeting in September 2019, to co-develop improvements to Indigenous monitoring of the Trans Mountain Expansion Project. (Credit: IPO-W)

Earlier this year, leaders from all three organizations endorsed the initiative, which is aimed at identifying opportunities to improve TMC’s and the IAMC-TMX’s respective Indigenous monitoring programs for the Trans Mountain Expansion Project (Project).

“This agreement represents how we are fundamentally transforming the way the CER works to advance reconciliation with Indigenous Peoples,” says CER Acting-CEO Sandy Lapointe.

“Collaborating with the IAMC-TMX and Trans Mountain is helping us develop best practices in Indigenous monitoring and will inform how we approach and expand Indigenous inclusion in oversight for all future projects.”

These program discussions are even more critical in light of the COVID-19 pandemic where the CER, Fisheries and Oceans Canada (DFO), Parks Canada, and IAMC-TMX are finding innovative ways to continue to provide regulatory oversight.

“In-field inspections are still being performed, and work is ongoing to ensure Indigenous monitors and federal staff can conduct inspections safely, consistent with public and occupational health requirements,” says Lapointe.

By learning more about the unique objectives and strengths of each other’s programs, the three parties found common ground and developed a shared goal: to ensure the Project is built safely, in full regulatory compliance, with Indigenous participation in oversight, and with minimal harm to the environment and Indigenous interests.

“Through this new initiative, we are seeking to better ensure the knowledge, values, and perspectives of Indigenous communities are respected and incorporated into how the Project is built, with the overall aim of advancing Indigenous interests in the oversight of the Project,” says Councillor Wilsdon.

“The relationships that we’ve developed will help all parties manage issues that might arise during construction.”

The early results of this work will improve the Indigenous monitoring programs by:

The co-development initiative between the three organizations began in September 2019, when the CER requested Trans Mountain to collaborate with the IAMC-TMX outside of the regulatory process to assess and explore improvements to Indigenous monitoring programs.

Pressure mounts between the provinces over the Trans Mountain Pipeline Expansion