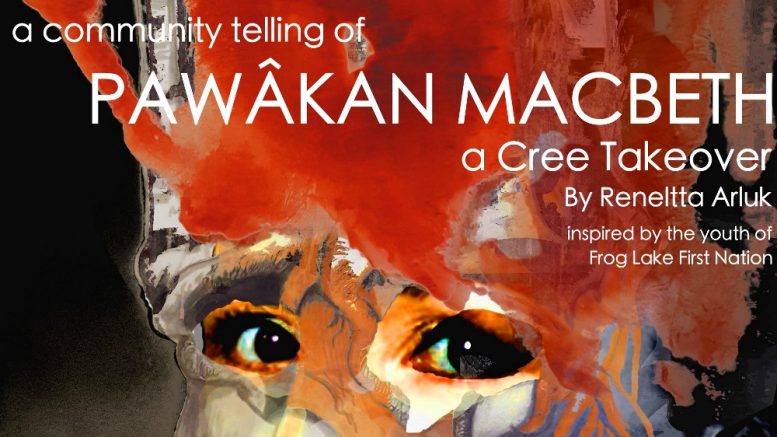 (March 02, 2020) – Join us for a Community Telling of PAWÂKAN MACBETH.
A Cree Takeover by Reneltta Arluk • Inspired by the youth of Frog Lake First Nation

This take over by Indigenous playwright Reneltta Arluk, sets Pawâkan Macbeth in Cree territory in 1870s Alberta, with the cannibal spirit, Wihtiko. 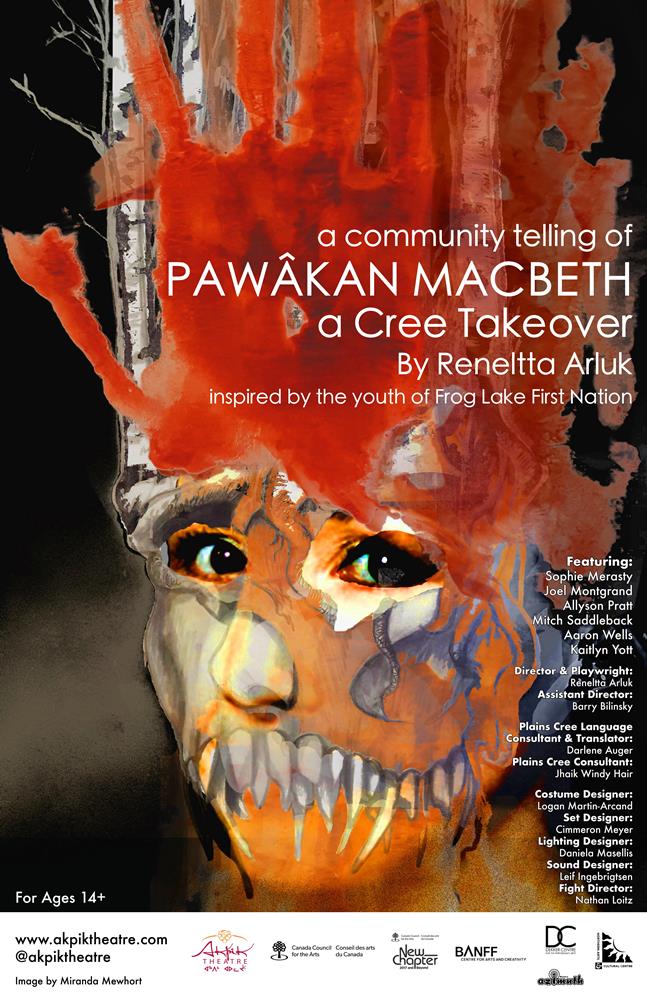 Pawâkan Macbeth happens before the numbered Treaties were signed, when Plains Cree were allied with Stoney Nakoda, and at war with Blackfoot over territory, food, supplies and trade. The Canadian Government were making their way west with Sir John A. MacDonald as its leader. Harsh environments brought immense fear, starvation, and uncertainty together to awaken the darkest of Cree spirits, the Wihtiko – a being with an insatiable greed. Through the exploration of Cree language, history, stories and cosmology Arluk asks, What is it to be human? What makes a human vulnerable to the Wihtiko? Inspired by working with the youth of Frog Lake First Nation, and shared stories from Elders in the Treaty 6 region, Arluk has created a terrifying journey through love, greed, honour and betrayal, with coyote howlers teaching us that resurgence requires balance.

Pawâkan Macbeth is a full length play commissioned by The Stratford Festival. This community telling of Pawâkan Macbeth embarks on a 2020 tour of Treaty 6 territory, bringing professional theatre into Indigenous communities – for the first time.

“First Nations schools in Alberta are required to learn Shakespeare as part of their English curriculum. The inspiration of taking over Macbeth was to offer Indigenous youth a First Nations perspective of the play that lessens the language barrier and heightens the story. Bringing Pawâkan Macbeth to Indigenous communities centralizes the story around them. A community telling of Pawâkan Macbeth connects to the story with land and all it inspires,” says Arluk.

Pawâkan Macbeth then embarks on a two week tour of the Northwest Territories from March 31 to April 11, in partnership with the Northern Arts & Cultural Centre: