(ANNews) – The Institute for the Advancement of Aboriginal Women (IAAW) will host the 2017 Indigenous Women’s Justice Forum on October 3rd and 4th to create an opportunity for Indigenous women, government and institutional leaders to discuss changes needed to the justice system for improved outcomes for Indigenous women.

“Those who attend the conference,” noted IAAW CEO, Rachelle Venne, “will explore what is happening to/for Indigenous women in the courtroom, the correctional system, within policing services and in the home communities. Through facilitated workshops and table discussions, we will plan what to do in our families, communities, and institutions.” Register at www.eply.com/JusticeForum2003423

Together with women who will share their stories at the conference, the IAAW and community partners, guest speakers, researchers, and government leaders will present a variety of information that will help participants form a series of creative, positive and collaborative recommendations for the IAAW to lead, co-lead, or present throughout the coming year.

“We recently partnered with the Women’s Legal Education and Action Fund (LEAF) and have worked together on 3 recent court cases,” explained Venne, noting that the Partnership has been granted Intervenor status in the Cindy Gladue/Bradley Barton appeals case. 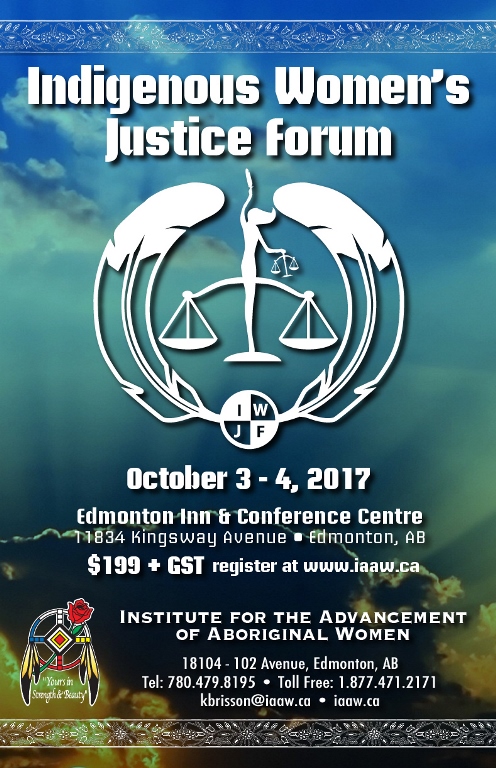 An Ontario truck driver, Barton was acquitted by a jury of his peers in 2015 of the 2014 death of Cindy Gladue, a decision that the Alberta Court of Appeals quickly rejected. The three-panel Justice was harshly critical of Judge Robert Graesser and the long list of mistakes that he made in his charge to the jury. The Appeals Court decision, rendered by Alberta Chief Justice Catherine Frazer, noted that “despite efforts to thwart them, myths and stereotypes continue to stalk the halls of justice in cases involving sexual offences, enabled sometimes by inadequate jury charges.”

Venne noted that the Justice Forum would also be looking at the ruling by the Canadian Judicial Council that saw Federal Court Justice Robin Camp removed from the bench, and at the case involving “Angela Cardinal, a sexual assault victim who was held in jail for four days to ensure she was available to testify.”

The forum gets underway with an overview of these three cases to explore what changes are required and an opening panel to share what is happening from their perspective.

In breakout workshops following the panel, participants will explore what is the first stop into the justice system, such as family violence and on-line predators. Then the second series of workshops discuss what kind of information and tools can be shared that will help those who are trying to navigate the justice system themselves or have a family member or friend that needs help to prepare.

The second day of the forum includes women sharing their experiences and participating in a discussion that asks the question: What can we do to prepare our young women and girls? This will be followed by an action-planning session and conversation about what participating individuals learned at the forum and what they can each take home with them.

During the last several years, explained Venne, “the IAAW has supported and held many demonstrations, walks and meetings to create awareness of the disproportionate numbers of Indigenous women involved with the justice system and discuss ways to improve outcomes. We work collaboratively with police, government, educational institutions, other organizations to lead positive change. Most importantly we bring together Indigenous women who are strong, resilient and knowledgeable to implement women-led initiatives in many Alberta communities.

“This Indigenous Women’s Justice Forum provides an opportunity for the participants to learn and to share their experiences. Talking together and working together we will come up with solutions and recommendations that we can work with as we move forward.”

The IAAW is a non-profit organization with a head office in Edmonton with outreach to several chapter communities in the province. Established in Alberta’s capital in 1995 as a non-profit society, IAAW has continued to grow over the years and currently offers specialized services for Indigenous women including after-crisis supports that build confidence and foster independence.

The IAAW recognizes the significant role Indigenous women hold in the community and seek ways to include them in the decisions.

For more information about the IAAW visit iaaw.ca.

Be the first to comment on "IAAW to host Indigenous Women’s Justice Forum: October 3 & 4"