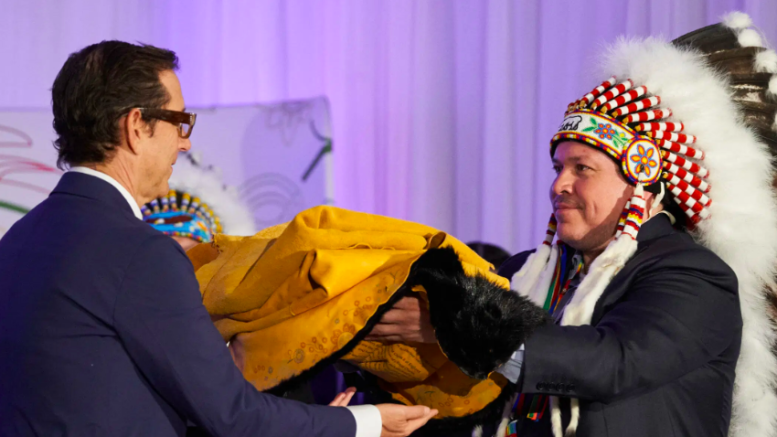 (ANNews) – On April 22, 2022 the Hudson’s Bay Company announced that it had transferred ownership of its Downtown Winnipeg heritage building to the Southern Chiefs’ Organization (SCO), who have a “visionary” plan for the future of the site.

The SCO have announced that they will renovate the building to include hundreds of affordable housing units for families and students, a portion of which will be designated as culturally safe assisted living units for First Nations elders.

Furthermore, the organization will be creating a museum and a living art gallery, in addition to two restaurants. A health and healing centre is also being added to the building.

The $130 million project has been designated as the Wehwehneh Bahgahkinahgohn, or ‘it is visible.’

On top of everything already mentioned, the newly-renovated building will include a place of reflection to honour residential and day school survivors and children.

Grand Chief Jerry Daniels said of the transfer, “Many of our leaders and communities embrace a holistic approach to economic development — an approach in which the primary value of development is in providing a means to reinvest in the community for the benefit of all.”

“Today can be another step toward that brighter vision, where we can work together on building the future our ancestors dreamed of – one with hope and opportunity for all.”

The building will also serve as the future governance house for the SCO, which represents 34 Anishinaabe and Dakota Nations in Southern Manitoba, and more than 81,000 First Nation citizens — which equals approximately 10 percent of all First Nation people in Canada.

The building was reportedly exchanged for two beaver pelts and one elk hide, which was to be sent to the governor and executive chairman of the HBC, Richard Baker.

The payment was primarily meant to be symbolic, as the site had been valued at $0 due to the estimated renovation and maintenance costs.

“As we considered the future for the Winnipeg building, it was important to ensure a sustainable plan for the site that also had meaningful purpose for the city of Winnipeg,” said Baker.

“HBC’s Truth and Reconciliation journey requires actions that demonstrate our commitment to moving forward together with Indigenous communities. We believe SCO is the right steward for this location, and can create a new community landmark that will help advance reconciliation.”

The six-storey building, located in downtown Winnipeg, opened in 1926 and served as the Company’s flagship store in western Canada until it was designated as an historic structure in 2019 and closed in 2020.

Both the SCO and the HBC have emphasized the social and economic opportunity of the renovations, claiming that there are over a million working hours in the construction phase alone.

Grand Chief Daniels concluded his statement by saying, “This project represents SCO’s bold vision of what the future can hold. It can be a new world of hope and possibility, filled with place and space for our people to come together, to grow, create, and lead.”

“A place for us to connect with people who come from across Turtle Island. A place for us to stand together in unity, speaking with one voice, proud of who we are. This is the vision of our ancestors.”