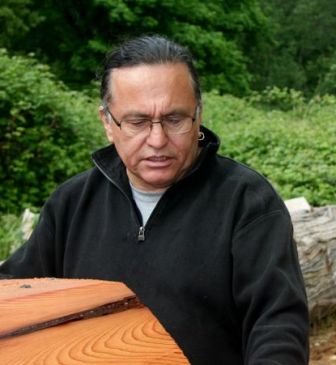 Edmonton, Alberta –  It is a rare chance to see a northwest totem pole brought into the heart of Alberta’s capital city.

The historic carving will serve as a permanent symbol of cross-border unity among First Nations and Tribes opposing destructive fossil fuel projects like the proposed Kinder Morgan pipeline and tanker expansion project. The totem pole journey brings its message about our shared responsibility to protect our water, lands and people, and invites community members to be a part of the totem’s journey.

Carved by Lummi Nation master carver Jewell James, the colourful totem pole will be stopping at the Alberta Legislature in downtown Edmonton on September 5, 2014 at 10 am. Nearing the end of a 10,000 kilometre journey that has taken it through South Dakota, Montana, Washington, British Columbia and now, Alberta, the totem’s final destination will be the Beaver Lake Cree First Nation (BLCN) whose territory is affected by the expansion of the Alberta tar sands.

Children and families are invited to interact with the pole and take pictures with it.

Be the first to comment on "Historic Totem arrives in Edmonton Sept. 5: in opposition to Kinder Morgan pipeline"