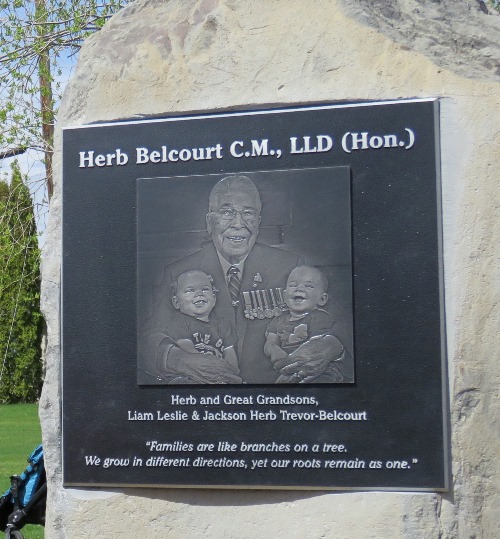 (ANNews) – In early January well known Métis Elder, community leader and former entrepreneur, Herb Belcourt, now 85 and retired, was diagnosed with terminal cancer; the prognosis gave him about a month to live. Nearly five months have passed since that day and though Herb has slowed his pace a little, he remains active, progressive and hopeful.

“Well, I am very happy to say that the early prediction was wrong,” noted the guest of honour, smiling as he sat next to a newly unveiled plaque on the corner of Sherwood Drive and Oak Street in his home community of Sherwood Park. The rugged stone fixture, complete with a mounted bronze plaque, was placed at the head of Herb Belcourt Park, an honour bestowed upon him by Strathcona County and Sherwood Park in appreciation for Herb’s many years of service and contributions to the community.

In a moment of jest, Herb drew a roar of laughter when he told the gathering that “originally the county had planned to name a road after me, but I didn’t really want that – I’ve been rolled over before. But, seriously, I’d really like to thank the county, the city, the committee, the community and everyone who has contributed in some way to make this day possible.”

The official unveiling took place on May 10. Herb was joined by his wife, Lesley, and a host of family members, friends, and supporters who came by to share a few minutes with their friend and neighbour. The crowd was dotted in red surge and police blue as local constabulary gathered to salute Herb Belcourt for his many years of service, not only to the region but also to the policing community.  Herb became a member of the Order of Canada in 2010 and until 2013 was an Aboriginal Advisor to the Commanding Officer at “K” Division for the RCMP. 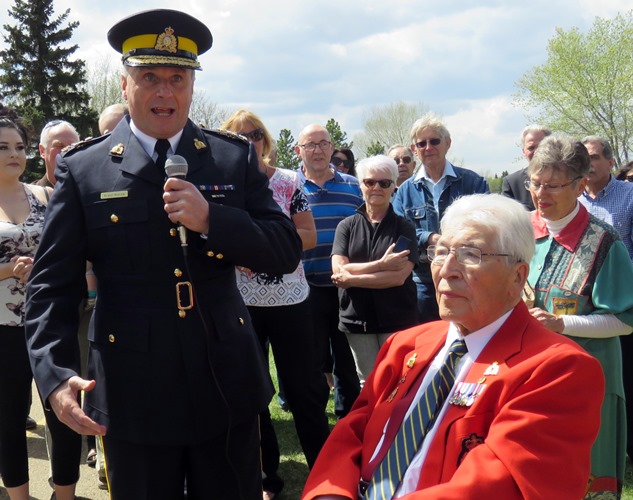 Alberta’s new RCMP Commander, Todd Shean thanked Herb for his many years of service and dedication.

Before retiring after 35 years of service earlier this year, former RCMP Deputy Commissioner Marianne Ryan, presented Dr. Belcourt with a commendation and stated: “In addition to being a role model to all Canadians Dr. Belcourt’s contribution to the Royal Canadian Mounted Police in this province exemplifies the highest level of leadership and commitment to public service.”

Among those attending the unveiling ceremony was the newly appointed Commanding Officer for the RCMP in Alberta, Assistant Commissioner, Todd Shean.

He thanked Dr. Belcourt for his “many years as an ambassador” to the Commanding Officer. He also committed to visiting with Herb to “seek your advice and your guidance as I assume my new role as commander of K Division.”

Edmonton Police Service Superintendent Greg Preston was one of several EPS members to join the gathering at the newly named park. His memories go back to the mid-1980’s. 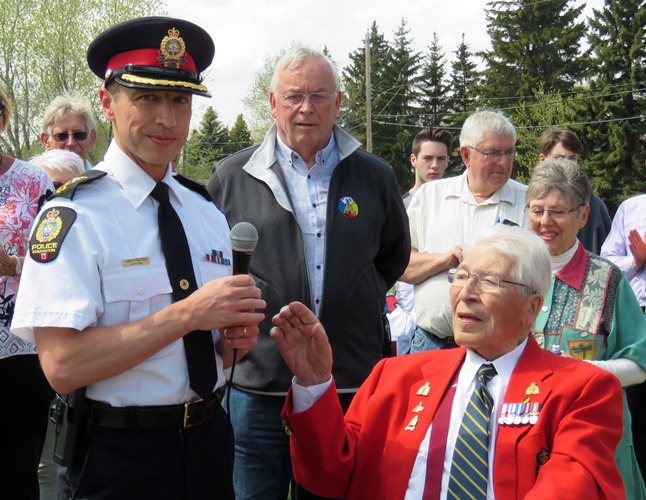 “I grew up in Sherwood Park and my family has made it their home. I remember the days of the movie theatre and it brings back some very good memories. You are a wonderful man and I want to thank you for everything you’ve done for the community.”

Preston was referring to the Sword and Shield movie theatre, a venture that Dr. Belcourt brought to Sherwood Park in 1984; readers can learn more about that intriguing adventure in Herb’s 2006 book, “Walking in the Woods: A Métis Journey.”.

When the RCMP cover was removed from the newly erected honour stone a beautiful image appeared. It was Herb Belcourt, sitting with his two young and smiling great grandsons, Liam and Jackson, perched on his lap. The moment brought cheers of joy from the gathering while Lesley’s eyes glassed over and a tear flowed from Herb’s eyes. 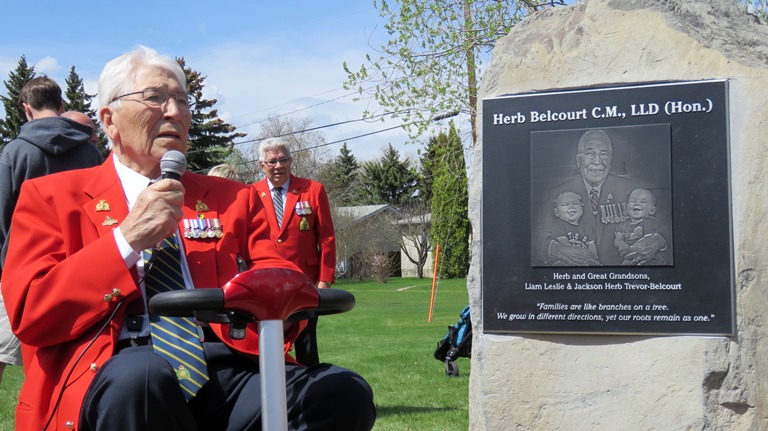 The new plaque honours Herb Belcourt with an image of Herb and his two grandsons.

“My beautiful grandchildren,” he said quietly. “I love them so much and I am so very proud of them, as anyone here would be if they have great grandchildren.” Later he added, “Maybe one day when they are teenagers they might bring their friends here and let them know how proud they are of their grandfather.”

In closing he noted how proud he was to have “so many friends and family, including all those here in red (RCMP) today; you are also a part of my family and I am honoured to have been able to work alongside all of you.”

Herb was overjoyed with the unveiling ceremony and moved by the words he heard from every person who rose to speak.

First cousin and business partner, Orval Belcourt said that the two had shared a close working relationship together since 1969.

“Since Herb first moved to Sherwood Park in 1971 he’s been an instrumental member of the community,” he noted. “It is gratifying to see that Sherwood Park has recognized his contributions to the county and to the Edmonton area as a whole.” 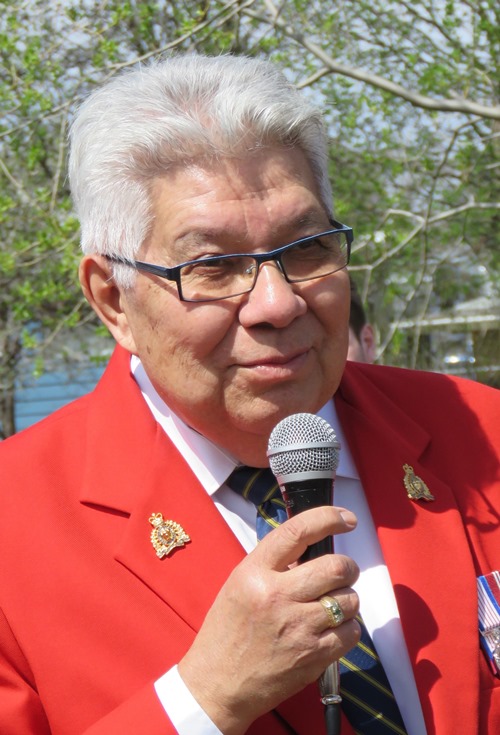 Longtime friend Roy Louis, Chair of the Buffalo Nations Luxton Museum and a prominent member of the Samson Cree community said, “This is a grand day for you and your family Herb and I am happy that you are here to see it all. I’d like to take this time to thank you for everything you’ve done over the years for your community, your province and for all Canadians. Herb and I have sat on some of the same boards over the years and I’m proud to have worked with him and to see the positive difference he’s made in the lives of so many people.”

Louis is a former president of the Indian Association of Alberta, a Queen’s diamond jubilee medal recipient. In December 2013, he was the recipient of a life time achievement award from the Alberta Aboriginal Role Models initiative.

John Vrolijk has known Herb for more than 40 years and he told the gathering that “Herb has done so much for the county, the province and the country that it would take us all afternoon to go through his many accomplishments. I’m proud to call you my friend, Herb and though I realize just how much you have already accomplished, I also realize that you are not done yet.”

The final comments came from Sherwood Park Councillor Lytton Delaney who congratulated and thanked Herb for his many years of service to the community and expressed the gratitude felt by Strathcona’s mayor and council.

“It’s an absolute privilege to be here this afternoon on behalf of Herb and his family and the wonderful work he’s done in the community all these years. Because of you and the work you’ve done Herb, Sherwood Park is a better place today.” 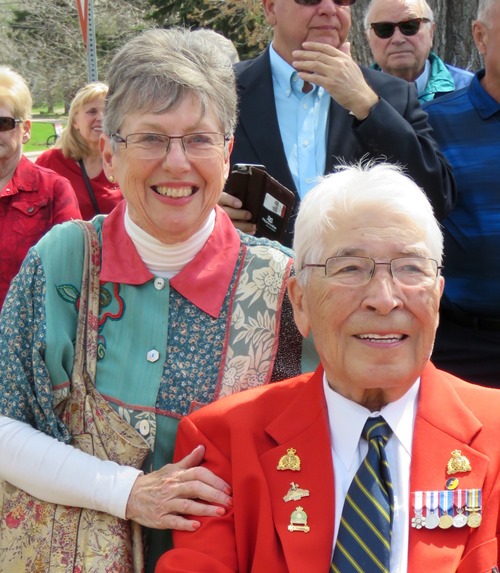 Herb and Lesley Belcourt participate in the unveiling ceremony at Herb Belcourt Park.

Lesley told the gathering well-wishers that “our family thanks you most heartedly for coming out today; we are both gratified by your support and well wishes, not just here now but for the last few months. Four months ago, Herb was diagnosed as having a month to live; that diagnosis was wrong and we are so fortunate to have this wonderful extended time together – to have seen so many friends come to visit with Herb, to talk with him, share coffee with him and put his mind at ease in these trying times.”

In a conversation at his home and away from the crowds Herb confided that he still has one mission he’d like to see fulfilled.

“It’s just a vision,” he noted, “but it’s one that I have had for many years now. I’d like to see the creation of a unique, holistic healing centre for women – a recovery facility complete with all the professionals needed on site and close by. I call my vision, Healing Waters because if it becomes a reality I’d like to see the facility built at Métis Crossing, close to the river and near the old church.”

In fact, several years ago Herb was hopeful that he’d be able to purchase a piece of land owned by Roz Shepherd near the shores of Lac St. Anne but the deal fell through. 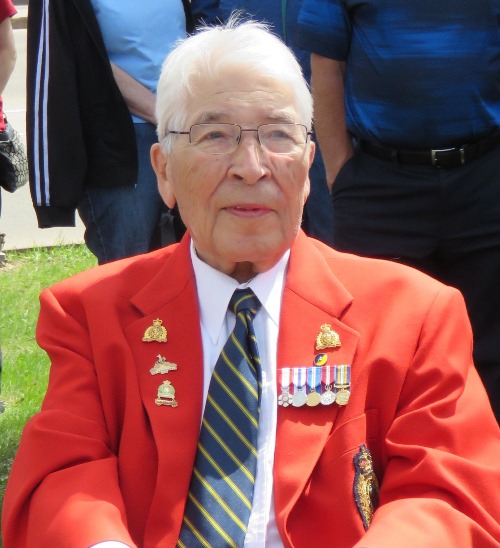 “That idea didn’t work out, but the desire remains strong and though I may not be able to see it done myself, I am hopeful that someone will step up and take over where I’ve left off,” he emphasized. “I’ve planted some seeds and created some dialogue with MNA President Audrey Poitras and several government entities, including Alberta Health. It will be an expensive process because it will be a fully equipped centre with a full array of services for women who want to break away from abusive partners or rid themselves of drug and alcohol addictions. It would have a full-time psychologist, psychiatrist, nursing staff and in essence access to all of the professionals required to maximize success.”

He chose Métis Crossing “because it is a 550-acre parcel of land owned by the Métis people of Alberta. It is a quiet place with a restful atmosphere and lots of room to stretch your legs and grow your mind.”

Canative Housing, a corporation once owned by Herb Belcourt and his partners, Orval Belcourt and Georges Brosseau, donated the land to the Métis people of Alberta in 2001.

“I’d like to see a small 20 or 30 acre parcel of land utilized for the site,” he added. “My vision is to see flowers, a garden area and root cellar to store the food and trails for the staff and clients to walk on. If built it would include all of the amenities and provide a safe and secure place where people, especially clients, would feel comfortable and be able to focus on healing their bodies and their minds.”

Herb said he’s already spoken with the MNA president and she is willing to “do what she can to help ensure that the project can get underway sometime” down the road.

In the meantime, Herb and Lesley Belcourt have a smaller vision and a different goal.

“We’d like to be able to celebrate our 44th wedding anniversary together,” noted Lesley, “and that will take place on June 30.” 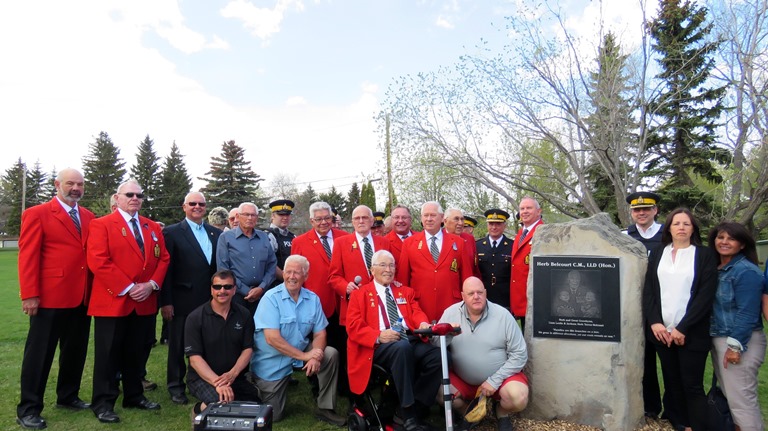 Current and former RCMP and EPS members joined Herb to celebrate the official unveiling of the new park-naming plaque.