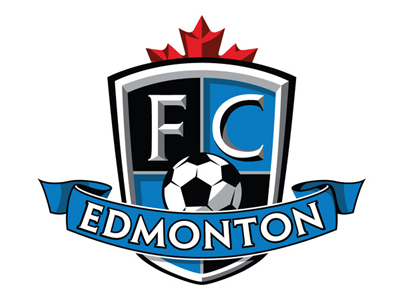 Thanks largely to a fundraising campaign by SIRENS the Charity and FC Edmonton (pro football club), 15 year-old Edmontonian, Kobe Blyan, is off and running. Literally.

In the presence of supportive classmates, the two organizations surprised him on February 18 by presenting him with a birthday cake and a larger-than-life cheque donated by the Kevin Lowe Must Go group. It didn’t stop there.

Rod Proudfoot, the general manager of the professional FC Edmonton club gifted Blyan with an FC team jersey and a framed certificate acknowledging him as one of the club’s ‘honourary ball boys’ for the coming season.

“We think these kind of young leaders need role models,” stated Proudfoot. To him, Blyan is an “extraordinary player” who deserves a shot.

The cheque to SIRENS is but one fundraising initiative to help cover the $1,350 fee Blyan requires for his trip to Vancouver in mid-April where he will be on-site to watch and learn from pro-soccer teams when the Vancouver Whitecaps take on the L.A. Galaxy.

During his one week visit, in the company of other young, aspiring soccer dreamers, Blyan will be 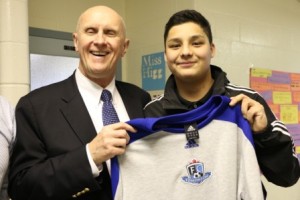 mentored by the Whitecap coaches who will run training sessions with the students. Blyan will get to play competitively and receive valuable advice from experienced professionals.

The young Grade 9 St. Nicholas Junior High Catholic School student will get to live his dream because he dared to dream. Over the past two-and-a-half years, he set standards for himself and now he is seeing the fruits of his labour.

But, it wasn’t always that way.

When Blyan first entered St. Nicholas, in September of 2011, he was a “shy, removed and timid young boy,” explained his soccer coach, Marco Bossio.

Within a couple of months Blyan’s abilities at soccer showed through. Coach Bossio definitely saw “promise” in him and took the rising star under his wing, working diligently to mold him into a skilled player.

Bossio stated, “We recognized he had something . . . he just took off!”

In fact, last fall Blyan played an instrumental role in taking the St. Nicholas Soccer Academy school team to the city premier championship by routing the St. Edmond school team in a 3 – 0 shut-out.

The early transition worked wonders on Blyan socially as well. “The program helped bring him out of his shell,” said Bossio.

“At the beginning he lacked confidence, but he developed into a mature student.”

Blyan’s legal guardian and grandmother, Janet, is extremely proud of him. When he was still very small, she explained, he would follow his older brother Jeffery, around with his soccer ball. As he got older, he developed to a point where he “got better than him,” she stated.

Though Bossio admits Blyan aspires to one day be a pro, he recognizes what a monumental task he is facing.

“It’s highly unlikely,” he stated adding that there is only “a one or two percent chance of anyone making the pros.”

As a model player Blyan reminds him of a former student, Jackson Farmer, who went pro with the Whitecaps and is now on loan to South Carolina.

With Blyan, he explained, “The success story is more about how far he’s come and where he’s at now. It’s not always about making it to pro.”

Whether its NHL, NFL, pro basketball or some other major league sport, the odds are certainly not in one’s favour.

Nonetheless, Bossio can’t help but commend Blyan’s strengths. “He is technically sound at trapping, passing and shooting the ball. His vision, place kicking and shooting stood out – probably the best around!”

“He’s also very strong, his physicality on the ball is great.”

Like anyone though, Blyan had his weaknesses. “His fitness level, endurance and speed needed work, but that’s all behind him now,” explained Bossio.

He worked on himself and worked hard. Not including his time away from school, he’d practice five hours a week and that expanded to ten. Now he’ll get to rub shoulders with the pros as a ball boy for Edmonton’s pro team. It’s a start and young Blyan can hardly believe his good fortune.

“It means so much, it’s a real privilege,” he beams.

With his passion and dedication, who knows. Maybe he will prove to be among that mere one or two percent exception that beats the odds. Only time will tell.

In the interim, says SIRENS president Frank Klemen, his organization will host a few more events to raise the necessary dollars for Blyan’s spring trip to Vancouver. Anyone wishing to somehow show their support and contribute to Kobe Blyan’s trip are asked to attend an April 17 tribute to Elvis and Roy Orbison at the Coliseum Inn and/or an April 26 concert featuring blues singer and world-renowned lap guitarist Sonny Rhodes at The Studio. Further information is online at SIRENS The Charity.