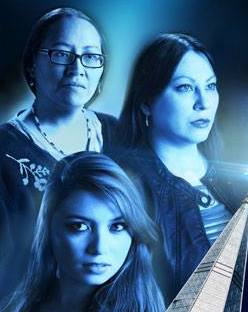 An up and coming Edmonton film company will premiere their latest production this month at the Jasper Short Film and Media Arts Festival, followed by a screening at the Edmonton Short Film Festival in October.  A Raven’s Song, written by director Daniel Foreman and produced by Groove Soldier Productions, centres around a Native teen battling familiar adversity faced by the Aboriginal community. The Edmonton Arts Council provided seed money to help get the project off the ground.

It was filmed the weekend of May 23-25, 2014 in and around Edmonton’s inner city, featuring locations such as Sacred Heart Church and the Medicine Shoppe Pharmacy on Jasper Avenue and 90 Street.

“We have done a lot of research into inner city issues such as gang activity, native spirituality, and the impact of residential schools on First Nations’ peoples,” said Foreman. “For example, we have spoken with elders, police inspectors, survivors and the priest from Sacred Heart Church.” 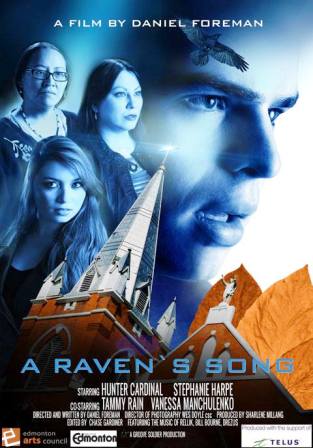 A Raven’s Song will be screened at the Jasper Short Film and Media Arts Festival Sept. 27 and then the Edmonton Short Film festival on Oct. 4.       Article by Brandi Morin

The main character, Daniel played by Edmonton actor Hunter Cardinal, struggles with a life or death decision when grappling to save the life of his ill grandmother (Kohkum) who can’t afford her medicine. Daniel’s grandmother raised him after he was abandoned by his mother and the two share a tight bond. During his quest to help her he encounters a gang of women who intend to rob him. Oddly, the gang leader ends up sympathizing with Daniel and befriends him vowing to aid him in his pursuit. The climax of the tale is played out when the time comes to choose between moral rightness and stealing the prescription his Kohkum so desperately needs.

Foreman has a few films under his belt, however this is the first Aboriginal themed film he has undertaken. Recently re-connected to his Metis roots, Foreman said he’s always wanted to do this type of film and that the story was written and developed over a six year period.

The film touches on serious issues like the generational effects of the residential school system, racism, and poverty. Foreman’s goal is to help bring these difficulties to the attention of mainstream society and facilitate opportunities for discussions and resolutions.

He pointed out that they received incredibly strong emotional reactions from the actresses because as Aboriginal women they identified with the story.

It was his goal to solicit strong women for the film because of their emotional wealth in comparison to men, but also because they can be cunning and vicious yet still play a vital role in the healing and reconciliation process. 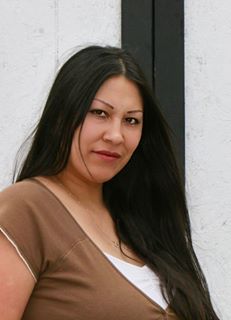 Edmonton actress Stephanie Harpe plays the role of the gang leader and said it wasn’t too hard to play the part drawing from past experiences. Harpe plays Rita a band council member on the critically acclaimed TV series Blackstone and recalled her encounters with gangs and violence after her mother was murdered in 1999. At age 23, Harpe fell to pieces over the tragedy falling into regular drug use and ran around the streets of Edmonton.

“I wanted to numb myself because I didn’t want feel anything,” Harpe recollected. “It was a horrifying experience. I ran into gangs and saw how they operated and I saw horrible things.” Although she refused to join a gang she said she quickly learned how to be tough.

Now married with children, Harpe quit drugs 14 years ago, however when it came time to audition for the gang leader she reached inside to bring out the “old Stephanie.”

Of her character in the film she said she fights a battle between wanting to keep up the façade of having no weakness and wanting to help Daniel.

The gang life is no life for anyone, Harpe said and it comes with extreme pain and loss.

“Our people are hurting each other on the streets. But the film is trying to show you how you can be one thing and then change into a totally different thing. I’m a living example that you can do something with your life. I think this film could really help to inspire some change.”

Groove Soldier won a $10,000 grant from the Telus Storyhive community powered funding program and the film will be featured on Telus Optik TV.

A Raven’s Song short film was short listed and is appearing at the Jasper Short Film and Media Arts Festival on September 27th, 2014.  Located in the idyllic Rocky Mountains, Jasper is the jewel of Canada’s National Parks and a magical venue to host this inaugural event.  The film is screening October 4 in Edmonton at Concordia University College during the 2014 Edmonton Short Film Festival. For more information head to www.groovesoldier.com