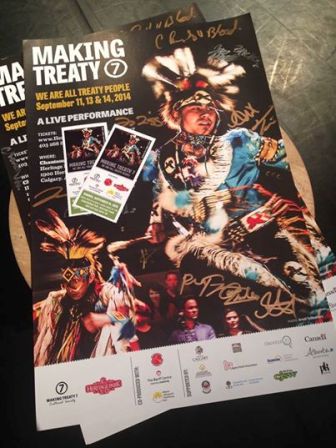 Making Treaty 7 is a groundbreaking theatrical presentation that debuts this week in Calgary at the Heritage Park Historical Village.  The production breathes life into the history and legacy of the founding event of modern southern Alberta with spellbinding performances by a diverse ensemble cast of wonderfully talented Aboriginal and non-Aboriginal actors, musicians, dancers and poets.

Making Treaty 7 is a must see for all Canadians as it explores the historical significance of the events at Blackfoot Crossing in 1877, while investigating the consequences and implications of Treaty 7, 137 years later.

The City of Calgary is known as one of the Cultural Capitals of Canada and the production of Making Treaty 7 certainly enhances this designation.

The first Making Treaty 7 production included four sold-out performances in April 2014 at the Canmore Opera House; the second production, which includes several new performers, gets underway September 11, 13 and 14 with 7:00 p.m. performances in the Chautauqua Tent at Heritage Park in Calgary. 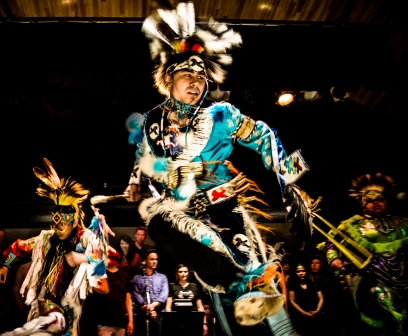 We are all Treaty People –  from Making Treaty 7, photo by Arnell Tailfeathers.    Article by John Copley

“Making Treaty 7 is an important undertaking that will allow Canadians from all walks of life the opportunity to see and understand how the treaty has impacted Indigenous peoples in this region and beyond,” explained actor/co-director Michelle Thrush, an award winning Cree actress who has more than 40 professional credits in film, television, stage and theatre.

The innovative production was developed over a three week period in Banff and the result is incredibly informative, educational, fascinating and insightful.

“Making Treaty 7 is an educational tool that will benefit both Aboriginal and non-Aboriginal peoples and hopefully encourage other Treaty areas to consider similar projects that highlight and give credence to the sacrifices made by Indigenous peoples in Canada,” noted Thrush. “The play is energetic, lively and often quite emotional; the actors, actresses, singers, comedians and other performers involved in the project share their stories and their experiences and in doing so allow the world to get a glimpse of the impacts that Treaty 7 had on the Indigenous peoples of southern Alberta.”

Thrush, who called the Making Treaty 7 production “a work in progress” said the play tells the story of behind the signing of Treaty 7, “made possible with the endorsement of the Chiefs of Treaty 7, and the community of Treaty 7 Elders.”

The mandate of Making Treaty 7 is an evolving nexus of activities that includes themes of cultural literacy, education, historical commemoration, tourism, and a revitalized appreciation for First Nations identity and perspective.

Blood Tribe Elder Narcisse Blood has been involved in the Making Treaty 7 initiative for the past three years as an Elder, historian and advisor. 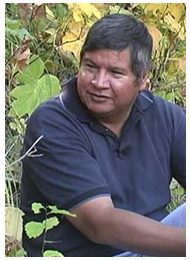 “I had to brush up on my acting skills,” joked Blood in a recent interview, “because this play is really a first for me; it is an amazing honour to be able to work with so many incredible people, so many gifted performers. Making of Treaty 7 is a relevant piece of work, one that offers a great deal of insight into the treaties and the consequences that came with them. Each and every performer has an important story to share, a meaningful message to deliver; the play has incredible educational value and I urge anyone who hasn’t been to a performance to do so.”

Elder Narcisse Blood commented on the play and some of the content. He spoke about the loss of the buffalo, the devastating effects of diseases, especially small pox, the ecosystem and a way of life that changed forever with the arrival of settlers in the west. He also delved into the present, talking about the federal government and Stephen Harper’s penchant for ignoring and making light of the problems that continue to plague and wreak havoc on Indigenous peoples. He encourages people to speak out, to become a part of the solution, noting “communication is everything and those who see the play Making Treaty 7 will understand just how important it is for us all to communicate and to try to understand each other a little better.”

Elder Blood said that he is “very pleased to have been a part of this outstanding project, one that has set the groundwork for generations to come. Wonderful work is being done to enlighten society about the truth behind the treaties, the injustices that were perpetrated upon Indigenous peoples and the stereotyping and myths  that continue into the 21st Century.”

Making Treaty 7 is an inspiring and educational piece of work; interested readers can check out the website at:www.makingtreaty7.com to view, in its entirely, the first performances offered earlier this year. Comedy routines, songs, dances and stage performances highlight the devastating floods that invade First Nations communities, they focus on global warming, the damage being done to Mother Earth and a growing  population that puts self indulgence and self gratification ahead of all else.

The performances, which are delivered by an impeccable cast of both experienced and novice entertainers and production people, offer insight into the myths and stereo-typing that Aboriginal people have dealt with since the first settlers made their way to the shores of Turtle Island. One spoof sees two gentlemen eying the land and determining what type of economic opportunities they can create to make them rich – at the expense of the Native peoples who they were pushing aside to make room for themselves. Another delves into the story of how “sharing the land” was inevitably interpreted as “surrendering the land” by those who wanted it for themselves. Another highlights the Crown’s intentions behind offering reserve land and promises of payment, sharing the bounty and commitment to maintaining ongoing treaties as long as the grass grows, the sun shines and the rivers flow. 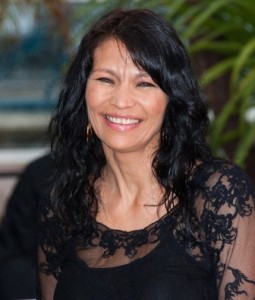 The introduction of alcohol and the cultural and lifestyle change that resulted from false promises, deceitful dialogue and intentional stereo-typing are also brought into focus through the imagery and words of the actors, actresses, dancers, singers, writers, comedians and storytellers who participate in Making of Treaty 7, a multi-tiered and tightly woven extravaganza of ongoing tales and truths about past, the present and a future. Residential Schools, small pox that decimated an estimated 80 per cent of Treaty 7 citizens, the slaughter of 60,000,000 buffalo on the prairies, the isolating of Aboriginal peoples into small, rural, government-created communities – the list goes on. The Making Treaty 7 production is a must-see event and one that will create much dialogue both during its presentations and well into the future.

“We are hopeful that other treaty regions will create similar programs,” noted Thrush, who said that plans were in the works to take the current Making Treaty 7 production on tour, including possible performances in Great Britain, with whom Treaty 7 was first signed.

For more information on the Making Treaty 7 presentation, it’s cast, production and directing crews, showtime agenda and its past performances, visit www.makingtreaty7.com.