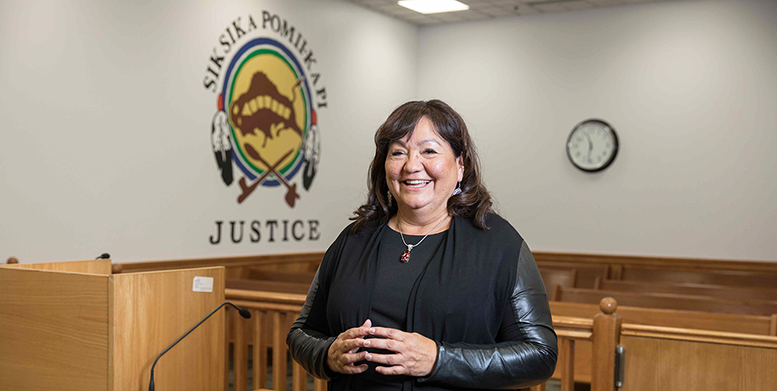 (ANNews) – Minister of Justice and Solicitor General, Kaycee Madu, has appointed eight new judges to the Alberta Provincial Court of Canada, which is the largest number of judges to be appointed at once in at least the last two decades.

One of the new judges is Grace Auger, a member of the Bigstone Cree Nation in Treaty 8 Territory.

Auger has been appointed to the Lethbridge/Southern Region and will officially begin her duties on August 3, 2021.

She served as a Crown prosecutor for almost seven years before shifting to Legal Aid Alberta as Duty Counsel, where she remained until her judicial appointment.

She is also a decorated lawyer as she has been the recipient of many awards, including: the Esquao Award for Justice, the Women in Law Leadership Award, and the University of Calgary’s ARCH Award for Alumni Career Achievement.

The process to becoming appointed is a long one as only lawyers with at least 10 years at the bar can apply to become a Provincial Court of Alberta judge.

The applications are considered first by the Judicial Council, which recommends applicants to the Provincial Court Nominating Committee. The committee then selects candidates, interviews and makes recommendations to the Minister of Justice and Solicitor General.

Madu says the appointments have been made in order to better reflect the diversity present in the province.

“I congratulate all these worthy appointees and wish them success in their new roles as judges of the provincial court of Alberta. This group of appointees represents the diversity present in Alberta and will help increase access to justice for Albertans,” said Minister Madu.

“These appointments make progress on my commitment to have our justice system reflect Alberta today. Our province will be better served by the elevation of these appointees to the bench, and I thank them for agreeing to serve Alberta.”

The Indigenous Bar Association of Canada (IBA) congratulated Auger on the appointment by saying she “is an inspiring example of strength, dedication and resilience of Indigenous women throughout turtle island.

“Throughout her exemplary career, Judge Auger has remained steadfast in her promotion of Indigenous restorative justice practices and the culturally appropriate sentencing of Indigenous offenders. She was a fixture at the community-oriented Tsuut’ina and Siksika Courts, and a reliable, consistent voice for those unable to represent themselves in criminal, family and administrative proceedings.”

“As is undoubtedly true for the appointment of Judge Auger, the IBA believes that any candidate for the Canadian judiciary must be fully aware of the desirable and necessary systemic changes that are needed to ensure justice for Indigenous Peoples within Canada’s ongoing process of reconciliation,” said the IBA.

Legal Aid Alberta also shouted out the new appointment in a Tweet saying, “Congratulations Honourable Judge G.M. Grace Auger! We know you will have a profound impact on the lives of many Albertans.”

Below is the complete list of the newly appointed judges: