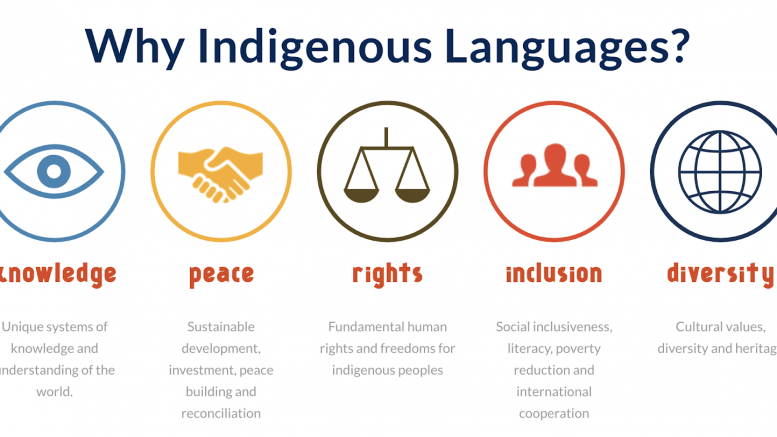 Bill C-91, the Indigenous Languages Act, supports the meaningful implementation of Calls to Action 13, 14 and 15 of the Truth and Reconciliation Commission of Canada, elements of the United Nations Declaration on the Rights of Indigenous Peoples and the federal government’s commitment to a renewed relationship with Indigenous Peoples based on the recognition of rights, respect, cooperation and partnership.

“In the realm of the International Year of Indigenous Languages, I am proud to be introducing this important and historic legislation in the House of Commons,” stated Pablo Rodriguez, Minister of Canadian Heritage and Multiculturalism.

“I want to recognize the extraordinary work done by the Assembly of First Nations, the Inuit Tapiriit Kanatami and the Métis National Council. I look forward to continuing this important work with them over the coming months.”

Assembly of First Nations (AFN) National Chief Perry Bellegarde welcomed the tabling in Parliament of the federal Indigenous Languages Act, saying it deserves the support of all Parliamentarians and all Canadians.

“This is landmark legislation to protect and strengthen Indigenous languages, the original languages of these lands, that embrace our identity, our worldview and our nationhood,” said National Chief Perry Bellegarde.

“No Indigenous language in Canada is safe. But now there is hope. This legislation will support First Nations efforts to keep their languages alive, vital and strong. Canadians and all parliamentarians must support this Bill because we all understand that language is identity, languages is culture, language is life. There is no better way to mark 2019 – the International Year of Indigenous Languages – than to see the country that once tried to eliminate our languages enact a law to protect, promote and revitalize our languages.”

The Indigenous Languages Act was tabled on February 5 in the House of Commons with the aim of it becoming law before the end of the current Parliamentary session. The initiative to co-develop legislation to “protect, promote and revitalize Indigenous languages” was first announced by Prime Minister Trudeau in December 2016 at an AFN Assembly. The announcement was a response to years of advocacy by First Nations, Metis and Inuit leaders.

Last week on February 1, National Chief Bellegarde spoke about the legislation in his remarks to the United Nations General Assembly as the North American Indigenous Representative: “We need legislation to ensure sufficient, sustainable and long-term funding toward the revitalization of our languages.

“We need schools on-reserve as well as in urban and rural settings to create and implement effective bilingual and immersion education programs beginning with pre-school age children. And we need programs that inspire all of our people to speak our languages, regardless of age, to renew the vibrancy of our communities as our cultural places. We want our languages to be our living languages – sourced from our lands, expressing our creation stories, and alive in our ceremonies and daily lives.”

The text of the National Chief’s remarks at the UN are available on the AFN website at www.afn.ca. The United Nations declared 2019 the International Year of Indigenous Languages to encourage urgent action to preserve, revitalize and promote Indigenous languages.

The Métis Nation welcomed the legislation and the effect it will have on the protection and promotion of the Michif language, the national language of the Métis people and Nation.

“The bill marks a giant first step in Canada’s support for our longstanding struggle to preserve, revitalize and promote the use of Michif which has been the most neglected of Canada’s Indigenous languages,” said Métis Nation Minister of Heritage and Culture Clara Morin Dal Col. “I wish to commend the Government of Canada for enabling the Métis Nation to participate in the co-development of this legislation.”

Language and culture are among the priorities of the Canada-Métis Nation Accord which the Métis Nation leadership  signed with the Prime Minister in 2017 toward the renewal of the Métis Nation-Crown relationship on a nation-to-nation, government-to-government basis.

“We salute the Prime Minister for acting on this priority,” said Métis Nation President Clément Chartier. “The bill recognizes that the rights related to Indigenous languages are among the rights recognized and affirmed by section 35 of the Constitution Act 1982 so this is reconciliation in action.”

The legislation introduced this month recognizes and supports all Indigenous languages in Canada and contains mechanisms which will:

A collaborative approach was adopted with Indigenous Peoples to develop the legislation, which included 12 fundamental principles, co-developed to inform the basis of the legislation. More than 50 intensive and collaborative engagement sessions were held across the country to collect elements of importance to be included in the legislation. These sessions were attended by over 1,200 individuals. Canadian Heritage also received approximately 200 electronic submissions from the online questionnaire.

The work with the Assembly of First Nations, Inuit Tapiriit Kanatami and the Métis National Council will continue in the coming months through the next stages of the legislative process.