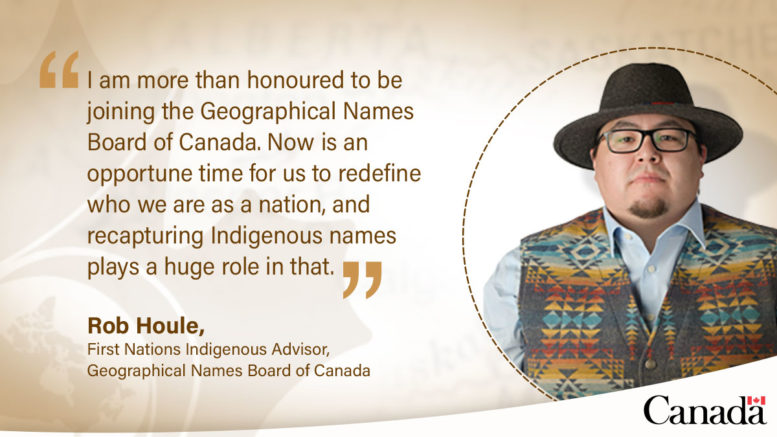 (ANNews) – On March 2, 2022 the government of Canada announced the appointment of a new Indigenous Advisor to the Geographical Names Board of Canada (GNBC).

Rob Houle, a member of the Swan River First Nation, will serve as the new First Nations Indigenous advisor to the GNBC for a two-year term ending in 2024.

Originally established in 1897, the GNBC serves as the national coordinating body responsible for official place names across Canada. The GNBC is composed of 29 members, including a Chairperson, with representatives from each provincial and territorial naming authority and several federal departments and agencies.

Minister of Natural Resources, John Wilkinson, said, “I would like to formally congratulate Rob Houle on his appointment as the new Indigenous Advisor, in which capacity he will continue the work in recognizing, preserving and strengthening Indigenous histories, languages and cultures in Canada.”

Houle will be replacing Ava Hill, the first Indigenous Advisor to the GNBC who held the position from March 2021 to March 2022.

He will serve as a full voting member of the GNBC and will actively contribute to the Board’s discussions and activities. His duties will include:

– Providing culturally appropriate advice, perspectives and insight on historical, geographical, cultural and linguistic matters to aid the Board in developing enhanced policies;

– Improving collaboration and ongoing relationships with Indigenous Nations and communities;

– Assisting in the development of guidelines, principles and procedures regarding Indigenous place names and naming conventions;

–  and promoting and representing the work of the GNBC.

“I am more than honoured to be joining the Geographical Names Board of Canada,” said Houle. “Now is an opportune time for us to redefine who we are as a nation, and recapturing Indigenous names plays a huge role in that.”

“By reconnecting and reminding each other of the true history of this land, we will grow closer not only as a people but also as a country. Only then, will we be fully embracing the journey to Reconciliation and respecting our shared heritage.”

In an interview with the Globe and Mail, Houle said that during his term he would like to reconnect the country with the history of its names, believing that colonialism has caused Canadians to forget Indigenous peoples and languages connection to original place names.

“There are old names and places where you wouldn’t expect to find them,” he said, “but that tells me that there’s an older history there that probably needs some fleshing out in order to understand who else was there and what the relationships were like.”

While the GNBC has a First Nation advisor, they have said that the board is actively looking for two Inuit and Metis advisors.