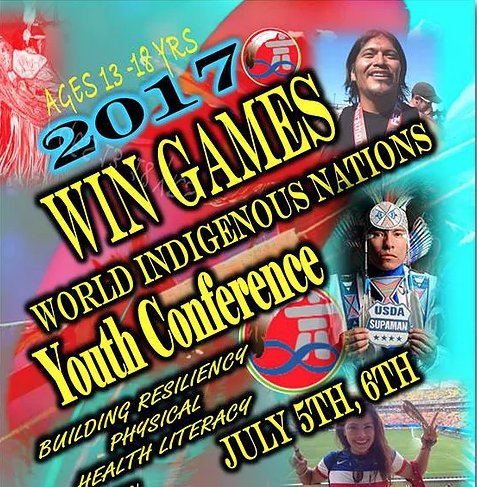 (Treaty 6 Territory, July 5, 2017) – In conjunction with the World Indigenous Nations Games 2017 being held in Maskwacis today, there will also be an International Youth Conference. The Youth Conference will be held at the Nipisihkopahk High School from July 5 to 6, 2017. The organizers are pleased to announce the Youth Conference will feature some very highly qualified and sought after Indigenous leaders and facilitators, who strive to ‘Build Resiliency In Our Youth.’

On day one, Christian Takes Gun Parrish, also known as ‘Supaman’ and Waylon Pahona are the key note speakers. Supaman is a member of the Apsaalooke Nation, and makes his home on the Crow reservation in Montana. He is described as a humble Native American dancer and hip hop artist who has dedicated his life to empowering youth and educating listeners with a message of hope through culture and music. In 2005 he won a (Nammy) The Native American Music Award for his group “Rezawrecktion” and has since released three self-produced projects which have all received national recognition and awards including the 2011 North American Indigenous Image Award for outstanding hip hop album.

Waylon Pahona who is Hopi, Tewa and Maricopa Piipaas created the Healthy Active Native Facebook page. Garnering over 60 thousand likes, the page has been a source of motivation and support for people throughout Indian Country. At the end of day two there will be special performances by Supaman, Tom Crier and Jason Makinaw (J-Mac).

On day two, keynote presenters include Sharon Firth, Tamryss Land and Steve Collins. Firth is a former four time Olympian in Cross Country Skiing. She is also the first Indigenous woman to be inducted into Canada’s Sports Hall of Fame. Lane is from the Lummi Nation. She has competed professionally and internationally in soccer and is very well-known in the sport industry as she was a former contributor on Fox Channel’s Football Fone-in. Steve Collins is also a former Olympian in Ski Jumping. Collins was ranked 12th in the World Cup Circuit when he pulled off a stunning victory, winning the World Cup and World Junior Championships in 1980. At 17 years of age, Collins earned Olympic glory with an impressive 11th place finish in the 90m jump and 28th in the 70m. Pablo Green, an athlete from the Panama delegation will be providing the last keynote of the day.

The keynotes will be joining local presenters in facilitating breakout sessions in diverse topics such as: Maskwacis Cree language, Turtle Island teachings, Teepee teachings, Music is Medicine, Flexing, No Gym No Problem, University life, Resiliency on the Rez, Nike N7, Resiliency, Elder Teachings, Indigenous crafts, Healthy eating, Traditional games, and There is always hope, Yes go to university. There will also be a “Special Guest” performing for the youth at the end of the Conference.

We encourage youth not to miss out on this unique opportunity. The Conference is free to all youth. Youth can register when they get there. The Conference runs from 9 am to 3 pm each day.