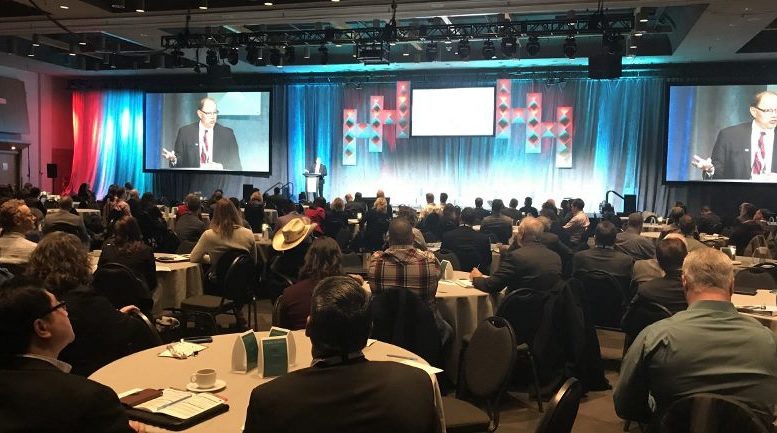 Chief Charles Weaselhead was on the main stage of the Forward Summit delivering the closing remarks in February 2019.

The three-day gathering saw more than 40 First Nations communities from across the province and beyond gather to participate in a series of roundtable discussions and workshops in an effort to discover and discuss ways for Indigenous communities to get more involved in business entities that include mining, forestry, oil and gas, hydrocarbons, renewable energy, capacity building, marker access and much more.

“The overall goal of the Summit,” noted Connect Partnership Group Marketing and Conference Manager, Aaron Kerr, “was to give Indigenous people a voice and the opportunity to collaborate with other communities as well as with Indigenous and non-Indigenous business and with non-Indigenous industry.”

Kerr lauded the work done by the Forward Summit Leadership Council and the Summit’s two co-chairs, J.P. Gladue, President of the Canadian Council for Aboriginal Business (CCAB) and Chief Charles Weaselhead, a former Chief of the Blood Tribe and the former Grand Chief of Treaty 7.

The Summit got underway on February 26 with an Opening Prayer by Matin Heavy Head (Kainai Nation) and a warm welcome by Chief Lee Crowchild (Tsuu T’ina First Nation) and concluded on the afternoon of February 28 with a Roundtable Discussion: Breaking Down Barriers and a 45 minute workshop: Making Welcome – the Art of Hiring Indigenous Talent. The remainder of the Summit was spent focusing on dozens of important topics that braced such things as: establishing common objectives in the workplace and in the community, the economical potential Indigenous trusts, capacity building, attracting and sustaining economic participation, Indigenous business opportunities in the power sector, renewable energy, forest recertification, increased potential in the hemp and cannabis industries, creating pathways to employment opportunities and much more.

Kerr said that he’s received “an incredible amount of positive feedback and energy from every sector” participating in the Summit, something he says will only get better next year when the group comes together for a second time.

“People thought the conference was very well run, that it embraced many important topics, and they felt welcome and comfortable as they spoke to others during the various panel and breakout sessions,” he said. “In terms of the survey, we had about a 96 percent overall satisfaction and 91 percent said they’d had conversations they believed could or would result in new business opportunities for themselves, their companies and/or their communities.

Feedback included these words from several who attended the three-day conference.

“As a non-Indigenous professional, the Forward Summit gave me opportunity to learn and understand about economic reconciliation and what needs to be done to ensure that First Nations people are part of Canada’s economic plan for sustainability and growth.” – David Franko: Tsuu T’ina Contracting General Partners Inc.

“As an Indigenous businessperson, I was most pleased and found good value in the round table discussions in afternoon sessions. There were several very good presenters, many of whom were young talented Indigenous people. I thought the round table discussions had good participation by the people in the room, especially from Indigenous people speaking freely, sharing their experience and insights from historical and present-day perspectives. This kind of interaction goes along way to meaningful truth and reconciliation.” – Errol Wilson,  Alberta Indian Investment Corporation

“In an age where we only read about conflicts and failures in the media, it was incredibly refreshing and instructive to hear so many stories of successful business initiatives among our indigenous communities.” – Rob Beamish,  CEPA Foundation

“As a non-Indigenous businessperson looking to advance economic reconciliation, Forward Summit was a fantastic opportunity to learn what initiatives are in progress, how to get involved, and make new connections to Indigenous communities and allies. I highly recommend this important conference.” – Stephanie Jackman,  Reap Business Association

The February Forward Summit brought more than 500 delegates, 32 exhibitors, and organizations and more than 40 Indigenous communities from across Canada. Indigenous and industry leaders joined this initiative to share experiences and ideas to further the goal of economic reconciliation. The format for the three-day conference included high production panel sessions with a combination of Indigenous and industry thought-leaders. Main panel sessions provided information on key topics surrounding economic and workforce landscape for Indigenous communities and businesses.

Attendees were then invited to join the roundtable discussions and workshops to get more involved and share their experiences with expert panelists.

“I thought the Summit was a very big success and something I believe we will all learn and grow from,” noted Chief Weaselhead, who was recently (March 16) elected as Chancellor of the University of Lethbridge.

“The Forward Summit was a good opportunity to have a gathering of the Aboriginal leadership, the economic development arm of our Aboriginal communities and leadership of the majority of Alberta’s non-Aboriginal industry in general in the same room to talk about the current projects that are happening and the potential for more positive outcomes with the opportunities that are currently available.

“We spoke at length about the best practices available to engage Aboriginal partnership with industry. The program focused on the concept of reconciliation and economic development. We had a tremendous list of guest speakers, including current Aboriginal business leaders and non-Aboriginal business and a wide range of industry leaders. It was a great opportunity to talk about the challenges we face and also to talk about the success stories that are taking place in current partnerships between Indigenous and non- Indigenous enterprises.”

Chief Weaselhead said he fields many calls from “non-Indigenous business seeking more information about the concept of reconciliation and how they can participate in it with us. I think that working together is always the best policy and I can see that is now coming together in meaningful ways.”

Over the course of the three-day Summit, Indigenous and non-Indigenous attendees embraced the opportunity to collaborate and share experiences during various activities. Encouraged by the unique exhibition floor layout, networking lounge and reception, Forward Summit created an intimate environment that fostered new relationships and grew existing ones. Through the Forward Summit meeting app, attendees connected with like-minded individuals and scheduled meetings in the networking lounge. The feedback obtained from delegates indicated that the networking aspect of Forward Summit helped evolve the conversations introduced in key panel and roundtable sessions.

The focus shifted from Indigenous economies, the theme of session topics on day one and two at the summit, as HR professionals joined the conversation in a full day of panels and workshops related to Indigenous workforce development. Workforce Forward discussed employment and education as an avenue to Economic Reconciliation and included panel sessions such as Creating Pathways to Employment and Indigenous Youth Participation in STEM fields.

Forward Summit also incorporated an employment program for Indigenous youth. The Indigenous Students Career Fair, hosted by LYNX Indigenous Career Connection, encouraged students and alumni to come down and converse with organizations actively looking to recruit within the Indigenous community. Participants in the Career Fair included: Westjet, Syncrude, Suncor, Imperial and others.

The Connect Group exists to produce events that make an impact. The organization conceptualizes, finances, and executes large-scale, world-class events that enhance the experience of all participants. From consumer events, to trade shows and conferences, The Connect Group does it all. Having launched over 150 events for major brands across the world, they’ve learned what it takes to bring a concept to life; and they know what makes an event successful.