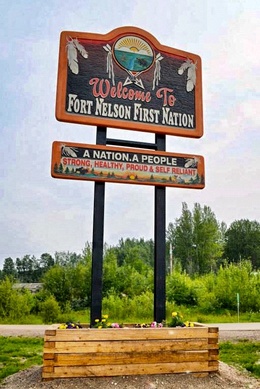 FORT NELSON, BC–(Marketwired – July 18, 2017) – Fort Nelson First Nation (FNFN) has filed for a judicial review of the BC Oil and Gas Commission (BCOGC) approval of Rockyview Resources Inc.’s recent gas pipeline project. The project is slated to cut across a critical habitat of the boreal woodland caribou, a provincially and federally recognized species at risk.

FNFN’s challenge of the BCOGC’s decision comes because the BCOGC failed to adequately consult or consider FNFN’s requests and concerns, or information related to threatened caribou populations. The project moving forward would also harm FNFN treaty rights to harvest caribou.

“The 39km proposed gas pipeline cuts right through core caribou habitat in our territory, in an area with the most concentrated and highest known use by boreal caribou for forage, calving, rearing and protection from predators,” says Lana Lowe, Director of FNFN Department of Lands & Resources. “This area has been important harvesting grounds for our people, but in particular, the area contains very important habitat for caribou, which our people have relied on for many generations to feed our families.”

“It’s important to stress that as a nation, we support and encourage economic development opportunities in our territory,” says FNFN Acting Chief Sharleen Gale. “We look to proactively engage both proponents and the crown on development opportunities so that they can be planned in a way that creates long-term benefits for our members while also respecting our lands, water and treaty rights.”

FNFN’s approach to successful working relationships with proponents focuses on early engagement, joint planning and co-development. This includes having steps taken by the proponent to engage respectfully with the nation to properly understand their concerns. Projects must also adhere to environmental standards compatible with those of the nation.

Throughout the application process, FNFN made strong submissions to the BCOGC regarding the proposed pipeline. This included developing a plan (the FNFN Caribou Report) to support the recovery of the caribou in that area, and a consultation process specific to the proposed project application. The BCOGC refused the invitation to work out a specific consultation process, and deemed it not practical to consider the FNFN Caribou Report. This resulted in the BCOGC using inadequate and incomplete data to determine that the proposed pipeline poses ‘no material adverse effect’ (MAE) to the caribou populations in the area. The BCOGC has not provided a clear explanation of this determination.

After several failed attempts by FNFN to meet with the BCOGC, the project was approved on June 23, 2017.

“The BCOGC demonstrated an inadequate, unlawful and wholly unacceptable approach to consultation with FNFN regarding how this pipeline will impact boreal caribou in our territory,” says Lowe. “There is no evidence to suggest that the herd is stable, yet the province and Rockyview Resources insist that it is. 84% of boreal caribou habitat in B.C. is within FNFN territory. We clearly have an interest in saving and helping restore caribou populations, and for this reason, our community has chosen not to hunt caribou until the population stabilizes. We expect the same stewardship ethic from companies who wish to access our territory for economic purposes.”

The approval comes only months after the BC Government committed $27M to a comprehensive caribou recovery program demonstrating its commitment to species at risk. Declining caribou populations is an issue that is of grave concern in light of both provincial and federal caribou recovery objectives, as well as FNFN treaty rights to harvest caribou. With clear efforts on the part of both FNFN and the BC Government to stabilize the caribou habitat, it makes no sense to approve and invite a pipeline project that directly conflicts with that goal.

“FNFN wants to support projects in our territory. We also need proponents to engage with us early in the planning process, commit to building long-term relationships, and operate in a way that supports FNFN development objectives,” says Acting Chief Gale. “We know from experience that finding this balance is what creates lasting benefits.