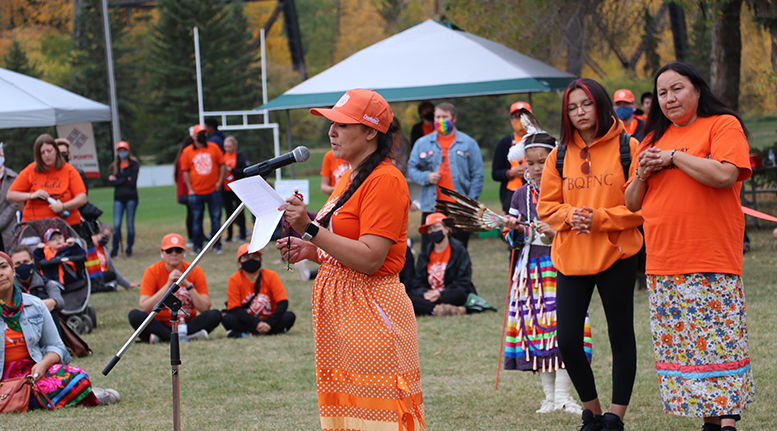 (ANNews) – With September 30, 2021 on the books as the first-ever National Day for Truth and Reconciliation, events of all kinds were held across the country, especially in First Nation, Metis, and Inuit communities but also in hamlets, towns, cities and rural locations.

You name it, it happened – rallies, songs, dances, art exhibits, music, films/videos, speeches, and storytelling. Huge gatherings of supporters of the reconciliation process joined forces in solidarity, Indigenous and non-Indigenous people alike, en masse by the hundreds, even thousands, at major centres like Toronto, Winnipeg, Ottawa, and Vancouver. 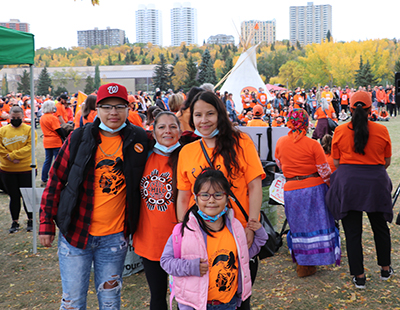 Participants young and old enjoyed the Sept. 30 Run/Walk event held on the first ever National Day for Truth and Reconciliation.

In Edmonton, this is a time of year when students generally don their bright orange ‘Every Child Matters’ T-shirts and march to City Hall to observe Orange Shirt Day and then gather indoors for speeches about residential schools, survivors, and reconciliation. There was a noticeable difference this year, due to the COVID-19 pandemic.

With far greater numbers of Albertans contracting the virus, requiring hospitalization, and needing treatment in intensive care units and with more fatalities occurring as well, a variety of outdoor activities were held where better safety measures were possible.

One of the highly successful outdoor events in Edmonton was the Orange Shirt Day Run/Walk: Every Child Matters.

With principal organizers, law student Anita Cardinal-Stewart and Adam Erasmus at the helm, the run/walk registered just over 400 participants to complete distances of 2.15 kms, 5 kms or 10 kms through the beautiful YEG river valley trails that wind their way from Kinsmen Park to Hawrelak Park.

The wide, well-groomed trails allowed for fast and easy maneuvering for almost all participants, regardless of their ability and/or mobility. The take-off point from Kinsmen Park was below the east side of the High Level Bridge and proceeded west to Hawrelak Park, then back to Kinsmen.

At this year’s event, the young children started the first leg of the course by travelling the 2.15 kms distance. They were then followed by the adults in two separate shifts – depending on whether they’d chosen the five kms or the ten kms distance. 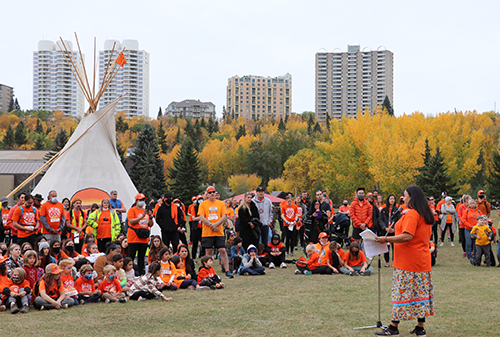 Attendance was diverse with an approximate 50/50 split of Indigenous and non-Indigenous participants who were accompanied by pets, carriages, and baby strollers, and supported when needed by walkers, canes, and wheelchairs. They started with determination and returned with smiles on their faces under a canopy of warm golden sunshine.

As each participant arrived back at their original take-off point, they were gifted a wood-carved medallion bearing this year’s art image used to adorn the orange shirts they received in addition to an orange ball cap.

There were 50 volunteers helping with the event including several medics and fortunately there were no reported injuries.

Prior to take-off, participants were invited to gather at the nearby Indigenous Art Park where Elder Elaine Fox from Little Pine First Nation, Saskatchewan performed a smudging ceremony and shared prayers for strength, safety and success of the participants as well as for the event itself.

The goal was to “connect, support and foster the relationships of Indigenous peoples and the advancement of programs and initiatives that advocate for the maintenance of Indigenous identity through spiritual, cultural, and traditional practices,” said the organizers.

“This will be an annual event,” boasted Cardinal-Stewart. “We are already planning for next year.” 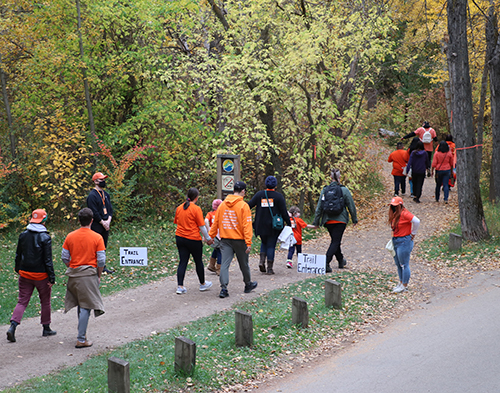 Because it was a trial first-year event, organizers capped attendance at 400 but are aiming for much greater involvement in future. “Next year we want to have 1500 participants,” quipped Cardinal-Stewart.

She said they’ll need “the support of communities and organizations for the 2021-2022 year.” One of their principal objectives is to raise funds to support “the interests of residential school survivors and the painful but necessary locating of the remains of those children who did not come home,” she added.

With over one thousand unmarked gravesites near residential schools in Kamloops, BC, Cowessess Nation in Saskatchewan and Sioux Valley Dakota Nation in Manitoba, expert opinions figure these numbers are just the tip of the iceberg with far more to come as communities discover additional sites.

“We join all those who mourn our lost relatives, and we condemn the injustices inflicted upon them, and voice our recurring outrage,” the organizers said. 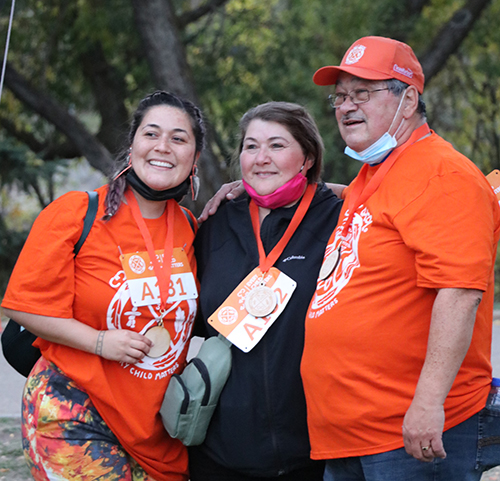 Cardinal-Stewart said that the day was a success and she heard from “a lot of people that there was a feeling of love” at the event. Organizing the walk/run required a “balancing” act to do so much advance work given the demands of her studies at university, meeting her family needs and simply allowing time frames for the details. “It was quite the learning curve,” she said in relation to getting sponsors and operating the event – but definitely a successful one. She loves running and the “healing” it provides, in addition to its value of bringing people together.

Anita Cardinal-Stewart is a Nehiyaw (Cree) member of the Woodland Cree First Nation in Peace River country. She is an ultra-trail runner and the founder of Indigenous Runner Yeg, as well as a wife, mother and kokum who is on her way (3rd year) to becoming a lawyer. She is president of the Indigenous Law Students Association at U of A and president of the National Indigenous Law Students Association.

Adam Erasmus hails from the Goodfish Lake First Nation and is also an avid track and trail runner who partners with a running group associated with drug and alcohol recovery. He’s been connecting to his cultural roots and works to bring awareness to Indigenous residential school harms and healing.

Be sure to go online in early September 2022 for the next listing of Orange Shirt Day activities. In the interim, “we are planning a Canada Day half marathon called, Run for Reconciliation,” said Cardinal-Stewart.

Click here for our photo gallery from the Sept. 30 event.  Photos by Terry Lusty.