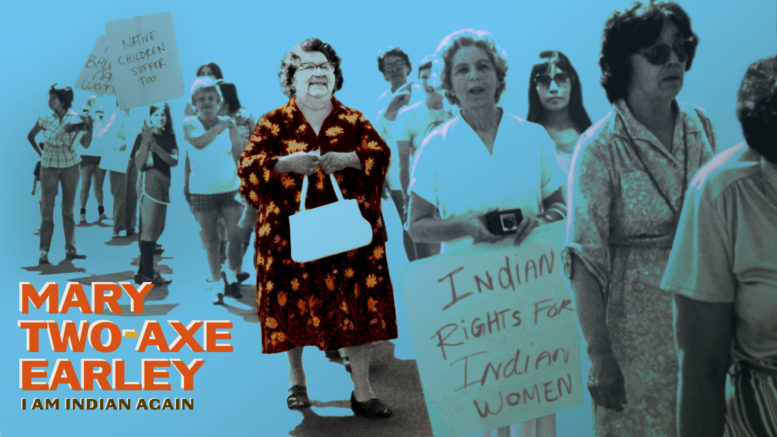 (ANNews) – Award winning filmmaker Courtney Montour has already had an enviable career as a documentarian, let alone as an Indigenous woman working in a white, male dominated industry. But her latest work, Mary Two-Axe Earley: I Am Indian Again, may be her most historically poignant film to date. The National Film Board of Canada agreed, adding Montour’s latest offering to their stable of content. 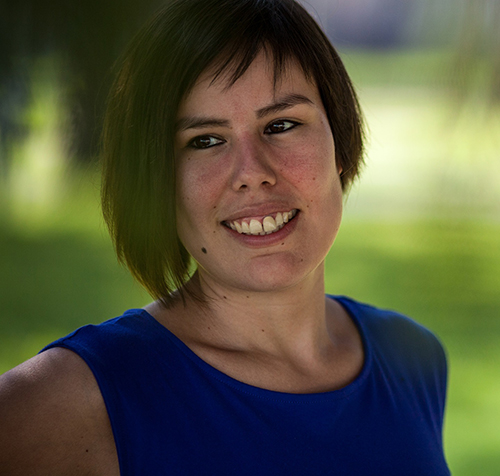 The subject of the film – Mary Two-Axe Earley – began earning her reputation as a woman’s rights activist during the ‘70’s, after she lost her “legal Indian status” by marrying a non-status man. Through the next few decades, Earley tirelessly advocated for changes to the Indian Act, fighting against both the elements of gender discrimination and cultural stripping of rights to First Nations women.

It must have been a remarkable moment in the filmmaker’s career, focusing her lens on a fellow Kahnawake, Mohawk woman who impacted so many Indigenous Canadian women’s lives. The other remarkable point is that those people whose lives were changed, will only now be able to learn the magnitude of Mary’s tireless efforts in the Canadian women’s rights movement.

Using never-before-seen archival footage and rare audio recordings, Montour was able to foster a deeply personal, albeit one-sided relationship with her subject in a way only two strong Indigenous women could. Combined with stellar research and powerful editing, this is a jewel of a film whose historical significance cannot be exaggerated.

Mary Two-Axe Earley: I Am Indian Again screened at the recent Edmonton International Film Festival, along with four other features, and the audience response to Montour’s project was overwhelming.

ANNews connected with Courtney Montour the following morning to deep dive into the person behind this remarkable work.

When did you know that being a filmmaker was what you wanted?

CM: Back in 2008, someone recommended Mushkeg Media Inc, to me (mushkeg.ca), out of Montreal. They’re a Cree production company that was hiring Indigenous people interested in film to learn all the various aspects and that was where I started. What a great, supportive production company! I had the chance to do everything, from sound, a little bit of editing, production manager, all those kinds of things. I think it’s really important to have those mentorship mechanisms in place so that everybody, including Indigenous artists have the opportunity to figure out what they want to do. From there, I continued and directed with them as well as with other production companies.

Your films are mostly documentary in nature. Do you see yourself ever broadening into fiction?

CM: Of course, that’s a possibility but I’m really drawn to documentary; to be able to share our Indigenous stories and histories through real life, first-person accounts. It’s always amazing to be able to learn, and so honouring to meet so many people across this country and learn about their stories.

What do you think is the percentage of the audience that hadn’t known Mary Two-Axe Earley’s story?

CM: Many people don’t know. I’ve even spoken to people in Indigenous Studies programs in universities who haven’t heard of her (laughs), and that says a lot. She’s just so important because [Mary’s] one of these pivotal people who really sparked a movement for change against sex discrimination. And there are so many women after her who were so important and that’s why I listed them at the end [in the credits]. I wanted people to have a starting off point to go and learn more once they got to the end of the film.

It must have been so powerful to hear, for the first time, the audio tapes that had never seen the light of day.

CM: This particular project would not have been possible without Alanis Obomsawin. That is where this project started – with the gift of the recordings she offered me. [Obomsawin] has been creating film on our Indigenous issues for over 50 years and she sat down with Mary in 1984 in Mary’s home in Kahnawake [and recorded the audio tapes].

It was four years ago, back in 2017 when I was gifted those recordings. Having that chance to listen to Mary was very emotional. Especially when I got to the end of the recordings; knowing there wasn’t more there. I just felt a close connection to her after listening to the recordings and, (as I said in the film), I wanted the audience to have that same experience. That is why it’s so important that everything came from Mary’s voice and Mary’s perspective for this first-ever film on her. It’s her guiding us and we get to connect with her.

It’s such a vital piece of Canadian history.

CM: Yes, these laws are so incredibly complex and it’s challenging to fit that into a 30-minute film (laughs). So, it was important to show the personal experience and how it impacted woman and how women like Mary have dedicated their lives to make these changes.

Full sex equality hasn’t been reached for First Nations women and that’s something not known. So, for me, it was really important to bring the present day into this film, to bring in Jodi Calahoo-Stonehouse and her daughter Isabella. It’s to show there are women today that have been positively impacted by Mary’s work but have not heard her name, like many people. It’s because the history is not that easily accessible, and so we know that the work continues. There are still thousands of women still fighting in the courts to be recognized by the Canadian government to have Indian status.

Your work is also being added to curriculums across the country.

CM: For me, education and building those bridges in understanding, also between non-Indigenous audiences and Indigenous peoples is incredibly important. I’ve always worked in the educational field, and I continue to do that. I think film is such a wonderful way to complement education and learning and for it to be that personal, emotional experience to complement lectures and reading.