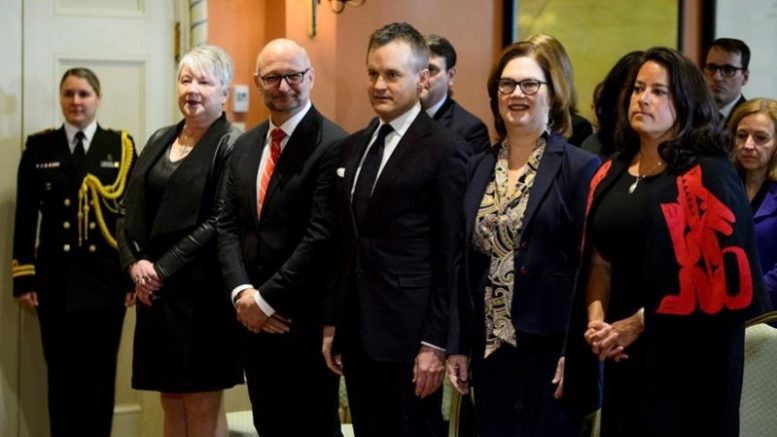 Coast Salish Traditional Territory/Vancouver: The First Nations Leadership Council is deeply concerned that the recent shuffle in the federal Liberal cabinet signals a wavering commitment to addressing Canada’s colonial history and to realizing a true nation-to-nation relationship with Indigenous peoples. Prime Minister Justin Trudeau announced adjustments to the government cabinet on January 14, 2019 with the appointment of Minister Seamus O’Reagan to the Department of Indigenous Services Canada, reassigning MP Jane Philpott to a Treasury Board appointment and the replacement of MP Jody Wilson-Raybould, now of Minister of Veteran Affairs, with Minister David Lametti, as Attorney General and Minister of Justice.

While BC Regional Chief Terry Teegee looks forward to working with the ministers in their new roles, the sweeping First Nations issues across this country require dedicated and consistent attention to ensure progress. “Advances made on the Nation-to-Nation relationship through reconciliation efforts and the work of Jody Wilson-Raybould and others has been positive and I hold up my hands to these ministers and the good work they have done.  However, continued momentum is required on these important efforts and I call on the new Ministers to ensure that this work continues and that the relationship between the Federal Crown and Indigenous Peoples continue to be a priority for this government.”

Cheryl Casimer, First Nations Summit political executive member said, “The Prime Minister has said on numerous occasions that there was no relationship more important to him than that between himself and Indigenous Peoples of his country. Important work is underway or near completion to advance policy reform to provide for the recognition and implementation of Aboriginal title and self-determination and introduce federal child welfare legislation that will clear the way for Indigenous jurisdiction over the delivery of child welfare services. The departures of Wilson-Raybould and Philpott from their previous ministries at this critical juncture when this important work is underway or nearing fruition signals that the Prime Minister is no longer committed to reconciliation and reforging Canada’s relationship with Indigenous Peoples, as a priority.”

“Prime Minister Trudeau committed to a renewed nation-to-nation relationship with Indigenous Peoples, based on the recognition of rights, respect, co-operation and partnership,” stated Grand Chief Stewart Phillip, President of the UBCIC. “The removal of these critical and well-respected Ministers, during a period of significant conflict and tension, demonstrates Trudeau’s lack of resolve to address Canada’s deplorable relationship with Indigenous peoples. The Prime Minister has made a very clear decision to completely abandon the reconciliation agenda in favour of supporting business and industry in terms of oil and gas infrastructure development and similar projects.  We would like to thank both Minister Wilson-Raybould and Minister Philpott for their dedication and care in their efforts to work in partnership with Indigenous peoples to come to mutually agreed upon solutions. We call on the Prime Minister to clarify how the reassignment of these critical Ministers during such a crucial time in their work will be for the benefit of Indigenous peoples.”

Prime Minister Trudueu appointed MP Seamus O’Regan (St. John’s South – Mount Pearl) as the Minister of Indigenous Services, a newly created department since 2017. He moves from his former role as the Minister of Veterans Affairs. O’Regan was a correspondent with CTV National News, and a former host of Canada AM which he co-hosted. New cabinet members include MP David Lametti (Quebec) as the justice minister and attorney general and who had been serving as a parliamentary secretary for innovation. MP Bernadette Jordan (Nova Scotia) joins the cabinet as minister of rural economic development. She previously served as a parliamentary secretary for democratic institutions.