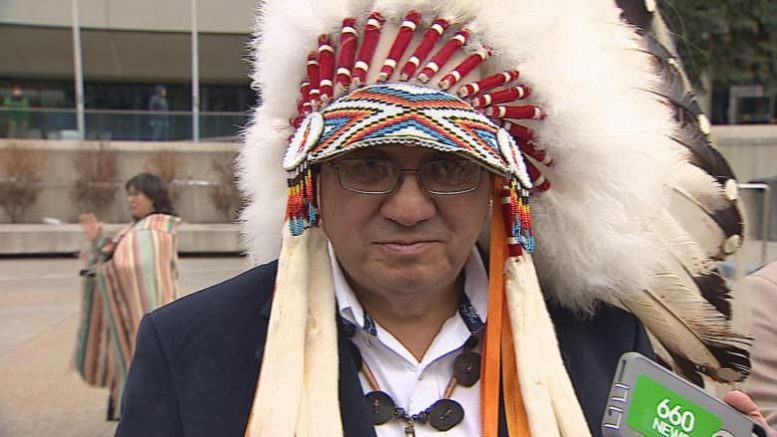 (June 12, 2019) – Blood Tribe Chief Roy Fox and Councillors are pleased to announce that a judgement has been received from the Federal Court on what is known as the “Big Claim” – a claim which the Blood Tribe has been pursuing for many years.

Justice Zinn of the Federal Court of Canada, in his decision of June 12, 2019 found that “Canada is in breach of the TLE formula in the Blackfoot Treaty of 1877 [Treaty 7] in regards to the size of the Blood Reserve. The Blood Tribe was entitled under the Treaty Land Entitlement formula to a reserve of 710 square miles, whereas the current reserve is 547.5 square miles.

“Canada is liable to the Blood Tribe for this breach of Treaty.”

The Big Claim was set out in 3 parts as follows:

The Federal Court’s findings agreed with the Blood Tribe’s claim that there was an outstanding Treaty obligation and that the Tribe is owed a further 162.5 square miles based on the population at the time.

Chief Fox and the Councillors are hopeful that the government will not appeal the ruling. They stated, “The Blood Tribe trusts that given the history of the Big Claim and the fact that both the ICC and the Federal Court have found that the Blood Tribe has a valid claim that Canada will not be appealing this recent judgement and that there will be finality to this long outstanding treaty obligation.”

Phase 1 was the oral history evidence of Blood Tribe Elders and was heard in May of 2016 in Standoff, Alberta. Phase 2 was a hearing on the substantive legal issues and was heard in Calgary in May and June of 2018. Historical and expert evidence was presented at that time. Phase 3 will deal with remedies or the damages that the Blood Tribe suffered.

Following that, the Blood Tribe requested that the Indian Claims Commission (“ICC”) conduct an inquiry into the claim in 2003. After all steps in the inquiry had been taken, including hearings in the community with a number of Blood Tribe Elders, the ICC issued its report in August, 2007. The ICC found that Canada should negotiate part of the Big Claim. Specifically, the ICC found that the Blood Reserve was created in 1882 and that a surrender by the Blood Tribe was required when Canada moved the southern boundary 5 miles north to the present boundary. As no surrender occurred, Canada breached its fiduciary obligations to the Blood Tribe.

As a result of Canada’s position, Blood Tribe Council reviewed all the options with respect to the Big Claim, including requesting further negotiations with Canada but ultimately there was no recourse but to pursue it through the Federal Court.

Now that the Federal Court of Canada has provided its decision Blood Tribe Council will be reviewing the options available to the Blood Tribe including the steps to bring this before the Court to have Phase 3 held and will continue to keep Blood Tribe members informed on the steps being taken in the Big Claim.

The Blood Tribe notes that Canada has set out in its litigation guidelines that decisions on judicial reviews and appeals should be subject to full consultation within government and be limited to important questions and that the Government of Canada will not judicially review or appeal every decision with which it disagrees.

They are hopeful that the government will not be appealing the ruling.

“The Blood Tribe Council thanks the many people that supported this Claim through the years,” stated Chief Roy Fox, “including the many Elders who have provided evidence at both the Indian Claims Commission hearings and the Federal Court, the Society members, the Chief and Councillors who never gave up, the Blood Tribe members who participated in the Blockade and the run to Ottawa, the technicians that worked on the claim, the legal team of Walsh LLP and the Elders who have passed on without seeing this result but continued to give us strength throughout.”